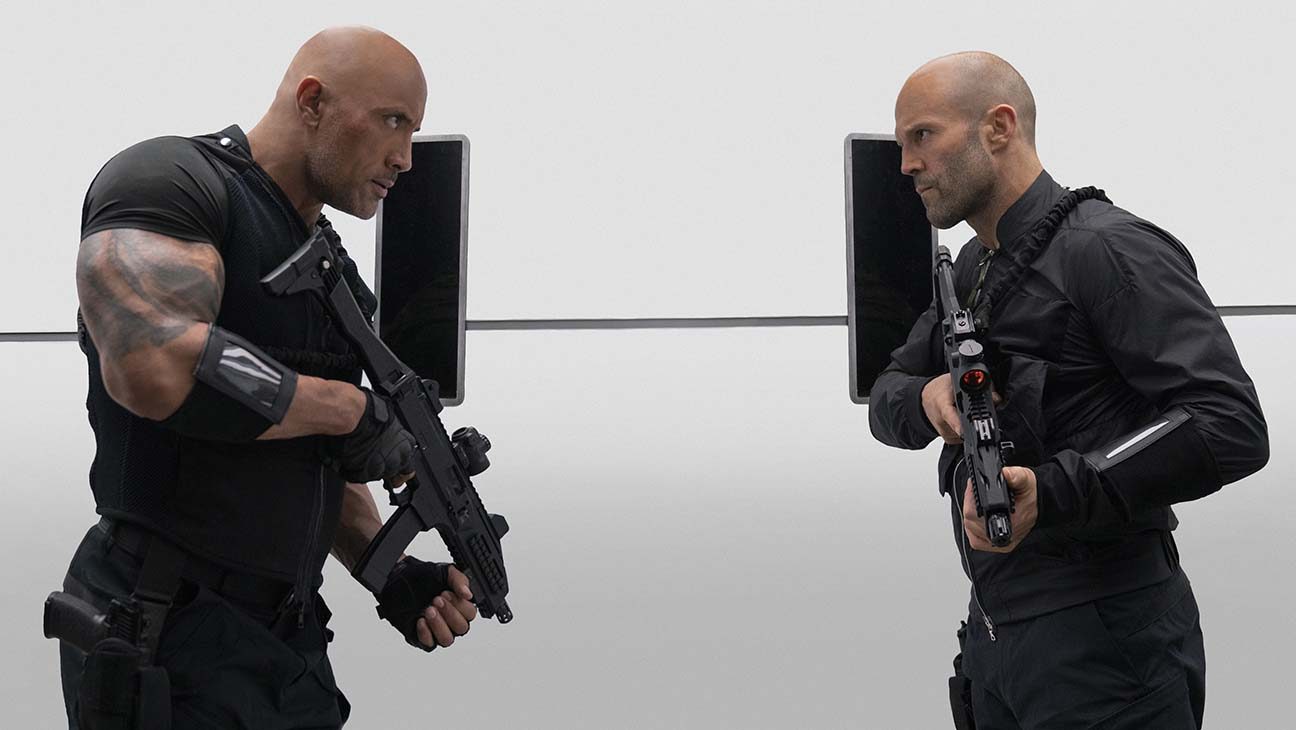 Buckle up. Adam has reviewed Hobbs & Shaw the only way that he knew how… Giving it 24 Cans of Monster out of 10.

Baby Oil, British Accents, Samoan Custom Trucks, the re-destruction of Chernobyl (not really but basically)… It’s all in a day’s work for Dude-Bruh-Supremes Luke Hobbs (Dewayne Johnson) and Deckard Shaw (Jason Statham) in the Fast and Furious world.  The first of what will eventually be 35 spinoffs of the very popular series builds its adventure for late summer fun.  Tango & Cash… sorry, I mean Hobbs & Shaw is the perfect anecdote for nothing. But it’s a lot of fun and executed in a way that just makes it… the most extra-extra of action movies.  A movie that recalls Tango and Cash, Midnight Run, GI Joe: The Rise of Cobra, Mission Impossible and The Rundown.

I’m not going to bore you with plot points.  What’s the use?  You’ve already made up your mind on this film, haven’t you?  I mean those that want to see it; well they’re going to see it.  Those that won’t, oh they’d hate it if they did go see it.  The 10th film and first Spinoff of the series that lives its life a Quarter Mile at a time has continued its ascent from Point Break rip-off to Super Franchise that has Cars facing off against Submarines, Tanks and anything else Governments of lesser economic fortune can provide to the producers (this time it’s an abandoned nuclear reactor, you Chernobyl-heads will love this one as a treatises on nuclear proliferation) all in the name of “Mi Familia”. Damn, that was a long run-on sentence.  But fitting when talking about F&F franchise (or Trips F as we will call if hence force in this review) because of the over-bloated nature of these enterprises.

If we must, recount the basics; Hobbs and Shaw are drafted by ex-CIA buddies to bring in Shaw’s sister (played by the amazing Venessa Kirby who between this and Mission: Impossible really should take over for both Franchises as defacto lead, she that damn good).  Turns out Sister Shaw was set up by … GASP! The man who should be Bond, Idris Elba, playing who I am sure is like a 115% version of himself aka the self-described “Black Superman” (even The Rock agrees at a certain point).  Idris “Black Superman” Elba not only set up her but a long time ago in Trip F’s history Brother Shaw (Jason Statham in full badass mode here, which just means he’s 88% Statham, because you can’t have 100% Statham without an R-Rating and some sort of contraceptive because with 100% Statham 105% of the Men in the audience would leave 7-months pregnant with Statham babies).  Hobbs, Brother Shaw, and Sister Shaw all team up to become the best kind of family; one that bickers and kicks ass.  Oh, and end up in the one place they’ll have an advantage over Idris “Black Superman” Elba… Samoa!!!  Of course there’s family strife, a badass Samoan Mother, Beer, Custom Samoan rides, more beer, a cameo by everyone’s favorite Cliff Curtis (in Samoan Pigtails no less!), some face-smashing time (but only a little bit), and of course The Rock baby oiled up like it was Summer Slam and Wrestlemania combined!!!

Hobbs & Shaw or its full name, Fast and Furious Presents Hobbs & Shaw is immune from review or critique because quite frankly there isn’t a way to properly review this film.  The film has been designed for the Trips F Family.  It has been shot, edited, and put out into the world using a lifetime supply of Monster, Baby Oil, Weights, Explosives, Fire, Martial Arts, and Custom Lift Kits that any sort of criticism of it would bounce off it as good old Kyle would as he punched a Brick Wall that looked like Dry Wall.  Hobbs & Shaw if you let it into your heart will pump it full of so much adrenaline it’ll grow three sizes too big and probably explode Scanners-style in your chest cavity.  You’ve been warned.

Rating is arbitrary as all Trips F Films are immune to anything.

Hobbs & Shaw is in theaters now