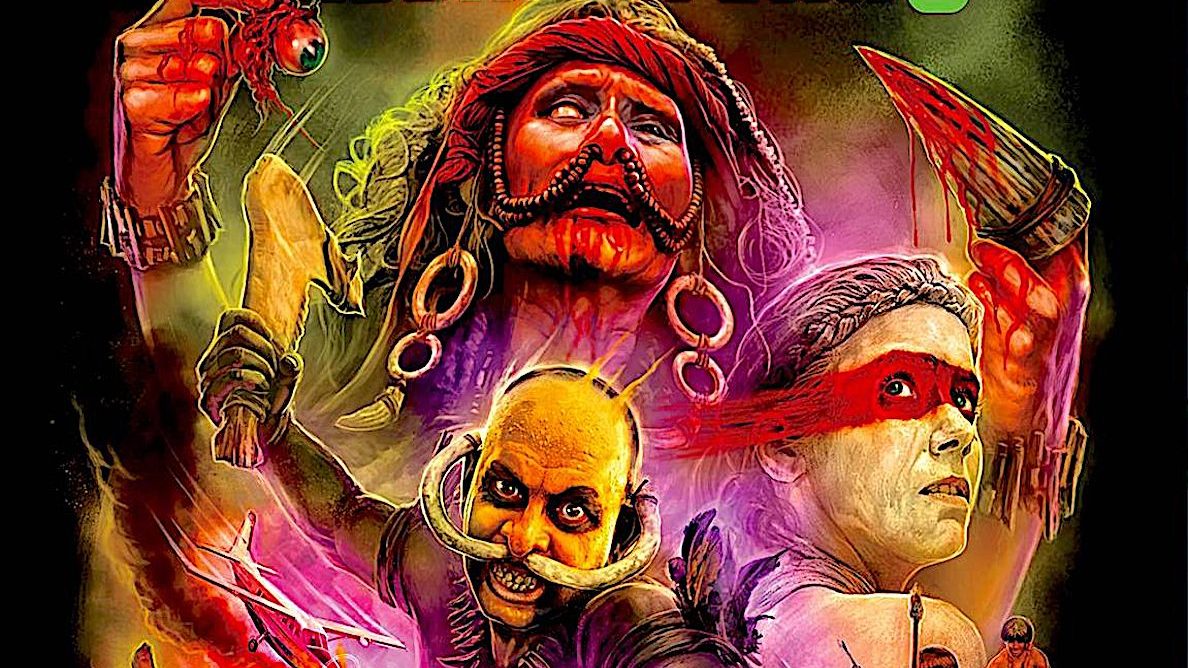 Adam assesses how The Green Inferno has aged much better than some of its horror counterparts. The film has been released in a new Blu-Ray Collector’s Edition from the fine folks at Scream Factory.

Many a critic will instantly tear down an Eli Roth film for no other reason than it’s an Eli Roth film. The Green Inferno was no different than Knock-Knock or Hostel or Hostel 2; slammed by critics. It is only now we understand the full breadth of what he was trying (and, successfully) critiquing; the Social Media rise of Social Justice Warriors.  The Green Inferno may be the most biting critique he’s created yet… and yes, pun completely 100% meant.

Justine (Lorenza Izzo) is a privileged freshman attending a privileged, albeit very Liberal, College looking to belong, looking to do something that matters.  She may have found this with a group of radical social activists led by the righteous Alejandro (Ariel Levy).  Their charge, to rid all Corporate involvement in the deforestation of the Amazon Rain Forrest.  Not impossible in the least.  Meeting the group finds Justine at odds with Alejandro as he sees her as “a rich girl” (his words), that essentially bullies her into action.  Using funds from the less than reputable source, a drug dealer named Carlos (Matías López), Alejandro along with Justine and a ragtag group of other college students that included Jonah (Aaron Burns), Amy (Kirby Bliss Blanton), Lars (Daryl Sabara), and Alejandro’s Girlfriend Kara (Ignacia Allamand) head into the Amazon Jungle to stop a Mining Company from continuing their deforestation of the Rain Forrest.  It works, kind of, and they are on their plane and back to the US, with bragging rights, in less than 24-hours.  And that’s where everything goes to hell.  A terrifying plane accident later they are faced with the Indigenous People they were there to supposedly save.  They quickly realize that this Indigenous Tribe is not there to help but there to eat them.

The Green Inferno may be Roth’s best work to date.  The way he is able to so clearly and concisely create not only a great Adventure Survival Horror film but one that’s so cutting of our social media age.  More than anything Roth’s narrative works like gangbusters.  The characters he introduces us to in the opening thirty minutes are not preachy-clean college kids.  They’re real in the way they bring their bullshit into the “activism”.  Justine’s ego is at play as much as her initial attraction to Alejandro.  Alejandro is self-righteous, a bully, and worse of all a narcissist of the highest degree, boarding on a sociopath.

Part of the brilliance of Roth’s work, both here and previously, is that he never paints a picture of characters that are pure.  Especially so here, he’s created a group of people that are not only rife their own issues but inner turmoil in the group itself.  The reason that his films are so front-loaded, something that other Genre Directors could learn from him, is that it allows for setting up the intricacies of both personal and interpersonal dynamics.  The Green Inferno lulls us into getting to know these students and regardless of their issues, liking them.

Those that are not fans of gore will probably outright reject the films over-the-top second half as the students come in contact with this Tribe of Cannibals.  Roth’s glee for the Grand Guignol-style theatrics of the Cannibal Genre is second to none.  People are bitten, ripped apart, hacked limb from limb, and all other manners of inventive death.  KNB’s FX work here is astounding, besting even their work on Roth’s Hostel Movies.  The seamless way they are able to not only use amazing practical work but the digital work within those set-pieces are beautiful in a way that gorehounds will appreciate.

The Green Inferno would just be another Gore-Heavy exercise in nihilism if it weren’t for the astute critiques that Roth is making not just towards these college kids but also more subtly the corporations that fund these sorts of mass extinctions.  The way that Roth is able to take these kids whose version of activisms is essentially retweeting an Article or angry Tweeting about the “mass genocide” of fill-in-the-blanks and placing them into the middle of the reality of the situation is one of the more fascinating plots of recent memory.  It is not that Roth hates these kids, far from it; it is the criticism of those that speak before actually understanding a situation that is much more volatile than they realize.  The Green Inferno shows these kids literally in a Friends-style version of New York where everything is Sitcom-Sanitized not realizing that their Retweeting or just Social Media Activism is as insulting as Corporations machinations.  Roth finds the criticism within the “how” they choose to be activists; the laziness of privilege.  The fact that they, within their blinding privilege, think that they can literally solve the deforestation issue in the Amazon all by themselves.  That sort of pretentiousness and arrogance is something that Roth showed a disdain for in all of his work beginning with Cabin Fever and has been so clearly refined and beautifully distilled here.

The Green Inferno will only grow in esteem within not only the horror community but within the film community writ large.  It’s because of Roth’s astute storytelling, character work, and the combination of gore and social critique that make this one a career-high point for the director.

Much of The Green Inferno was filmed using the Canon C300, a camera at the time that only filmed in 1080p.  I mention this because the film’s transfer is nothing short of miraculous. There isn’t any DNR or even Digital Noise that pops up, just a clean beautiful image.  The transfer never feels like “video” rather the transfer manages to look like film.

The Group Commentary that includes Roth, Producer Nicolás López, Izzo, Burns, Blanton, and Sabara is a jovial affair as the group discusses the difficulties shooting the film.  The commentary itself is more conversational and anecdotal than informational.  This was included on the original release of the film on Blu-Ray.

Into the Green Inferno with Eli Roth is a 50-minute interview with the director. Starting with Roth telling a hilarious recounting of a production story that’s too good to ruin.  Some of the information we learn about is his knowledge of the Cannibal Genre is deep, about how Diablo Cody helped push the idea of “Stoned Cannibals get the Munchies”.  The casting of the actors who were basically unknown (at the time). The use of the villagers in Peru as the cast. Actually going to Peru and seeing B-Roll On-Location footage, which is great. How he pulled together the gutsy and moxie it took, the communication barriers, the preproduction which sounds as interesting as the film.  How they showed the villagers Cannibal Holocaust and the village though this was a comedy. How the village as a whole agreed to let Roth and Company film in their village because they thought it would be great for the village.  The shoot itself and some almost unbelievable troubles while shooting in New York.  The Release and the troubles getting the film released in any form and the sequel has been written but uncertain future for what could be a franchise.  In lieu of a new commentary track with the director, this is the next best thing.  In fact, this reviewer would say this is better than a commentary track as the director is allowed to be non-specific and the great editing of B-Roll footage along with behind-the-scenes photos elevate this to the best feature on the disc.

Uncivilized Behavior- Acting in The Green Inferno is a 35-minute featurette with actors Daniel Sabara, Lorenza Izzo, Kirby Bliss Blanton discussing the trials and tribulations of filming The Green Inferno. Make no mistake; this is not fluffy actor-ly featurette.  Once they discuss the production it’s a very honest look at a very hard shoot.  They discuss the casting process, the production itself, reception and their thoughts on the film and its release.  Some of the great bits we hear and learn about; Izzo discusses her personal relationship with Roth.  Sabara confirmed that he drew on being stone from his life.  Roth’s directing style. The creepy bugs and animals that were roaming around freely “on-set” because it was a real-life village. Sabara discusses the infamous tarantula scene. Blanton discusses her side of the Snake scene that Roth has told in his interview.  The filming of the harrowing plane crash that actually sounds and shown to be just as harrowing as described (thanks to that b-roll footage).  There is much more that are discussed within the featurette and intercuts footage, behind-the-scenes b-roll throughout.

Behind-the-Scenes Footage is 55-minutes of raw (pun intended) B-Roll footage. There are a few comments made by Roth and others but no commentary on the footage though, just footage. They manage to show some of the major sequences being filmed including the helicopter escape and the killing of Jonah. The footage itself is captivating in the same way that the Les Blanks footage for Fitzcarraldo. It doesn’t get as bad but the footage is that kind of amazing, they are really there. This may be the crown jewel of the set as it shows just how hard the film was to make.

Making of The Green Inferno is a 16-minute featurette. This is more of a straight-ahead making-of that uses the b-roll footage from the previous featurette. It’s slicker and glossier than the previous special feature as this making-of forms a pseudo narrative with Roth, Sabarra, Magda Apanowicz, Blanton, Izzo and others commenting on the making of.

Lorenza Izzo featurette is a 1–minute archival interview with the actress.

Meet the Villagers featurette is a 1–minute archival interview with Eli Roth and the real-life Villagers that played Villagers in the film.

Amazon Jungle featurette is a 1–minute archival featurette that Roth and Company discuss the trials and tribulations of filming in the Amazon.

The Green Inferno is a biting horror social commentary.  Scream Factory has added some great featurettes and interviews.  RECOMMENDED!!!!