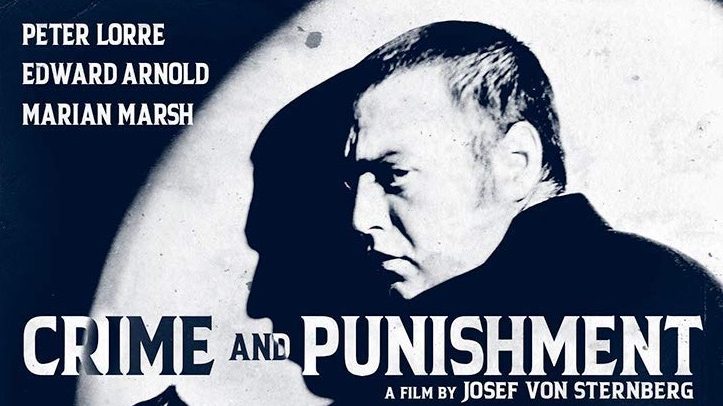 The only collaboration between Josef von Sternberg and Peter Lorre, this adaptation of the Dostoevsky classic finally gets a Blu-Ray release and is well worth the investment.

Just a few years after his vibrantly menacing performance in Fritz Lang’s M, Peter Lorre is now in Hollywood and attempting to establish a career in English language films. Crime and Punishment shows that he is more than capable of commanding the screen in whichever language he chooses.

Lorre plays Raskolnikov, a brilliant student of criminology who is driven to extreme measures when post-graduation career opportunities are lacking, and money is scarce. Shortly afterwards Raskolnikov is invited to use his expertise to assist the police in solving the crime he himself has just committed and the crime expert finds himself face to face with the man that the police inspector wants to charge with his own wrongdoing.

Conflict abounds in Crime and Punishment. How far would you go for money? For the people you love? For what is right? And afterwards, can you live with the guilt of not only the crime but the deceit too? How far can faith help you to cope with life’s struggles?

Alongside the questions around personal morals is also the issue of inequality in society. The monied and powerful ranks (all men) throw their weight about, using emotional blackmail, threats, and cash to subdue or persuade those in less comfortable circumstances (mostly women). With money at the root of everything, it’s only a small leap to understand why Raskolnikov resorts to the actions he does. Lorre moves swiftly and effortlessly from arrogance to fear, panic and guilt and back again, and it’s thrilling to watch.

He’s aided by some excellent cat and mouse-ery from Edward Arnold’s Inspector Porfiry, and a Dietrich-inspired good girl gone bad who attempts to save him (Sonya, played by Marian Marsh).

Von Sternberg directs as the master of German expressionism that he is; strange angles and shadows abound emphasising the conflict within, and the score is a perfect complement to the emotional notes.

Obviously distilling a 600-page novel into a 90-minute movie necessitates some serious editorial decision-making, but what makes it to the screen is compelling.

This Arrow Academy Blu-Ray presentation, transferred from original film elements, also comes with an array of special features including Light and Dark, an appreciation of Josef von Sternberg by critic and director David Thompson, and a German TV documentary from 1984 titled The Double Face of Peter Lorre.

Make time for this 80-year-old classic and you won’t regret it.