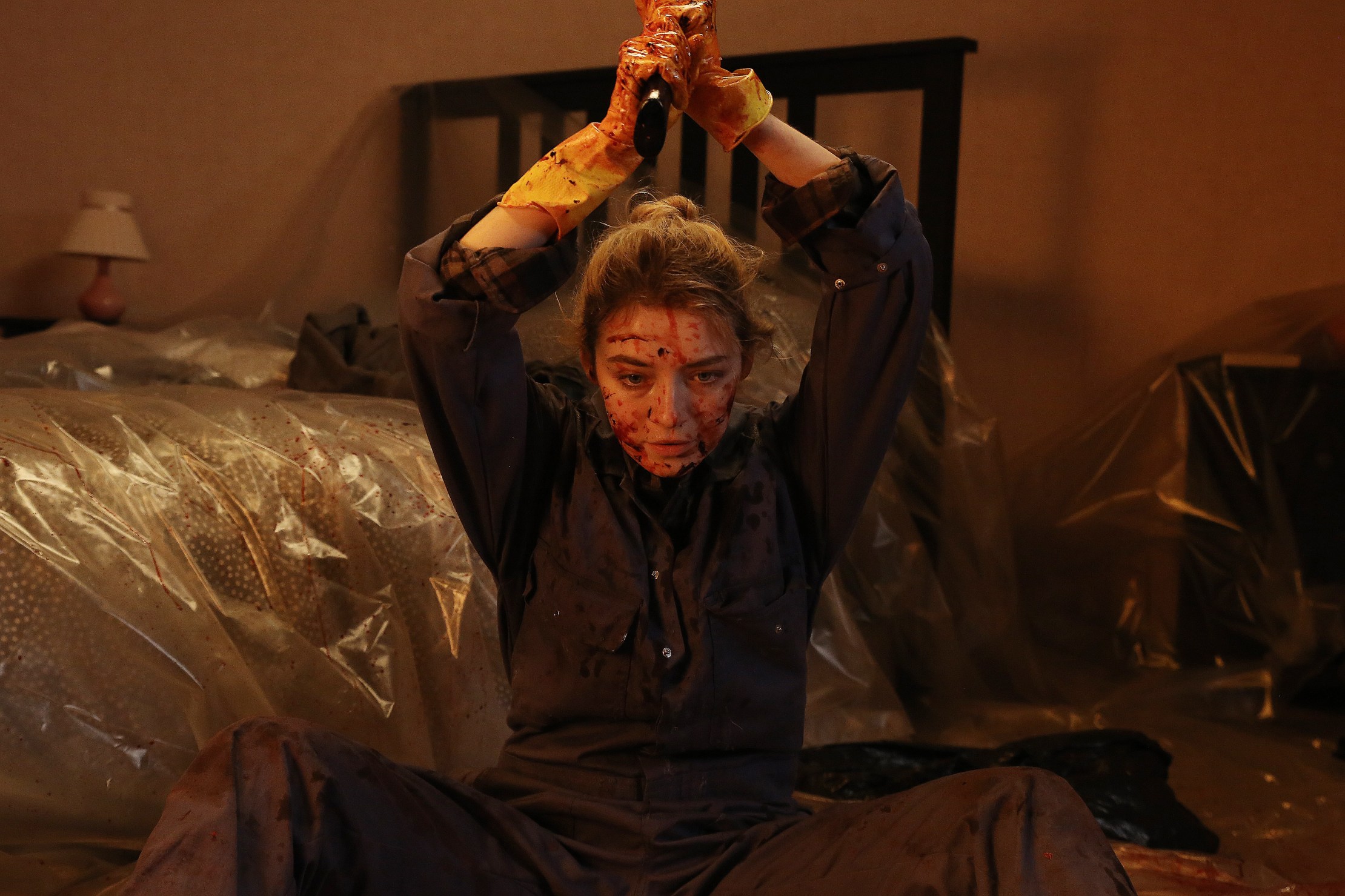 I’ll cut right to the chase: A Good Woman is Hard to Find, the new film from director Abner Pastoll (Road Games), is a stunner. Anchored by a fearless leading performance from Sarah Bolger (Into the Badlands, End of Sentence), this film is a tale of female empowerment that avoids talking the talk and instead walks the walk. Social commentary and rich subtext are expertly woven through this gritty crime film about a downtrodden widow who must find a way to survive when her family inadvertently collides with a vicious gang of organized criminals.

Sarah (Bolger) lives with her two children in subsidized housing in Northern Ireland. Her husband was murdered on “the estate”. He is buried in a pauper’s grave adorned with a simple wooden cross. Her young son, Ben, likely witnessed the crime. It’s uncertain what Ben knows because he hasn’t spoken a word since that fateful day.

Sarah herself seems frozen in time, paralyzed by this surprise she’s been dealt. Her mother is concerned about Sarah’s inability to cope and move on. “You’re too soft, Sarah. You always were,” she tells her. In one scene, we spy a photo of the former happy couple. Sarah looks radiant, bright red lipstick, shiny blonde hair. There’s an enthusiasm for life in her eyes. She looked nothing like the thin, sallow woman we see before us. Her mother asks her if she’s lost weight, if she ever eats. “You look like what’s-her-face from Popeye,” she criticizes. You can hear the unspoken concern behind the statement: How are you ever going to find another man looking like that?

The very environment in which Sarah lives is toxic. The loss prevention officer at the local supermarket initially taunts Sarah about her current state of poverty and eventually lets her know the only way out is on her knees or on her back. Local law enforcement ignores her pleas to find her husband’s killer. “Why don’t you leave well enough alone?” a female officer snaps at her when Sarah asks to speak to the detective assigned to her husband’s case.

As she attempts to buy her weekly groceries, Sarah comes up a little short on cash. She asks the cashier to put a few things back as she flushes with embarrassment and fumbles with her money. We’ve all been there, love, the cashier reassures her. The kindly store employee isn’t referring to people living below the poverty line. She’s referring to being a woman on her own. She’s saying, Honey, these fellas have it easy. They have no idea what it’s like being a single mother in an urban jungle like this.

Along with being a bang-up thriller, A Good Woman is Hard to Find examines the societal double standards for men and women. As a widow with meager financial means, Sarah is an object of pity. From her mother to various men she encounters throughout the narrative, Sarah is treated as being incomplete, insufficient in her solitude. Onlookers think she needs a man to complete her, to provide for her.

When the true plot of the film takes hold, leaving Sarah in the cross hairs of local mobsters, she is constantly underestimated. Does she get in over her head? Does she use the villains preconceived notions about her helplessness against them? A little of both? I’ll never tell. A Good Woman is Hard to Find has some clever twists and turns. They aren’t horror film twists. They’re developments that make perfect sense given the circumstances. They are the best kinds of twists: based on the audience’s erroneous assumptions about the characters and their pasts.

In fact, it’s worth pointing out that while horrifying things happen during the film, it’s not a horror film. A Good Woman is Hard to Find is making its way around the genre festival circuit, so it’s a natural tendency to categorize it. It can be gory and violent, but it’s not some kind of slasher film. I consider it to be a character drama with occasional violent outbursts. It’s a horror film only in the sense that the nightly news can be horrifying.

A Good Woman is Hard to Find is an unflinching look at what it’s like for a woman to be alone in a dangerous, misogynistic world. The men in Sarah’s orbit take what they want and seem surprised if a woman contradicts them or resists their masculine will. As one of the hooligans from the estate puts it, “What is it with women like you? Ya like to get knocked about.” He may regret saying that. Sarah might just hit back.

2 comments on “A Good Woman is Hard to Find: Fantasia 2019 Film Review”