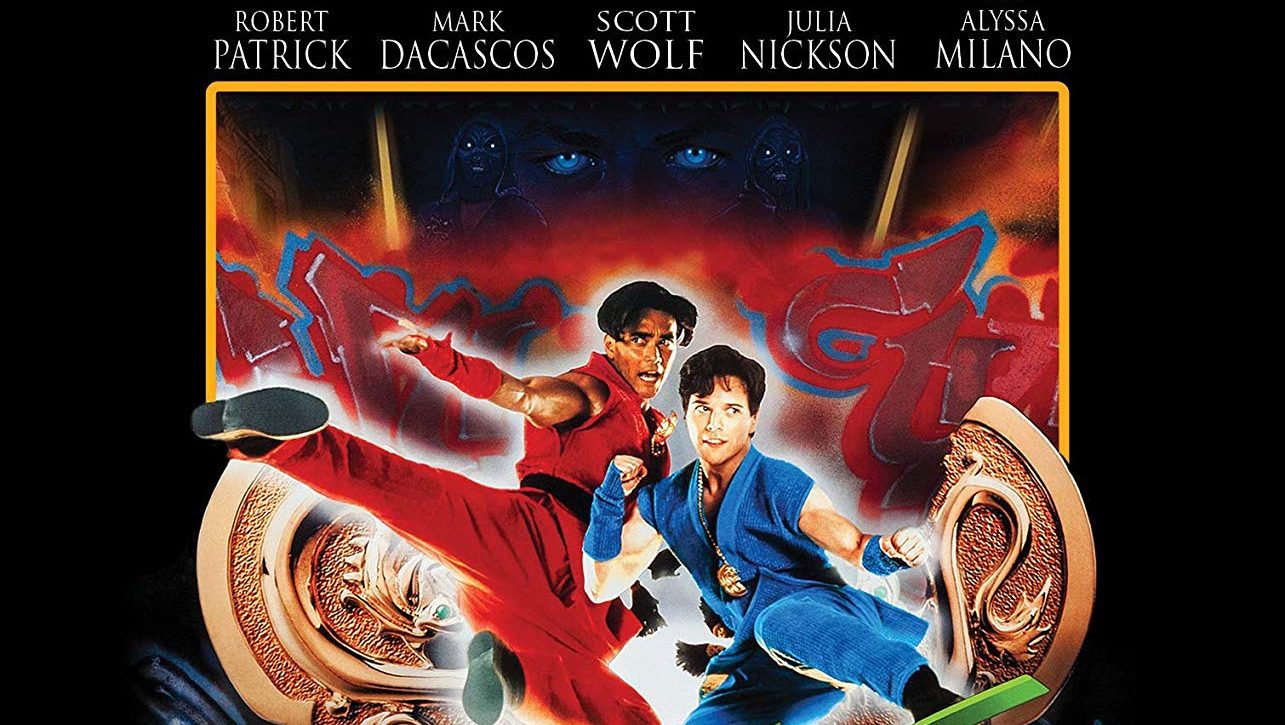 Move over Mortal Kombat, Double Dragon is about to occupy space with you in the Martial Arts Video Game Adaptations (we do not speak of Street Fighter).  The trifecta of Mark Dacascos, Scott Wolf, and Alyssa Milano is too much 90s for this reviewer to not fall in love with and fall in love hard.  The film directed by James Nickson is just this side of goofy fun in the same way that 1990’s Teenage Mutant Ninja Turtles was that you can love it irony-free.

For those that are not in the know (that amounts to 99.99% of you) the film tells the story of brothers Billy (Wolf) and Jimmy (Dacascos) Lee who in the future of 2007 Los Angeles has turned into an island (remember the film was made in 1994, keep up here).  The Lee’s unbeknownst to them are about to be embroiled with a mystical powerful medallion known as the Double Dragon (get it???).  The Double Dragon has been broken into two pieces, with the combining of both you receive ultimate power (e.g. your Kung-Fu is not just so-so but amazing). The Brothers Lee’s adoptive Mom (Julia Nickson, yes married to the director) knows that the brothers are tied to the legend but have not told them.  It is only when the Main Big Boss Victor Guisman (Robert Patrick with blonde frosted tips sporting some 90s Locs like he’s straight-up Wannabe Vato Cholo, I shit you not) comes searching for the other half of the medallion do the guys realize something bigger is at play.  The Lee Bros spend the rest of the film trying to figure out what the hell is going on as Marian (Milano) the leader of the Power Corps (a gang not some sort of new Utility Company) guides them to victory.

Minus the ephemera Double Dragon is a lean and mean action film in the way that PG-13 90s action films were.  There are enough real-life stunts, including a crazy fun jet ski chase, to make any action junkie a fan of this film.  The film isn’t half-baked in any way, they truly committed and spent time on the action.  More than maybe they spent on the script, plot, and ensuring they got the right cast (Scott Wolf, a Caucasian is cast in a role CLEARLY DESIGNED FOR AN ASIAN ACTOR!).  Though they lean so hard into everything they do, it’s almost impressive the way that the entire enterprise collapses under its own weight.

The unintended consequence of making something with so much conviction is when it misses the mark, there is usually ridicule and scorn to follow.  This is exactly what happened with Double Dragon.  The film is made with a “we’re making a huge hit that’s going to make us millions and produce numerous sequels” conviction.  Everything is so tangentially off by a wide margin one watching this film can either approach it two ways;

1. Reject it whole hog and hate it.

2. Allow it into your heart and soul.

This reviewer has gone the second route and let Double Dragon into his heart and is better off for it.  What Double Dragon has that other Video Game Adaptations from this era?  A strange beating heart that is so steeped and soaked in the 90s that it should come with a Hypercolor shirt, a Lisa Frank Folder, and a couple of Pogs w/ a collector’s Slammer.  Yes, that’s how 90s this film is, complete with strange CGI-Effects, a Mall, White guys doing Martial arts badly and Al Leung (IN A SPEAKING ROLE!!!).  Anyone growing up in the 90s owes themselves one go around with this little-seen Videogame Movie B-Grade Masterpiece.  Who knows, you may end up loving it.

The transfer for Double Dragon seems to be sourced from a theatrical 35mm print. It’s a very good one with very few scratches or issues. The consequence of this and no restoration is as though you’re watching the film in the best second run grindhouse you’ve seen a film at.  Those that are looking for complete perfection should adjust expectations.

The Making of Double Dragon is a new 68-minute making-of documentary featuring Scott Wolf, Mark Dacascos, Peter Gould, Michael Davis, Don Murphy.  MVD is quickly becoming the go-to Company when you’re looking for great in-depth documentaries about Cult Films.  They’ve gotten a great knowing documentary on the making of this piece of pop mania.  Starting with a very honest discussion of whyDouble Dragongot made the documentary only gets more entertaining from there.  The cast and crew discuss with a lot of affection and humor how this all went down.  They even manage to discuss the randomness of the Guisman name and also Wolf and Dacascos casting. Davis and Gould interviewed together are both hilarious and savage at taking apart of the hysterically inept production leaving no stone or piece of gossip unturned.  Even Dacascos reveals that because of the ineptitude of the Stunt crew sprained his ankle.  This documentary is as entertaining if not more so than the actual film.  Huge recommend on this, the crown jewel of this disc.

Don Murphy: Portrait of a Producer is a 24-minute interview with Murphy discussing his origins working with Jane Hampshire.  Murphy’s main focus discussing the obtaining the rights for Double Dragon and the complicated loopholes that they had to go through to get the rights to the videogame.  The producer discusses in very technical and honest manner what it took to get this film off the ground.  Much of it could seem like “name dropping” but a lot of working as a producer is the networking and making deals.  He also discusses how Double Dragon become a Film Threat Magazine on the cover and how discordant it was.  Murphy discusses most of his films that he produced including Permanent Midnight, Transformersseries, From Hell, and others.  He definitely discusses each of the films with honesty. Be forewarned that Murphy does discuss Bryan Singer and his work on Apt Pupil but does not discuss the legal and criminal issues that the film and Singer has gone through.

The archival “Making of” Featurette is a 5-minute EPK style making-of that was created at the time of release.  Lots of great b-roll footage and the actors trying the hard sell on the film.

Behind the Scenes Featurette is a 4-minutes of b-roll footage that looks to be created at the time to be included in Press Packets.  The footage is raw and comes unaccompanied with any narration just the production sound.  The footage is fascinating only because of how raw it is.

Double Dragon Animated Series Pilot Episode #101: ”The Shadow Falls” is exactly what it claims to be the first episode of the series that began in 1993.  The 22-minute pilot for those that have not seen it or not seen any early 90s animated adventure shows is pure cheese.  The show apes similarly styled shows like The Teenage Mutant Ninja Turtles, and Saaban’s X-Men: The Animated Series. The quality is not good but the show has a great goofy tone and the show has nothing to do with the video game or the film.  All the same fans will definitely want to check out this.

The Still Galleries are divided into Five Different Galleries.  Each gallery is accompanied by a piece of score or song from the soundtrack.

Never thought I’d be saying this but … Double Dragon is like the parlance of its time… is 2 Legit 2 Quit.  MVD’s Rewind Collection has done it again giving us a cult title from the 90s and supplying us a wealth of extras with it.  RECOMMENDED!!!