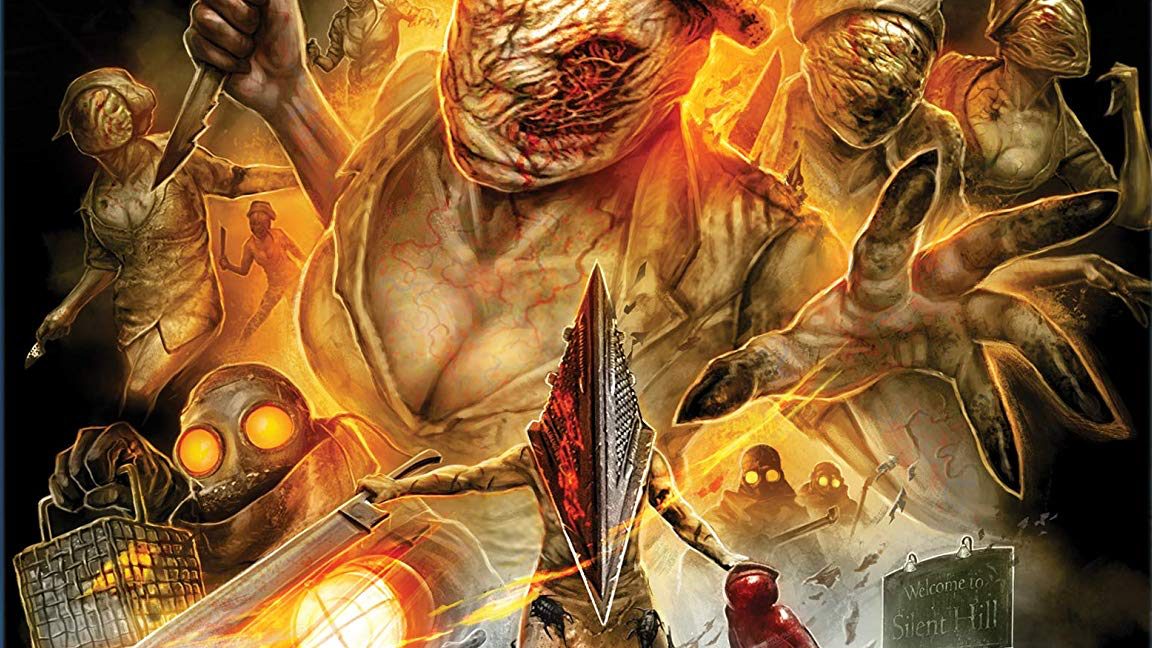 Christophe Gans has not had the career he should have. After The Brotherhood of the Wolf and Silent Hill, he should have been offered all the genre films that Hollywood had to offer.  He did not but we still have Silent Hill arguably one of the most underrated horror films in the last 15 years and one of the best Video Game Adaptations.

Rose (Rahad Mitchell) and Christopher (Sean Bean) have an issue with their adoptive daughter sleepwalking into dangerous territories (e.g. cliffs, highways) all the while mumbling about a town called Silent Hill.  Rose determined to figure out their young ward’s issue goes to Silent Hill. Tragedy, horrors, monsters, witches and what could possibly be hell awaits not just Rose and Sharon (Jodelle Ferland) but Motor Cycle Cop (Laurie Holden).  Will these three women find a way out of Silent Hill or is there no escape from a fate already written.

Gans working from a Script by Roger Avary creates a brilliant milieu and atmosphere throughout the film that is hard to argue isn’t a hell-worthy nightmare.  As the film begins to introduce us to the town and remaining citizens of Silent Hill, Avary’s script and Gans’ direction keeps everything slowly moving revealing small bits as the world literally melts away before our very eyes.  Once the nightmare begins nothing stops it, there is a sense of dread that feels like something out of Dante’s Inferno put onto the screen.

The artfulness that the imagery that is conjured up by not just Gans and Avery but the work of the Effects crews (both Make-Up and Visual FX) is astounding.  The film feels less like it is referential to cinematic versions of Hell but rather those seen by Master Painters Bosch and Bruegel. How Gans and Co. got away with some of the imagery is still astounding in 2019.  Furthermore, how Gans uses these images, not as some sort of “shock and awe” but as apart of the fabric of the story gives them that extra envelope-pushing that is understood by the greats that work in Horror.

It is not just the bleak ending that makes Silent Hill so powerful.  Rather its the time and care that Gans has put into not only the imagery which is striking and designed to tell some of the heavier expositions, especially at the end. The power comes from the strong work done by the actors who take the material with some heft.  With the work done here, it’s shocking that more did not fall in love with Silent Hill and hasn’t formed a cult following. Hopefully, this will change with this release.

This HD Master Approved By Director Christophe Gans is nothing short of beautiful.  The film shot on dual formats (both Digital for the Night Scenes and 35mm for the Grey Daylight Scenes) could have been a recipe for disaster.  The transfer feels apart of one cohesive whole rather than looking like it was shot on multiple formats.  This is something of a norm nowadays but as the film was shot using the same Cameras as Michael Mann’s Collateral, this could have been very problematic as the Sony Viper (the camera in question) had issues with Video Noise when ramping up the contrast levels.  It does not appear to be a problem here and the image we get here is as “filmmic” as the 35mm. One can see why this particular Master was approved by Gans as its a great representation of the film itself.

The New commentary by Cinematographer Dan Lausten is a solid technically minded commentary.  It’s a great listen to anyone that’s wanting to explore the difficulties of filming this film.

Also included on the first disc is the original theatrical trailer that runs about 2.5-minutes.

The Interview with director Christophe Gans is broken into three interviews sections.  In lieu of a commentary by the director, this is the next best thing as Gans discusses everything you would expect him to discuss the making of the film, about his theories on film, and his history in the industry.  Taken as the 72-minute whole it is one of the best interviews of the year.

A Tale Of Two Jodelles – is a new 26-minute interview with actress Jodelle Ferland.  Beginning with her life as a child actor, Ferland goes into her childhood and her mother getting her into acting at the age of 2-years-old going into commercials and moving into memories of the show Cold Squad.  The actress also discusses rather than mentors just learns from every experience and actors, and her experiences on Silent Hill, both making the film and the videogame which is the bulk of the interview.  The actress recalls a great deal for someone who was a 10-year-old at the time.

Dance Of The Pyramid – is a new 37-minute interview with dancer-turned-actor Roberto Campanella.  Beginning with his rough childhood moving to his beginnings as a dancer in Rome and then moving on from Dancing and Choreography and eventually Movement Choreography.  The interview is quite thorough on Campanella’s entire career, not just Silent Hill, stories about his early life, an Olympic Skater who offered him a chance to Choreograph, and also of course Silent Hill.

The Interview With Makeup-Effects Artist Paul Jones is actually a two-parter;

Path of Darkness: The Making Of Silent Hill – is a 6-part making-of documentary ported over from the original DVD Release of Silent Hill. There is not an aspect that isn’t covered in ORIGINS (9-minutes), CASTING (10-minutes), SET DESIGN (10-minutes), STARS AND STUNTS (8-minutes), CREATURES UNLEASHED (13-minutes), and CREATURE CHOREOGRAPHY (12-minutes). The handsomely produced making-of is given full access to the production which gives this vintage making-of a unique feel that’s more akin to what was produced for the Lord of the Rings special editions. It’s that beautifully produced. The only minor quibble is the lack of a PLAY ALL option.

On Set Vintage Featurette is a 14.5-minute EPK style making of. Much of the footage is reused for the previously discussed full-on making of.

Around the Film Vintage Featurette is a 5-minute vintage EPK B-Roll interview footage from Stars, Gans, The Producers and various crews. This featurette does show some great clips of the Video Game if one has not seen it.

Scream Factory has outdone themselves with bringing Silent Hill to home-video. With a beautiful transfer and a wealth of extras, this is a contender for Top-Ten, End of Year lists.  HIGHEST POSSIBLE RECOMMENDATION!!!!