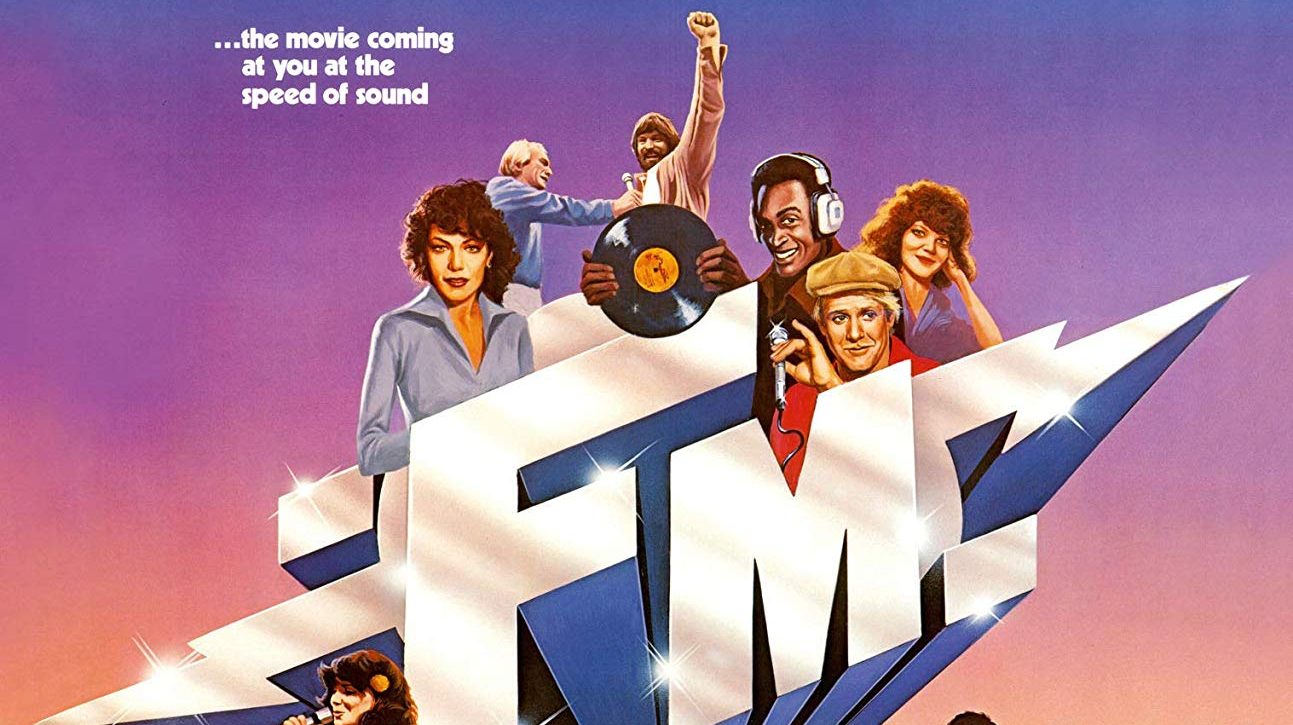 Let’s go back to 1978 a time where names like The Eagles, Linda Ronstadt, and Steely Dan were on this thing called FM Radio.  FM the Rock ‘n Roll comedy is being released by Arrow Video on Blu-Ray with a great set of extras and transfer.

FM is apart of a strange and wonderful subgenre of Radio Station set films; Border Radio, Pirate Radio, Talk Radio, Good Morning Vietnam, A Prairie Home Companion. Most of these films have very specific troupes most of them dealing with some sort of corporate interference with the freedom and liberation that these small bastions of airwave music push out to their small neck of the woods.  FM like those before it and those after adheres to that formula but is done with so much style, attitude, and wit that you can’t help but get behind it.

Station Manager Jeff Dugan (Michael Brandon) has worked his ass off to make Q-SKY the number one radio station in Los Angeles.  His group of crazed lunatic DJs like Mother (Eileen Brennan), Prince of Darkness (Cleavon Little), Eric Swan (Martin Mull) make this station an eclectic mix of music and personality.  It is only a matter of time before the executives want to cash in on the status charging sponsors and advertisers like THE ARMY a ton of money for ad space.  Dugan a holdover from the late 60s and a rebel wants nothing to do with it.  This begins a war of ideals within the radio station that ends with a strike/lockdown of the radio station.  Will the free spirit of Rock ‘n Roll prevail over corporate greed… plus a Linda Ronstadt concert that they hijack and take over.

The film definitely sticks to the formula of these types of snobs vs slobs comedies.  Ezra Sacks’ adroit script understands these troupes and formulas better than most films of this type.  The film deals in archet#1ypes, which isn’t bad but at times it feels like the dealing in archetypes are more lazy shortcuts. John Alonzo cinematographer turned director for FM definitely understands the widescreen frame and slickly shoots not only the amazing concert footage but the entire film beautifully uses that anamorphic frame better than even some genre films let alone a comedy.

The biggest asset of this film is the cast.  The aforementioned Brandon, Brennan, Little, and Mull you have Alex Karras, Cassie Yates, Norman Llyod, James Keach, and a larger cast of Musical Cameos that are too good for those Music Heads to ruin in this review.  The ensemble is a comedic force to be reckoned with.  The cast works together in a way that many of the great ensemble comedies do, that is to say, they work together to make scenes and set pieces funnier.

FM is a definite find not just for the great soundtrack (that includes some awesome needle drops from Queen, Tom Petty and the Heartbreakers, Steely Dan and of course Linda Ronstadt.  If you’re into late 70’s rock or great ensemble comedies FM will definitely be your jam.

The image is transferred from original film elements per Arrow Video but unsure of the source (if it’s an Interpositive, or the actual Negative, unfortunately)

Do not sleep on the isolated Music and Effects Track.  For a film that is about music and sound effects its wonderful to see that Arrow was as thoughtful as they were to include this very interesting track.

No Static at All, a newly filmed 25-minute interview with Michael Brandon, the star of FM. The lead actor discusses how he was cast, his experiences on the set (including the car in the opening). Brandon discusses his life at the time being a writer (he co-wrote Starman), was married Lindsey Wagner, and who his agents were (two of the biggest Agents of the 1980s).  Brandon discusses how FM effect his marriage and possibly Starman (which had become a backdoor pilot with the Million Dollar Woman), the casting, the production and just about everything you would want to (and some that you didn’t ask for), plus a great Linda Rondstandt story and Jimmy Buffett story.  A great conversation.

Radio Chaos, a newly filmed 23-minute interview with Ezra Sacks, the writer of FM.  Sacks talks about how the idea for FM came to him.  How he was hired on an FM station as their primary film critic and his experiences and how they informed on the script he eventually wrote.   How it was written and eventually picked up for production.  He does discuss in detail the making of the film with a huge amount of detail and some brutal honesty about the production and politics that went into making the film. A great interview.

The Spirit of Radio, a newly filmed 23-minute video appreciation of the era of FM radio and the FM soundtrack by the film and music critic Glenn Kenny.  Kenny discusses specifically the history of FM radio and also the music in the film.  The critic grew up in New York and discusses the freeform FM that was around when he was growing up and the corporatization of radio (e.g. Clear Channel owning 80% of radio stations).  Kenny is clearly much more of a Punk Rock fan of the era than he is of this music.  But Kenny does have an affection for the film and some of the music, specifically Daniel Fagen and his primary group Steely Dan.  He does break down each track that appears in the film with an amazing amount of detail and authority.

Rounding out the special features is a theatrical trailer and three image galleries.  The trailer that runs 3-minutes is a standard vintage trailer.  The images are divided into three galleries; Stills, Promotional Images, and Soundtracks.  These actually are can’t miss galleries for fans of this film.  The Still gallery runs 10-minutes exactly and has 60 photographs that can be skipped through or paused.  The Promotional Image gallery that consists of posters, lobby cards, and press items from the Press Kit which amounts to 3-minutes if ran automatically and 16 photographs that can be skipped through or paused.  The soundtrack gallery runs 7.5-minutes and has 45 photographs of various soundtrack covers, inserts, sleeves, et. al.