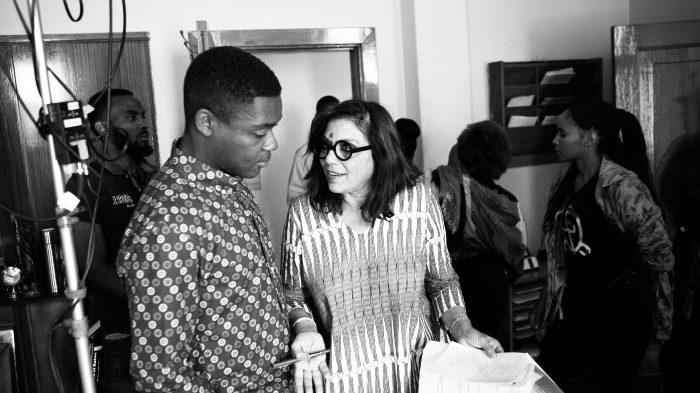 The Second Volume of Her Story continues with a look at Director Mira Nair. Kristen examines one of the directors largest and one of her most intimate.

There aren’t nearly enough women directors of color in the world, and that’s unfortunate. But the few who have been fortunate to have a career with longevity are worthy of particular praise. Such is the case with Indian director, Mira Nair. Nair is entering into her 40th year of directing, starting in 1979 with the documentary Jama Masjid Street Journal, and yet has never been nominated for an Oscar. Her films are an eclectic blend of fiction and documentary, looking at everything from Indian culture to America and England, past and present. At their heart her features are often about family transcending culture and class. This might explain why it’s easy to tell the features that are close to Nair’s heart, and the ones being captained by someone else.

Mira came to America’s attention in 1991 with the Denzel Washington-starring Mississippi Masala, but it wasn’t until 2001 that she received serious acclaim with Monsoon Wedding. Telling the story of an Indian family attempting to put on a wedding for their daughter transcended lines of culture and class. Nair took a topic that American audiences were familiar with – the wedding comedy – while infusing it with a deeply personal story about the stress that particularly comes from marrying while Indian.

After the success of Monsoon Wedding it took Nair three years to return with another feature, this one meant to test her ability to direct a film strictly for American and European audiences. She came back with a film that seemed tailor-made for success, an opulent costume drama meant to draw awards attention. For a director who cultivated a career examining a particular ethnicity, working on an adaptation of William Thackery’s Vanity Fair seemed out of left field.

In a 2004 interview with The Guardian, Nair said she identified with Thackery’s legendary heroine, Becky Sharp because of the character’s comfort as both a pauper and a woman of society. “I am the same person whether I’m at the Venice film festival or on the streets of Bombay,” Nair said. Vanity Fair follows Becky Sharp (played by Reese Witherspoon in the feature) as she navigates the ladder of high society hoping to land a rich husband. Yet even when her money disappears Sharp’s ability to charm and land on her feet always prevails.

It is this tenacity that’s attractive, both to Nair and the audience. Becky Sharp is a woman who lives by a staunch moral code and understands that the world is already against her. As a child whose father was an artist and her mother a chorus girl, the laws of pedigree have already cast her to the bottom (alike, but nowhere near the same league, as the Indian caste system). The viewer watches Becky work as a governess to a wealthy family and have to sarcastically admit her poor breeding. When Lady Crawley (Eileen Atkins) hears of Becky’s parentage she asks if her father was a “starving” artist, her favorite kind. Becky coyly responds, “Simply ravenous.”

For Nair, though her work up to this point was specific to India, she understands that class is alike all over and uses that as a gateway. Becky Sharp’s fortunes are certainly elevated because she’s a beautiful white woman, regularly propositioned with marriage, and yet her goodwill only goes so far. Lady Crawley loves Becky, until the governess reveals she’s married into the family. Class doesn’t matter until it enters into your own family, Nair posits.

There are moments that honor Nair’s heritage, but they are few and far between; treated as exotic curiosities by the characters than anything personal. Some of these elements are included in Thackery’s original text, such as one of her suitors’ travels to India. An extended Indian dance number with Sharp is beautifully filmed, but plays more like a piece of fun. A bone for Nair to express her true self and let the audience ogle WItherspoon.

Vanity Fair didn’t do well at the box office upon release in 2004 and it would be another two years before Nair would return to filmmaking, albeit with a feature literally worlds away. The Namesake hearkens back to Nair’s previous Indian-based features, starring Kal Penn as a young man attempting to grapple with his Indian-American heritage and his relationship with his father. The commonalities to Monsoon Wedding don’t just extend to the elements of heritage, but also the concept of familial legacies and the relationships between children and their parents. (This would be continued in Nair’s later features like Queen of Katwe.)

Where Vanity Fair focused on repression and gaudiness, The Namesake is personal and intimate. There’s a comfort level felt in Nair’s direction that wasn’t noticed in the cold, staid formalism of Vanity Fair. Nair is a director with a clear voice that felt hamstringed in an English costume drama. Yet it’s understandable why Nair took the project, to showcase her ability to work within American filmmaking. It’s the Catch-22 of directing: showcase your voice, but you simultaneously wonder if showcasing it will cause it to be squandered with later works.

Despite the critical acclaim of The Namesake it would result in another extended break from Nair and another attempt to work with a truly American story: the Amelia Earheart biopic, Amelia. The 2016 feature Queen of Katwe felt like another comfortable medium for Nair to work within, but since that 2016 effort she hasn’t been behind the camera since.

Mira Nair is a director with an inner vibrancy. Conflicted between the need to make movies that will be seen and her own unique background it seems hard for Nair to truly break through. Revisiting Vanity Fair and The Namesake showcase not just the dichotomy of East and West, but how filmmaking is both about personal integrity and audience appreciation.