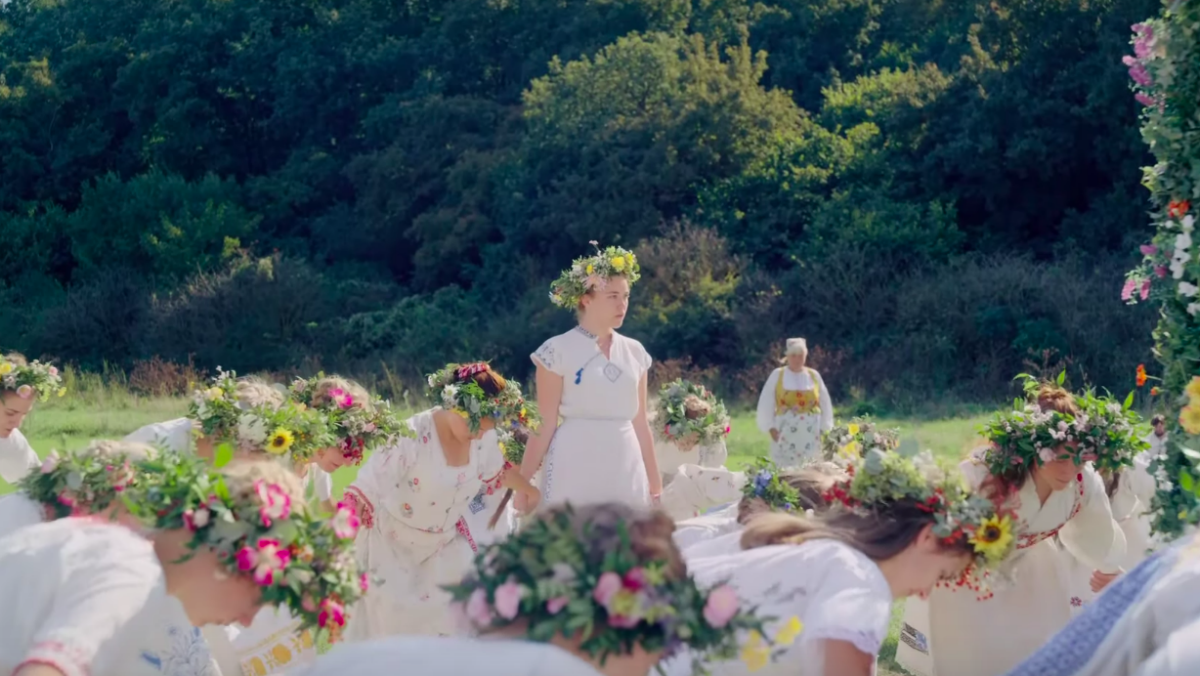 Rarely do we get a film that challenges you at every turn, boldly swiping at conventions and what we feel is genre.  Midsommar affirms what Hereditary hinted at.  That is writer/director Ari Aster’s innate ability to conjure equal amounts of anxiety and dread while still speaking of the human experience. Midsommar and its director do so in a way that recalls the renegades of the genre.

Dani (Florence Pugh) and Christian (Jack Reynor) are a couple we have all known.  She is dealing with her family and a very mentally unstable sister.  He is trying to pull away but not be a dick.  Both know they are bad for one another, on the cusp of being toxic, but neither will flinch and do what is good for one another.  A nightmarish incident brings them together for all the wrong reasons and extends out their already terrible relationship months past its expiration date.

It is during this time that Christian and his friends Mark (Will Poulter), Josh (William Jackson Harper) are planning a trip with Pelle (Vilhelm Blogren) to Sweden for his village’s Mid-Summer celebration.  None want Dani to go.  Rather than seeing Dani’s pain and suffering, Christian and the boys (they are definitely boys, children without any sort of compassion or empathy akin to 5-year-olds) see her like an albatross, one that should be ignored and pushed away rather than consoled or empathized with. That includes Christian who appears to be “put out” at every passing moment by Dani. This swirl of social issues and trigger warnings that go unheeded are what effectively places Dani in the middle of the guys’ “European Vacation”.

Pelle’s quaint commune is not all it seems.  The beauty of the land and people belie something sinister.  To what end and purpose is this looming cloud of metaphorical darkness coming?  That is the crux of Midsommar and the breakdown of Dani and Christian’s relationship as well as the friendships within the “boy’s club”.  As the relationships begin to convex, Midsommar becomes more than what it initially appears.

As a treatise on grief, relationships, masculinity, anxiety and how they comingle to create unhealthy doomed souls, Midsommar is as piercing as anything from the filmography of Ingmar Bergman.  Aster’s slow and methodical style is like a chemical skin peel.  An audience is at times frightened, fascinated and repulsed by what is happening on screen sometimes experiencing all those conflicting emotions at once.  The film is not just empty ‘shock and awe’, but like Aster’s previous work, Midsommar is weaponized for a purpose.

To what end?  Many will want to throw their theory into the ring saying they are right.  Anyone that watches Midsommar will be right about their opinions.  Aster has created a cinematic Rorschach test. This is a film that carries so much open-ended meaning that multiple interpretations of it are equally valid.  The film is about grief, toxic relationships, masculinity, and anxiety in its own singular way but one could focus on any of those and be right.  There is a Kubrickian-style distance that allows for this kind of interpretation.

As much as the film revels in the openness of interpretation, it revels in its amazing performances.  There are very few performances and performers that recall the power and depth shown by Florence Pugh as Dani.  Her work is sure to become a beacon to many when discussing mental health in cinema as Dani’s descent into a grief-stricken breakdown has to be one of the more accurate portrayals of a breakdown in recent memory.  There is no vanity in Pugh’s performance.  She is allowed to be weak, callow, angry, sad, frustrated… things that women in their 20’s are rarely allowed to do in a film.

When a female actor is allowed to do so, the film frames the portrayal in a way that it is somehow their fault or is a sign of weakness.  Aster’s script has its characters comment on this but the film is careful to never frame Dani’s plight as anything other than a harrowing experience that requires every fiber of her being to get through.  This sort of writing and direction gives Pugh the ability to push herself to the uncomfortable moments of truth knowing that she will not be the butt of a joke.  Pugh rises to occasion in the way that all great Actors do when faced with a challenging role with a director who believes and understands the way they do; she creates one of the truly great performances in recent memory.

Though we have all known our fair shares of Christian’s in our lives we have rarely seen them on screen and portrayed so acutely.  Never framed as the possible hero of the piece Christian is everything that upon reflection women and men hate in the other; he is unavailable, deceptively selfish, and presents himself as neither friend nor foe but rather a stick in the mud as to not have to make any choices.  From the opening moments, you despise Christian for his demeanor because we have either been in a relationship with him or been him in a relationship.

Reynor has been working toward this performance with a series of Stupid Fuck Ups in Film; Christian is his doctoral thesis on the matter.  A child who never grew past 2nd grade Christian makes evasiveness an art in the way he approaches both Dani and his friends.  Reynor adds the perfect dash of the “clueless victim” to Christian to give the character a verisimilitude that could cause people (both male and female) to trigger.  Christian is that someone who is in every way emotionally unavailable.

Midsommar is designed to be discussed and dissected after one watches it.  Even then the complexity and distance with which Aster approaches the last thirty minutes of the film will have people as confounded as they are delighted by what they have seen. It’s too early to assign labels to Midsommar but this much can be said; the film will linger long after 2019.  To that Midsommar is an evocative provocation that is very much a Horror movie, regardless of what anyone may tell you.

Midsommar is in theaters July 3rd