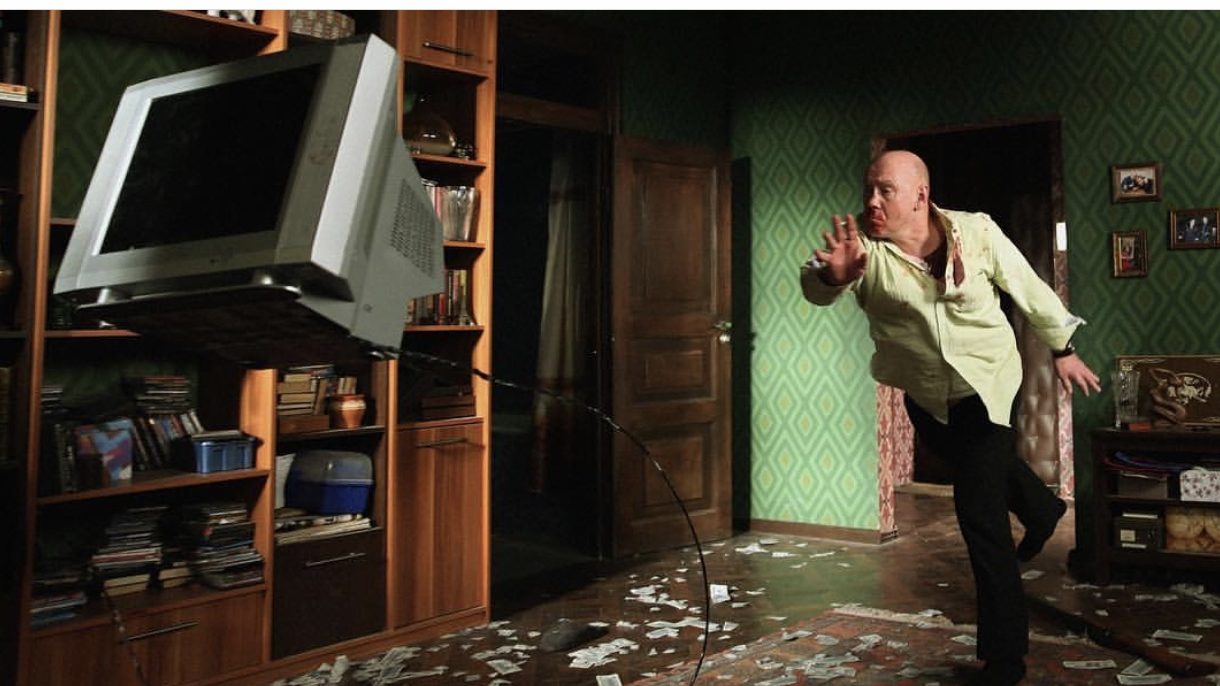 Take the visual style of Guy Ritchie’s early films (Lock, Stock and Two Smoking Barrels, Snatch) add a pinch of Danny Boyle’s Shallow Grave, throw in the blood geysers and over-the-top violence from Kill Bill-era Tarantino, put it all in a blender and the resulting cinematic milkshake would resemble Why Don’t You Just Die, the new film from writer/director Kirill Sokolov. It’s an uber-violent crime film with enough speed-ramping, freeze frames, slow motion and other editing pyrotechnics to let the audience know we’re not supposed to take the blood-soaked proceedings too seriously.

As the film opens, Matvei approaches the door of an apartment holding a claw hammer behind his back. He’s on a mission for his girlfriend. Her abusive father, Andrey, lives in the apartment. Despite the fact that Andrey is an elite member of the Russian police, Matvei intends to kill him and avenge the past mistreatment of the woman he loves. Matvei identifies himself as a friend of Andrey’s daughter, and the detective invites his would-be assassin into his home.

The two men lock eyes as they sit opposite one another and very shortly all hell breaks loose. When Andrey misses Matvei with a shotgun blast, the pellets shred a sofa cushion and send fragments of currency flying into the air. As Matvei looks at the cash confetti wafting in the breeze, he realizes that the “hit” on his girlfriend’s father may have been motivated by more than simple vengeance.

As the film careens along, Sokolov stitches together many well-established crime film tropes. The narrative is told in fragments that are assembled slightly out of order, following individual characters until their backstories collide with the incident at hand. As we follow each of the principal players through a segment based on his or her individual point-of-view, the portions of the film we’ve already seen are given a new context.

The overall theme is a crime film favorite: there’s no honor among thieves. Police corruption, missing money and blackmail are all plot elements. Double crosses and triple crosses abound. Why Don’t You Just Die subscribes to the age-old maxim that the enemy of my enemy is my friend. Alliances are formed and dispensed with from moment to moment. If you’re a stickler for “realism” in your crime or action films, Why Don’t You Just Die may not be your cup of tea.

All of that said, don’t dismiss the film as a boring retread. Why Don’t You Just Die is a blast. A film doesn’t have to break new cinematic ground to entertain. Along with the blood, torture and mayhem, the film has a delicious streak of black humor running through it. It’s a blend of dark nihilism and Scandinavian absurdism. You’ll probably wince and laugh simultaneously. And as far as this twisted film critic is concerned, that can be a fun night at the theater.