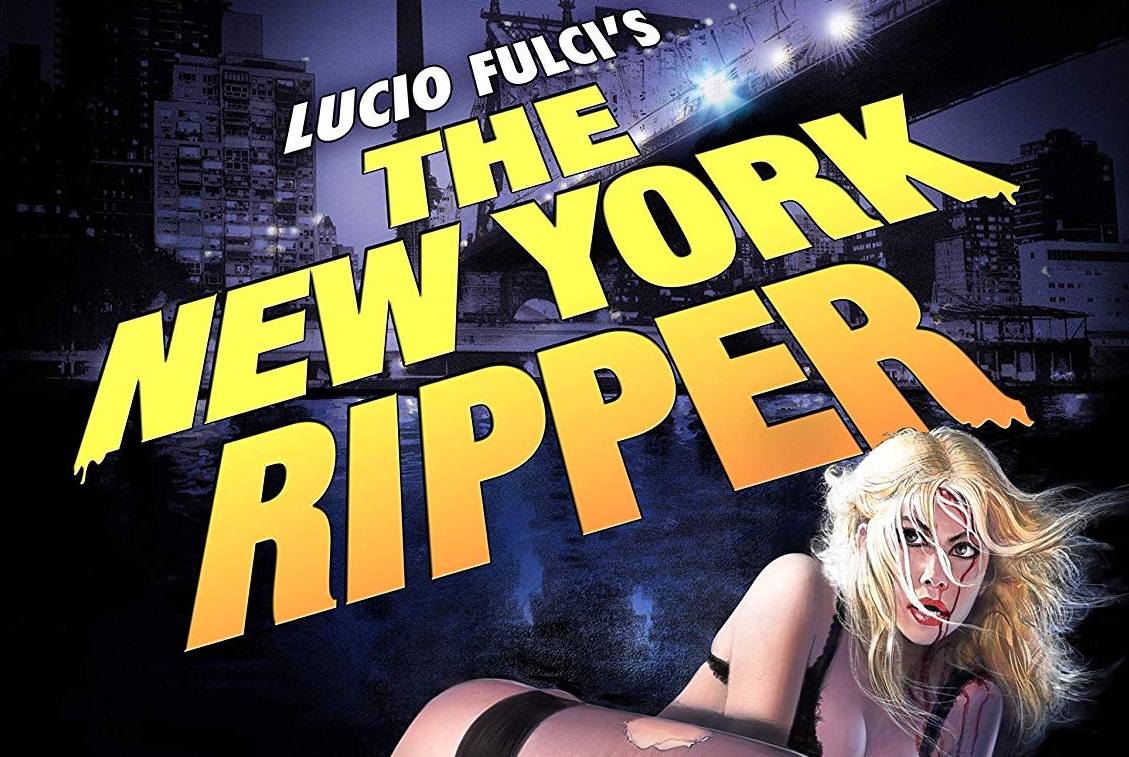 Lucio Fulci goes Full-Fulci and Adam loves every grimy, sleazy moment of The New York Ripper.  Blue Underground has gone all out with a revelatory 4K Transfer, Extra features, and a Bonus CD Score

Part of the attraction to any Fulci film is the successful mash-up of art and sleaze.  Few, if any, directors could conjure up so much sexual sleaze, gore, blood, and genuine tension in such a confounding logic-be-damned package.  In fact, that may sum up perfectly who Lucio Fulci is as a director and The New York Ripper.  Fulci’s contemporaries were never in throwing distance as to how good and skilled a director he was.  Few had the know all to throw out story-logic and still manage to create a film that has a tightly constructed plot.  It’s this contradiction in terms that makes the very best of Fulci’s films so compulsively watchable and The New York Ripper amongst them.

After a seemingly random series of murders (it’s pretty obvious what he’s doing from the get-go) have Lt. Fred Williams (Jack Hedley) clueless and left basically without anything to go on.  It’s through these murders he finds the young psychologist Dr. Paul Davis (Paolo Malco) to help him track down this serial killer.  In the battle of wills of Serial Killer vs Cop and Psychologist, this killer has the upper hand and oddly sounds like Donald Duck (how they got away with the voice the serial killer makes… ask Italian Copy Right Laws of the 1980s for that question) as he’s thought of every deranged and illogical thing that any killing entity in a Fulci film can.  The question is by its end will the cops get The New York Ripper.

The New York Ripper is artful in its sleaze and how it creates set pieces around the sexual kinks and violence it is portraying.  Many will find the level of sexuality and violence he is playing with all too much.  Point of order the film would easily garner an NC-17 if released now.  Though one would be hard pressed to find set pieces better, even in the work of someone like Brian De Palma or David Fincher.  Fulci, it’s the details and small moments that continually build and build and build… way beyond what normal films would do that truly make his films special.

Blue Underground has done it again. Like the One-Two Combo Punch of Maniac and Zombie, The New York Ripper comes to us in a perfect 4K Transfer that’s dressed to impress.  There is neither blemish nor scratch or any other issue with the restoration done here.  Impressive is the only word that one can say about the work.  Bravo, as this is no doubt going to be one of the best, if not the best transfer of 2019.

The CD included is the entire soundtrack (remastered by the way) over 30-tracks.  Anyone that loves this score is in for a treat as it’s beautifully reproduced score.  I’ve been listening to it during my writing of the review and has stayed in heavy rotation since getting it.

The new commentary by Film Critic Troy Howarth is filled with information throughout.  Howarth discusses the film’s production, inception, Fulci’s style, where this stands within Fulci’s filmography, and much more.  It’s a solid and informative commentary.

The Art Of Killing: Interview with Co-Writer Dardano Sacchetti is a new 30-minute interview with the screenwriter discussing his contributions of the script for The New York Ripper (they had the concept/story already), his time with Fulci, and some great production anecdotes.  In Italian with subtitles.

Three Fingers Of Violence: Interview with Star Howard Ross is a new 15-minute interview with the actor who discusses working with Fulci, how he was hired, and the working on the sex scenes he filmed with Alexandra Delli Colli.  In Italian with subtitles.

The Second Victim: Interview with Co-Star Cinzia de Ponti is a new 14-minute interview with actress Cinzia de Ponti who started her career in Beauty Pageants moving into acting.  De Ponti recalls her casting and working with Fulci on The New York Ripper.  In Italian with subtitles.

The Broken Bottle Murder: Interview with Co-Star Zora Kerova is a new 11-minute interview with actress Zora Kerova.  Kerova is the most iconic and gruesome of the victim deaths in The New York Ripper and the actress goes into detail about how the scene was shot and working with Fulci, who wasn’t the nicest director on set and during a very sensitive scene.  In Italian with subtitles.

”I’m an Actress!”: 2009 Interview with Co-Star Zora Kerova is a vintage interview with the actress discusses more of the fallout from starring in The New York Ripper in her native Czechoslovakia.  Fascinating interview as Kerova is brutally honest in a way most performers are.  In Italian with subtitles.

The Beauty Killer: Interview with Stephen Thrower is a new 23-minute interview with the Critic and Author of Beyond the Terror: The Films of Lucio Fulci.  The interview gives a high-level overview of Fulci’s career and where this had evolved in the Giallo film.  Thrower also goes into detail regarding the inception, production, release and everything else in-between with regards to The New York Ripper.  In this great interview, Thrower even manages to discuss the film’s misogyny or perceived misogyny in Thrower’s thesis (he gives a good counterpoint as to why the film isn’t what so many claim).

Paint Me Blood Red: Interview with Poster Artist Enzo Sciotti is a new 18-minute interview with the artist beginning with how he became a Poster Artist, the work he did for the iconic poster of The New York Ripper, and a discussion of a lot of his work for other productions.  Anyone that’s into poster art will love this interview, which one wishes could have been a bit longer.  In Italian with subtitles.

NYC Locations Then and Now is a vintage 8-minute featurette that much like Horror Hollowed Grounds shows us the locations Fulci & Co. used during the production.

Rounding out the special features is a remastered Trailer, Still and Poster Galleries.

Blue Underground’s The New York Ripper is a Top Ten Disc of the year.  Its transfer, wealth of extras and CD Soundtrack make this is a “can’t wait purchase” for Horror and Giallo Fans alike.  Highest Possible Recommendations!!!!