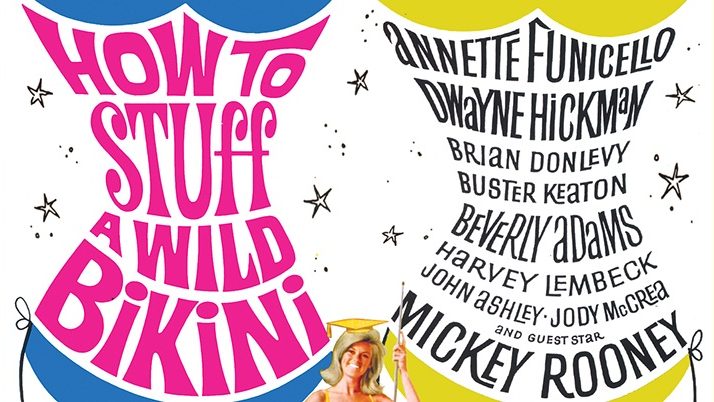 The Beach Blanket films were almost over when How to Stuff a Wild Bikini came around, proving you can only do so much with the concept.  New to Blu-Ray from Olive Films.

There’s something charming about Beach Blanket Bingo, the film that started the Frankie and Annette craze of the early 1960s.  Semi-innocent youth culture film about kids that just want to party.  After a certain point, any subgenre tests the limits of its fandom… in 1965 How to Stuff a Wild Bikini would prove to be that very film.

Frankie (Frankie Avalon in what amounts to a cameo) is now a Naval reservist doing his bid for god and country on some Tahitian island.  This includes sleeping with many of the island girls while Dee Dee (Annette Funicello) is back home.  Because of some sort of reserved guilt, Frankie is convinced that Dee Dee is cheating on him.  With the aid of one of the local Girls he’s sleeping with, Frankie finds the local Island Witch Doctor (played by the embarrassed Buster Keaton) to begin a scheme of not just spying on Dee Dee but testing her worth with ample amounts of spells and body swapping.  Dee Dee meanwhile has to contend with the unwanted flirtations of Ricky (Dewayne Hickman) along with the scheming of the local Beach Gang and Motorcycle gang.  Of course, this all ends with a Motorcycle race between the Beach Gang and Motorcycle gang all the while a besmirched Dee Dee watches on.  You can almost see the “I’m getting too old for this shit” thought bubble above her head as the end titles roll.

Adding racist caricatures, sexism, and a bunch of other lazy story troupes (even in the 1960s) does not aid the film in any way shape or form.  One feels sorry to see a legend like Buster Keaton in trite awfulness forced to play a drunken island man and say lines about “fire water”.  It isn’t just lazy it’s insulting.  The entire enterprise reeks of a cash grab.  Anything charming about the film is swallowed whole by the crassness of the script and lazy direction.  To make matters all the worse Funicello looks board and isn’t given anything to inspire her to do anything more than the minimum.

Minimum is the perfect word to describe what could have been a fun and charming wrap-up to the long-running series.  Instead, it’s confusing, confounding and all together ill-conceived.

As much as I did not like the film, the transfer Olive Films has produced is gorgeous.  Fewer things are prettier than a properly Transferred Cinemascope film from the early 1960s.  How to Stuff a Wild Bikini definitely fulfills that quotient.  The transfer faithfully reproduces the pop Technicolor color scheme and keeps the healthy amount of grain to the transfer keeping it looking like a great archival print.

Theatrical Trailer is the only item included.

How to Stuff a Wild Bikini is for fans of the Beach Party subgenre.  A gorgeous transfer waits for them to enjoy!