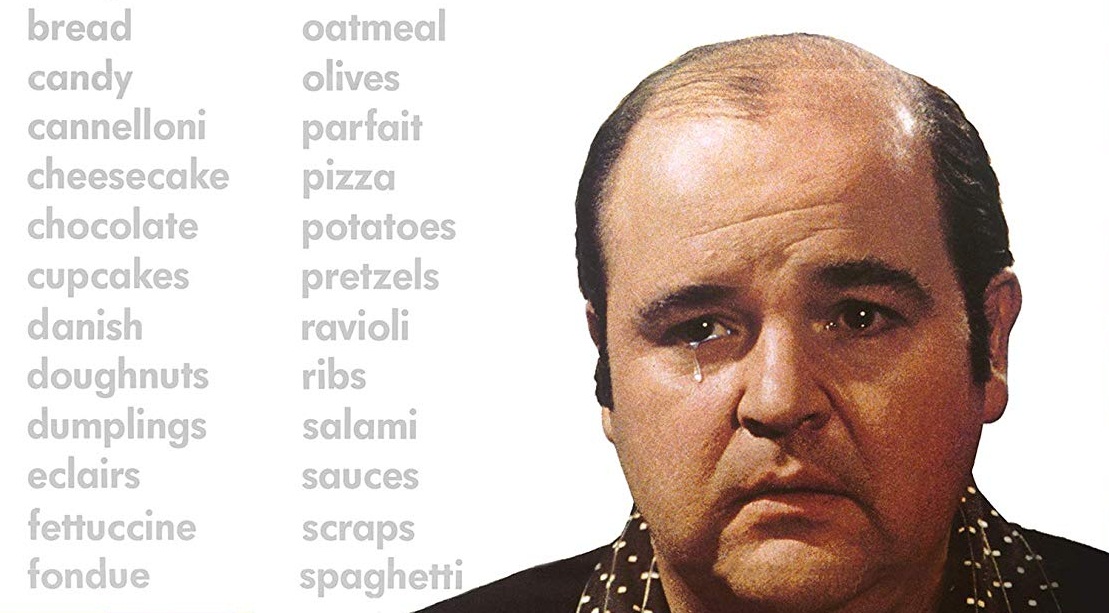 After one watches Anne Bancroft’s directorial debut, Fatso, one wonders one thing?  Why did she not direct again?  Bancroft’s film shows a director that is wonderful with actors and composition that recalls a more refined and lighter version of what John Cassavetes brought to the screen. That is humanity in all its wonderful and sometimes harsh funny brilliance.

As Dom DiNapoli (Dom Deluise) tells you in his narration, he’s always loved food.  More than anything else food has soothed him through his life. With the death of his cousin Sal, Dom is forced (re bullied) by his sister Antoinette (Bancroft) into attempting to lose weight.  Weight loss groups, Doctors, Diets all come in and out of Dom’s life.  But it’s Lydia (Candice Azzara) that shakes Dom up and possibly inspires change.

What makes Fatso so beautiful is that is it not a story of weight loss but one of understanding and acceptance of one’s self.  Bancroft’s film may be named a derogatory term but that is one of the few if only derogatory things about this sweet and heartfelt film.  Under her smart direction, the film never teeters into mean-spiritedness that many films about overweight people do.

The script (written by Bancroft) gives understanding and a voice to men/women like Dom but also shows you the frustration of their friends and families.  Bancroft as a writer never lets any character, even characters that populate the screen for less than a scene, go underwritten.  Rather Fatso is overstuffed (sorry for the pun) with wonderfully realized performance.  There isn’t a performance nor actor that isn’t great in the film.

Which leads to the heart and soul of the film; Dom Deluise. The actor rarely got leading roles but one wonders why he did not get more after Fatso.  As Dom, the actor is able to show the sensitive side that his Burt Reynolds co-starring roles never allowed him.  At center stage, Deluise is a wonderful and charismatic lead that gives the film a warmness that recalls the best work of Jimmy Stewart.  Equally good and a perfect compliment to Deluise is Candice Azzara as Lydia Dom’s love interest.  Lydia, as performed by Azzara and written by Bancroft, is such a delicate balance of a fully realized person and almost-manic-pixie-dream-girl (before that was a term).  Lydia is both someone who has been around the block but has maintained her innocence that is a perfect counterpoint to Dom’s unsure courtship.

Fatso does what no film ever does, gives a voice to people dealing with weight issues.  Bancroft at first glance, a glamorous movie star, does not seem like the right fit to deal with this topic.  She proves even the most ardent of critics wrong.  Fatso is a beautifully realized and incredibly heartfelt funny movie that gives something to its star what he rarely had during his career; a perfect star vehicle.

Fox has provided Shout Factory with a solid transfer.

Looking Back On Fatso with Producers Stuart Cornfeld and Mel Brooks is a 12-minute interview about the making of Fatso which interestingly enough started as an AFI Short film while Anne Bancroft was in a Women Directors Program. It was the first official film for BROOKSFLIMS. The two producers discuss with some great details of how Bancroft passionately directed this film. Those that love Brooks and know just how much he loved his wife be warned there is a moment at the end of the featurette that Brooks praise leads to a highly emotional moment.

Interview with Film Historian Maya Montañez Smukler is a 26-minute discussion of not just Bancroft as a director and Fatso but a discussion of the history of Female Directors and loss of Female directors in the 1930s. Smulker gives a great detailed account of the history of female directors. As much a visual essay as it is an interview. One wishes this interview was double or triple its length as there is so much that the Film Historian discusses.

Rounding out the special features is an Image Gallery and the Press Kit. The Image Gallery runs automatically for 2-minutes through 30 stills of Lobby Cards and Posters. The Press Kit run for 3-minutes, can be paused on each of the individual pages of the 40-page Document.

Fatso is a legitimately amazing discovery for 2019.  Shout Factory has done it justice by including some great special features.  HIGHEST POSSIBLE RECOMMENDATIONS!!!!!

Shout Factory’s Blu-Ray Edition of Fatso is out June 25th!