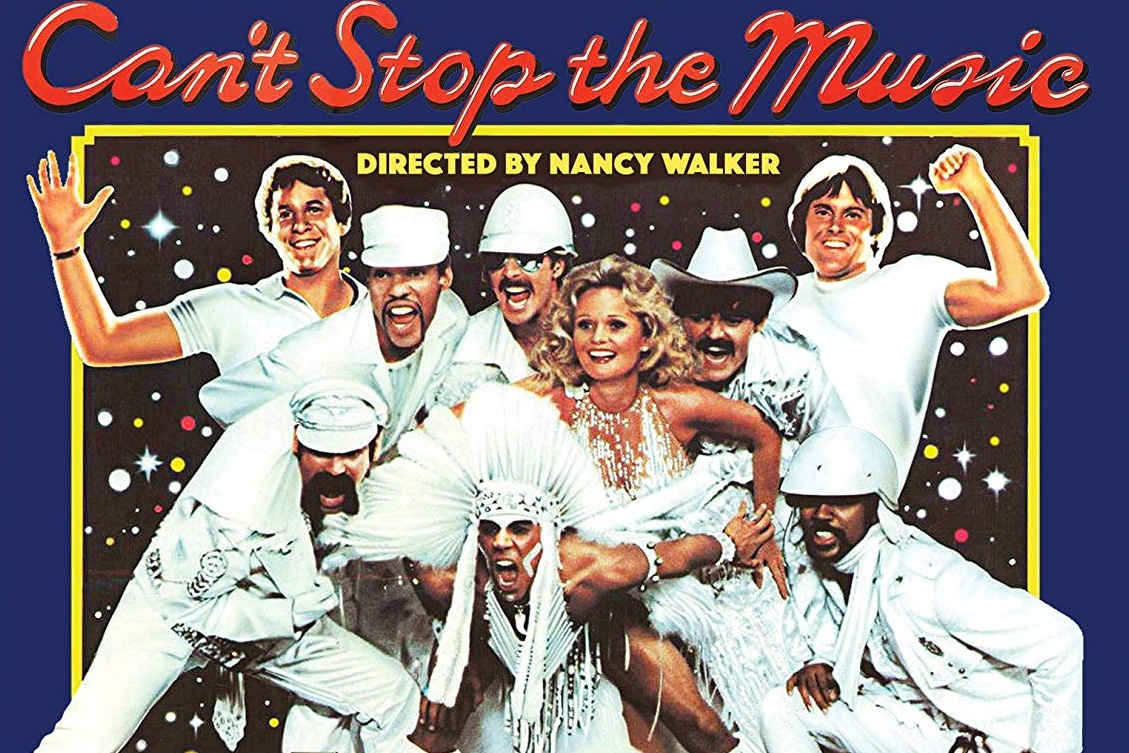 Adam delights in the high camp that is the Can’t Stop the Music, the fictionalized story of the Village People and their “Producer” plus Bruce Jenner.  Shout Factory is releasing this notoriously difficult to watch film on Blu-Ray loaded with special features and a new 4K Transfer.

The 2019 Met Gala’s theme was “Camp”… which one has to only look up what stars wore to get a glimpse that many had no idea what exactly Camp was/is.  I mention this because Can’t Stop the Music may be the biggest piece of high Camp this Film Critic has seen.  This is not meant as any sort of insult, rather the boldest and best-est of compliments to this magical musical that is guaranteed to make as many smile as it will enrage others.

Can’t Stop the Music tells the fictionalized story of how the Village People were formed and for a very-very-very-very, short time became a worldwide sensation.  Jack Morell (Steve “The Goot” Guttenberg) is a happy-go-lucky wannabe Music Producer that’s just quick his job to DJ at a local disco and playing his music. Playing his “Club Banger” called Sam proves to him that he needs to form a group to follow his dreams to fame and fortune.  On this road Morell is helped by his Retired Model Friend Sam (Valerie Perrine), Felipe Rose (aka the man who would eventually become The Indian) and a Lawyer (played by Bruce Jenner nee Caitlin Jenner) informing the X-Men of Disco Music; VILLAGE PEOPLE!

There isn’t any way to prepare you for the glitter-infused awesomeness of this musical confection.  The film is extra-extra-on-Spinal-Tap’s-11 from the opening moments to the final dance number finale.  One needs to only watch the uncensored version of YMCA to understand the kind of film you’re watching.  The amount of split screen, greased men performing various gymnastic stunts, penis, mustaches, and choreographed suggestive dance numbers that fill this 5-minute set piece is enough to fill four or five movies in 2019.

This is one of the rarest of rare films; one that cannot be truly critiqued or reviewed in the traditional sense.  The film stands as a document to the excess and cocaine-fueled dreams of the 1970s and the height of the disco era.  Now, if this was something released by say… The Bee Gee’s we could critique it for all its crass money grab (see: Sgt. Pepper’s Lonely Hearts Club Band). Can’t Stop the Music is NOT that and though some of the cash-grab intent is there, with how much Producer Allan Carr, director Nancy Walker, and the Village People did get away with this film.  This is what Camp is the excessiveness and over-exaggeration to the point of almost self-parody.  But within that camp Can’t Stop the Music is able to get away with so much that even now in our more supposed liberated times would not be able to be done.  There has to be a “hat’s off” moment of gratitude at how through excessive and coke-addled thought process they have created one of the most liberated gay films of an era but one that hardly anyone has seen.

There is no verisimilitude to anything that happens in during the 123-minute run time.  But that isn’t the point.  Can’t Stop the Music a victory lap for the Village People and everything they stand for (including crass commercialism for forming a “formula band”). What makes it a great film is the sort of fantasia of a New York created in the film.  This is a wonderful dream of a New York that is as much a dream world as Amelie’s Paris.

Shout Factory (along with CanalPlus who provided the transfer) has done justice to this bright and bold film.  With Optical Splits, lots of optical flares, deep reds, and neon-drenched photography this transfer could have been a nightmare.  Luckily, for us, the 4K transfer handles everything perfectly.  There definitely generation loss with the different optical splits but that is not the fault of the transfer as much the work in the 70s with Optical Printers.  Everything else is spot on perfect from the grain structure, contrast, sharpness and color reproduction being perfectly rendered on the Transfer.  Bravo, to Shout and CanalPlus for taking the time and effort to make this transfer truly pop.

The Audio Commentary featuring Allan Carr, Jeffrey Schwarz, Bruce Vilanch is almost as much fun as the film itself.  The commentary is one long entertaining bit as Carr, Schwarz, and Vilanch discuss the film, the times, the culture and just about everything you could want.  If you loved the film you’re going to extra-extra this Commentary.

“A Wink, A Wiggle, and A Weave” is a new 25-minute interview with Randy Jones. Discusses his childhood, his college years at UNC, moving to NYC, getting involved in the dance/model scene with the likes of Grace Jones, Iman, and the like. This interview is more a career retrospective

“Can’t stop the Cowboy “ is another new 41-minute interview with Randy Jones. He begins with a story of how Can’t stop the Music was the First Golden Raspberry for the Worst film of 1980 (it really wasn’t). This is more of a making-of interview and how the Village People got involved with the film. This interview is better to be watched as there are so many great anecdotes about how this came to be and stories from the production, one tidbit is that Jacqueline Bisset was almost cast as Samantha (the role that eventually went to Valerie Perrine).

Theatrical Trailer is an oversold 3-minute Trailer. The trailer is great for reference for just how bad the quality of the VHS versions which was what this film was available.

TV Spots amount to two 30-second spots trying to sell the film hard on producer Allan Carr who was a household name at the time because of the gigantic hit that was Grease.

Can’t Stop the Music is a Camp-Classic that needs to be experienced.  You will never see anything like this and thank you Shout Factory for putting the biggest rainbow colored bow atop the package.  HIGHEST POSSIBLE RECOMMENDATION!!!