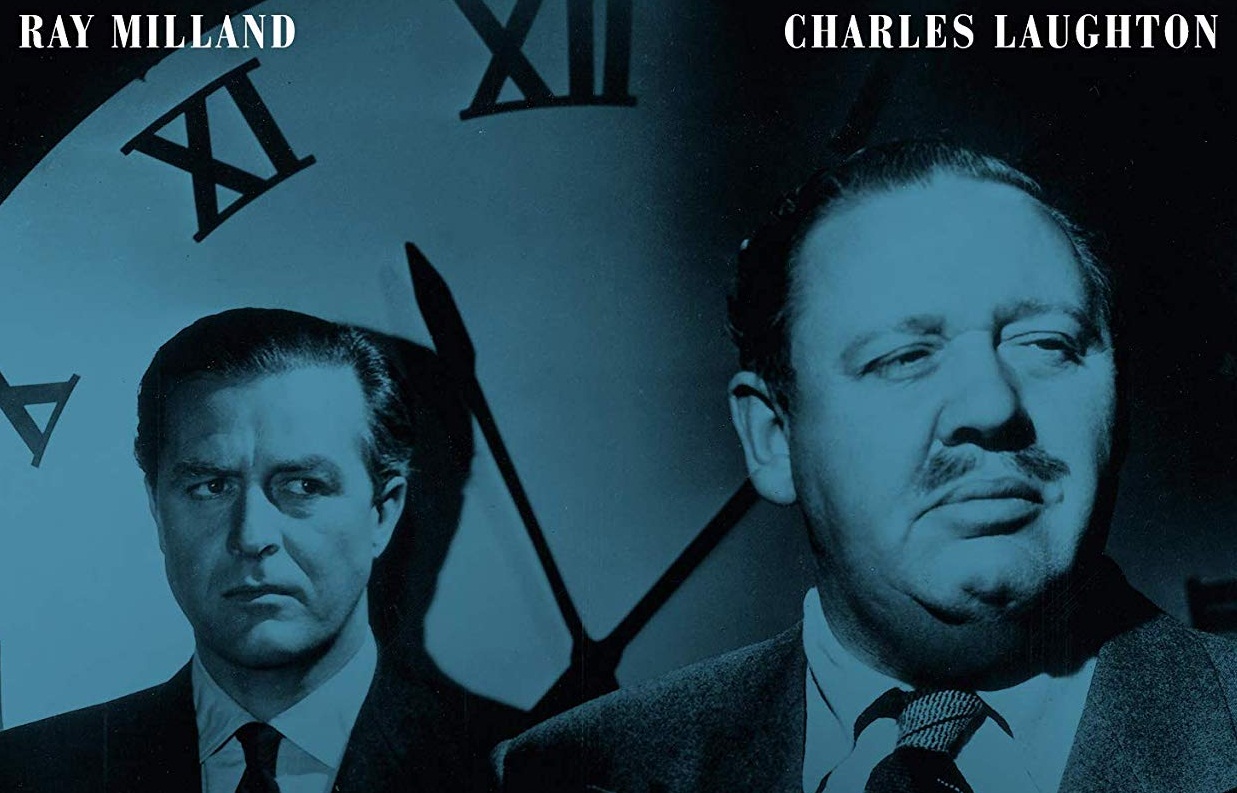 Adam is breathless as he finishes the taunt Noir Thriller The Big Clock.  Arrow Video has released the film on Blu-Ray with a host of extras

Lack of money is the mother of creativity or something like that is the saying.  This statement is distilled perfectly in John Farrow’s The Big Clock.  Armed with a snappy script, Ray Milland and Charles Laughton Farrow literally invented the “ticking clock thriller” with this adaptation of the Kenneth Fearing Novel.

George Stroud (Milland), the Editor-in-Chief of a crime magazine is frustrated by his boss Earl Janoth (Laughton) constant bullying and tyranny.  On the eve of a long needed and promised vacation that is crashed and burned Stroud meets the gaze of Janoth’s mistress Pauline York (Rita Johnson).  After a night of drinking and some strange adventures, York proposals of blackmailing his boss and sleeping together do not go over well for any in this triangle.  Janoth brutally murders York in a jealous rage as he sees a man (he does not know its Stroud) leaving her apartment.  This begins a topsy-turvy nervy game of Noir-ish game of cat-and-mouse as Stroud is not only tasked to find the killer but also cover his tracks to elude from being a suspect.

The film is a tightly constructed piece of Noir that is written, directed, and acted within an inch of its life.  The film is lean and moves quickly by design.  At 95-minutes every piece of narrative and character work is a piece to this puzzle.  Director John Farrow and Screenwriter Jonathan Latimer (adapting Kenneth Fearing’s novel) understand that every piece of this puzzle needs to fit onto the next for the story to work.

Milland and Laughton as unknown adversaries are brilliant because they too understand that the narrative in this film is far more important than their performances but also conform to the story’s needs.  Laughton is outright brilliant as the egomaniacal-sociopathic Owner of the Magazine.  The arrogance that he imbues Janoth will be familiar to anyone who’s met the specific type of (B)(M)illionare.

The Big Clock is the case study for a Ticking-Clock Narrative.

This new transfer from the original film elements is fantastic.  The black & white photography shines as the image is crisp and for the most part free of blemishes.  There are a few of note but most of the tiny scratches and pops are during the Optical Transitions, which is normal in any older film.  Barring them doing a wet gate of the negative (which is much too costly) this is as primed as a transfer gets.  Bravo to Arrow for consistently going the extra mile on these transfers.

Turning Back the Clock is a 23-minute appreciation of the film by critic Adrian Wooten. Wooten breaks down the history of the project including a bit of history of the author and novel.

A Difficult Actor is a 17-minute interview with Actor/Historian/Producer with Simon Callow on Charles Laughton.  Much like Callow’s knowledge of Orson Welles, Callow has a great wealth of information about Laughton.  The interview is entertaining and informative in the way that Callow and his spry sense of humor can be, an utter delight.

The Big Clock by the Lux Radio Theatre is a 60-minute radio play with Ray Milland reprising his role from the film.  The radio play is set to Stills from the film that matches the scene that is playing out.  Anyone that’s a fan of the Super 8mm presentations Arrow or Indicator has done in the past will be delighted to listen/watch this alternate version.

Rounding out the special features is a Trailer and Two Image Galleries.

Arrow delivers the needed punch for The Big Clock.  Recommended!!!