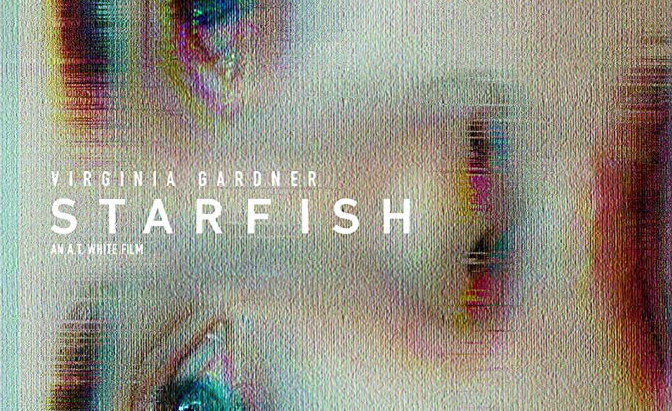 The feature debut of filmmaker and musician A.T. White, Starfishis a very different take on guilt and grief, wrapped in something a little out of the ordinary.

Now that streaming video is a way of life, many films get released and go straight under the radar, slipping into the listings on digital streaming sites without much fanfare. This is particularly the case for small, independent films which are difficult to categorise due to their unusual content or experimental nature.

I’m willing to bet that Starfish fits this category and that it has gone largely unnoticed since its release last week.

Written, directed and with an exceptional atmospheric score by British filmmaker A.T. White, Starfish follows Aubrey (Virginia Gardner), a young woman who is grieving the death of her closest friend and who encounters some strange events, possibly linked to her friend’s death. As she tries to unlock the mystery which her friend has left for her to solve, things start to get weird. Is something really terrible happening, or is her mind playing tricks on her?

This synopsis, however, makes Starfish sound a lot more straightforward than it actually is. While it’s unfair to compare it to other films, the atmosphere variously invokes movies such as von Trier’s Melancholia, Gareth Edwards’ Monsters, Upstream Colour (Shane Carruth) and even Donnie Darko. If these mean something to you then you’ll get the idea, without having to divulge any of the plot. There are a couple of jump scares which won’t worry those more used to that kind of thing than I am, but it’s more psychological science fiction mystery than horror.

The whole film is actually held together by a strong performance from Virginia Gardner, who has long stretches of screen time alone and does a great job of acting against a disembodied voice and/or a small turtle. No spoilers.

Beautifully shot and with a couple of interesting visual choices along the way, Starfishwill pique the interest of those who enjoy films which are a little different and who don’t necessarily need them to make complete sense. It’s a different take on guilt and grief, wrapped in something a little out of the ordinary.

Starfish is currently available now on VOD/digital in the US, UK, AUS, NZ, Canada.