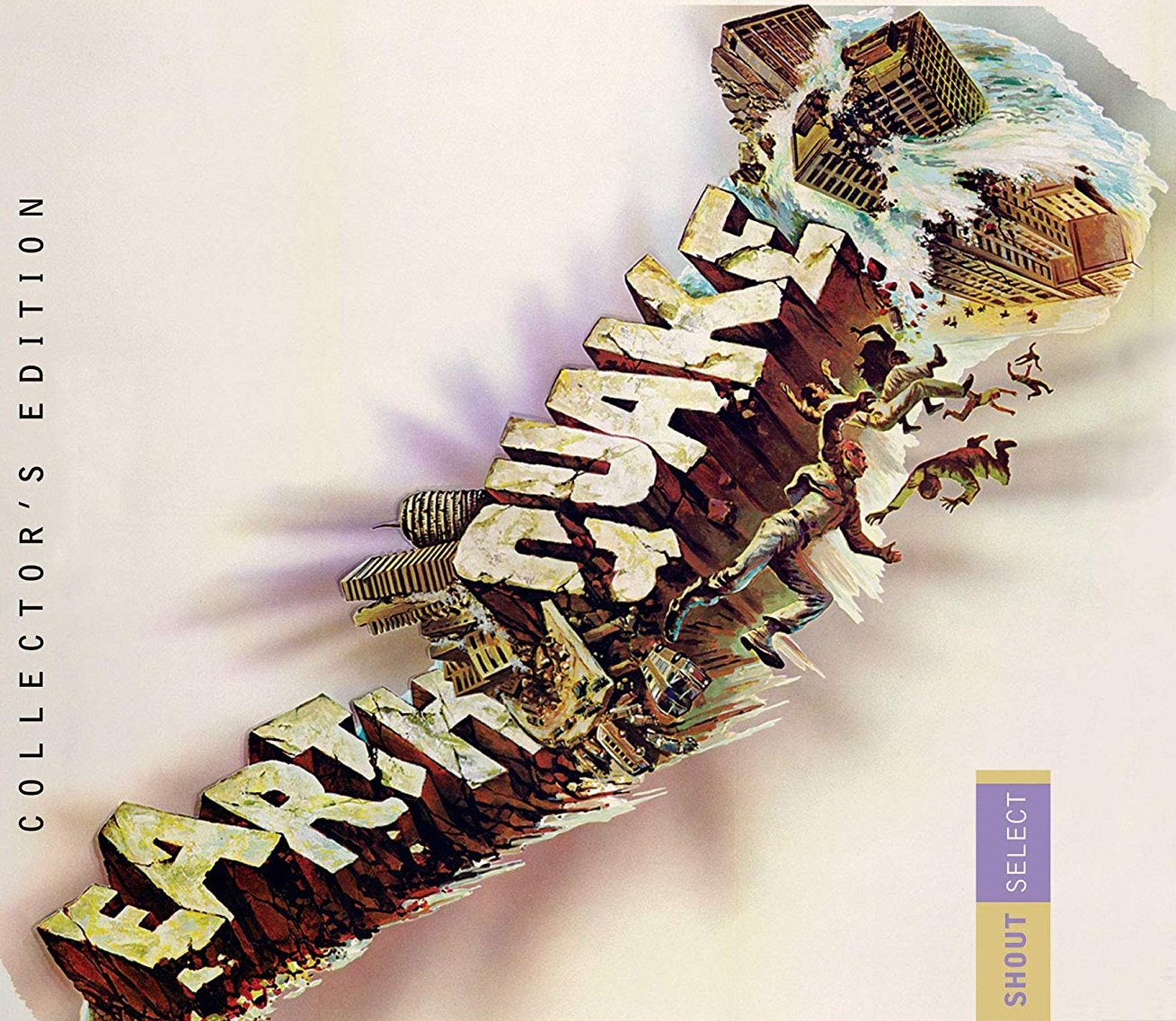 Adam buckles up for a bumpy ride with Charlton Heston, George Kennedy, Richard Roundtree, Ava Gardener and a host of others in EARTHQUAKE presented in SENSURROUND no less. Shout Factory has released a massive special edition Two-Disc Blu-Ray of the ‘70s era blockbuster.

For a film that from greenlight to release was less than 9-months EARTHQUAKE starring Charlton Heston works like no one’s business.  EARTHQUAKE is nowhere near the worst entry in the ‘70s era disaster film far from it.  With an All-Star Cast (as was in vogue at the time for these entries), state-of-the-art Sound and Stunt Work, and a consistently serious tone makes for a good old fashioned time at the movies.

No different than any other Disaster picture; EARTHQUAKE is a collection of micro-plots that play out over the course of the film.  Heston’s Stewart Graff is in the midst of a huge construction deal and an affair with a younger widow Denise (Geneviéve Bujold).  Remy (Ava Gardner) is desperately attempting to keep Stewart her husband with fake suicide attempts, verbal abuse, and discussions with her father who also happened to be Stewart’s boss (played by Lorene Greene).  Police officer Lou Slade (George Kennedy) is on suspension for hitting a fellow cop after running down a suspect in Bel Air.  Miles Quade (Richard Roundtree) is an Evil Knievel style stunt man trying to get his big break.  A creepy creeper Army Reservist Jody (Marjoe Gortner) is being picked on by a group of guys and creeping on Rosa (Victoria Principal).  All these and other citizens and stories set in Los Angeles literally come to a head when the titled event happens.  How these people react, die, and/or survive is the drama of EARTHQUAKE!

Director Mark Robson find the balance of character development, broad comedy, and harrowing action set pieces that make the 121-minute run time goes like a breeze.  EARTHQUAKE play’s with human drama more inherent within the disaster pre-and-post-event rather than the razzle-dazzle of the FX work that plays out during the big event.  Robson is concerned with ensuring that story to story the film feels a part of a cognitive whole rather than the big set pieces and how cool they are.  In fact, much of the action as directed is more like a horror film or some harrowing adventure film where the stakes are human lives rather than the expense of them.

The actors are all here and have come to play in a very serious way.  The best of the best is George Kennedy as Police Office Lou Slade.  Kennedy plays Slade like the lovable blue-collar moral center that he is.  Only a co-lead in the film Kennedy steals it from everyone he works with including Heston.  Both he and Heston seem to play out some sort of sweaty-hairy-machismo game of one-ups-manship that the film is better for.  Heston here is in full-on agonized action lead here.  The moral quandary that his story allows Heston to beat his chest in the emotional turmoil of a man trying to save his… two… lady… loves… from… Both Gardner and Bujold, unfortunately, are stuck with “damsels in distress” roles even when the film gives them more straightforward actions to do.  Marjoe Gortner as Jody Joad (great name) the paint-by-numbers psychotic army reservist brings a sort of TV movie lunacy to the role that makes one chuckle more than being frightened by.  Actors like Lorene Green, Richard Roundtree, Victoria Principal, and Pedro Armendáriz do solid work but are only given brief screen time as compared to Heston and Kennedy.

EARTHQUAKE is solid big-budget entertainment.  The kind that we do not get any more, filled with human drama and story before and after the big FX-driven set pieces are done with.  That human drama and the performances by Heston and Kennedy make this great action event filmmaking.

Extra padding.  The additional 22-minutes will not convince anyone that this is a better film.  These additional character moments and plot lines only serve to literally buffer out the time for the NBC Two Night Television Event.  That said, those that love the film will find these additional scenes and plotline fascinating and well worth watching.  Some may prefer to watch the TV Version (similar to people’s feelings on the recent Warner Archive release of The Superman: The Movie Extended Cut) and its amazing that it is included but the preferred version will definitely be the Theatrical Cut.

Though for anyone that picks up this package this is definitely worth a watch or three as it really gives one the ability to see the differences in cutting styles and approaches.  Both films feel similar but not so similar they feel like the exact same entry.  The TV Version definitely feels like a leisurely paced film and not the more urgent tone the theatrical has (which itself is a bit slower by today’s standards).  Again, all well worth a few watches especially for those interesting in the power of editing and interested in the way that the business of selling a film Post-Theatrical Run worked.

Side note; one wishes that Shout Factory had found someone or multiple someones to do either a featurette on these TV Versions or a Commentary on both films discussing the differences and histories of the Extended TV Version of various films.

We almost never discuss the audio component of the films we’re reviewing but as the SENSURROUND was such a big selling point of this film is must be discussed.  First and foremost a huge thanks to Universal and Shout for including the original 2.1 Sensurround track with the disc.  That being said holy crap!  This track is the preferred track to watch the film with.  Now, only if you have a great sub and great speakers that can handle that low end.  The track is a lot of fun and will give your system a workout.

The collection not only houses a new 2K Scan of the Interpositive of the Theatrical Cut (2.35:1) but also a new 2K Scan Reconstruction of the TV version, Featuring over 20 Minutes of Made-For-Broadcast Footage (Presented In 1.33:1).  This is amazing.  Similar to the work done on the TV version of Halloween, the second disc has the TV version.  Of course, the Theatrical Cut’s transfer is the better of the two but the TV Version is still surprisingly astute of a transfer.  The images look to be perfectly balanced between image sharpness and grain structure.  The Theatrical transfer has no hints of DNR or any of the telecine tricks that take away from the 35mm Image in all of its perfect (imperfect) image.

DISC ONE: Theatrical Cut Of The Film

Note the TV version; featuring over 20 Minutes of Made-For-Broadcast Footage (Presented In 1.33:1)

Note, as a whole, this two-disc set was designed to impress and give you an overall feel of what it was like to make a big budget event film circa 1974. The discussion in each special feature is designed from a historical point of view.  Though the FX work is dated, the featurettes are fascinating glimpses into art that through dying or dead is still an art that should be preserved.

Rounding out the special features on disc one are a Theatrical Trailer, TV spots, Radio Spots, and a Still Gallery.  Do not sit on these special features.  The trailer and spots are classic prime advertisements that really should be watched as their quite good fun.  It also gives one a glimpse at how films were marketed not all that different from the way that films are marketed now.

The Still Galleries are divided into Five sections; Production, Behind the Scenes, Matte Paintings and FX, Deleted Scenes, and Posters and Advertisements.

Sounds Of Disaster: Ben Burtt Talks About SENSURROUND is an 11-minute new featurette with Sound Master Supreme Ben Burtt who was a USC Film student at the time when the film was released. Burtt discusses how they as students would watch the film because of the technology involved with the film. Burtt discusses the Sensurround origins and it’s quality and how it had no real range in its fidelity. Universal and Cerwin Vega (speaker company) created the low-frequency sound system. This is by far the most technical of the new featurettes.

Scoring Disaster: The Music Of EARTHQUAKE is a 16-minute newly recorded featurette discussing John Williams’ score for the film. This is a deep dive discussion into John Williams career beginnings, the composer’s theory and how he approached scoring the film, the film landscape as Williams scored the film, and how the sensurround component affected the way and what Williams scored the film. It’s filled with fun factoids he gives out like Universal has a scoring stage, it took only two days to score the film (it’s usually about 5 to 7 days to compose a big score), and Williams composes every single musical queue (including the incidental music). A great technical walkthrough of the film’s score.

Painting Disaster: The Matte Art Of Albert Whitlock is a 10-minute featurette about the work of matte painter Albert Whitlock.  Those familiar with the pages of Cinemafastique, and Starlog will be quite familiar with Whitlock’s work (The Thing, Dune, Star Trek: The Original Series and many Hitchcock films).  The discussion is done with cinematographer Bill Taylor who discusses the technical aspects that Whitlock took to make those great paintings. Taylor discusses the tight time frame (9 months from green light to release) thanks in large part to all the technical FX departments in-house and Technicolor also in-house. Taylor discusses how the director Mark Robson, production designer Alexander Golitzen, and Whitlock worked together in detail because just how many shots his painting was used in. They also discuss how the actual matte process is down by examples.

The Additional TV Scenes are just that the 22 minutes of additional scenes that were filmed specifically for the NBC Two Night event.  The disc gives you the option to play them without watching the Television Version.  The TV scenes amount to 24-minutes beginning with the commentary at the beginning of the film with a narration about the San Andreas fault line. The major storyline included is a Plane flight held over the skies of LA after the earthquake. Other scenes are odds and ends fleshing out what has already been fleshed out.

Additional TV Scenes are just that, even more, scenes filmed for the TV version, but these were never shown.  Shout Factory has warned that these were taken from the best available film element.  It definitely shows the years have not been kind to anything that was not finished on Film THEN shown on TV.  The Additional scenes amount to two scenes that were cut by Shout because they could not find good enough elements for the Transfer. The first is a 7-minute scene involving the group of guys who terrorize the Jody, the army reservists, going into a pawn shop where they find more than they bargained for. The second is the famous air flight take off (running about 2-minutes).

Wow, Shout Factory has definitely outdone themselves with the work that they have produced for EARTHQUAKE. Two Versions of the film, the original SENSURROUND track, multiple featurettes on the making of the film… this is Top Ten quality of the year Disc.  HIGHEST POSSIBLE RECOMMENDATIONS!!!

Shout Factory’s Blu-Ray Edition of EARTHQUAKE is out now