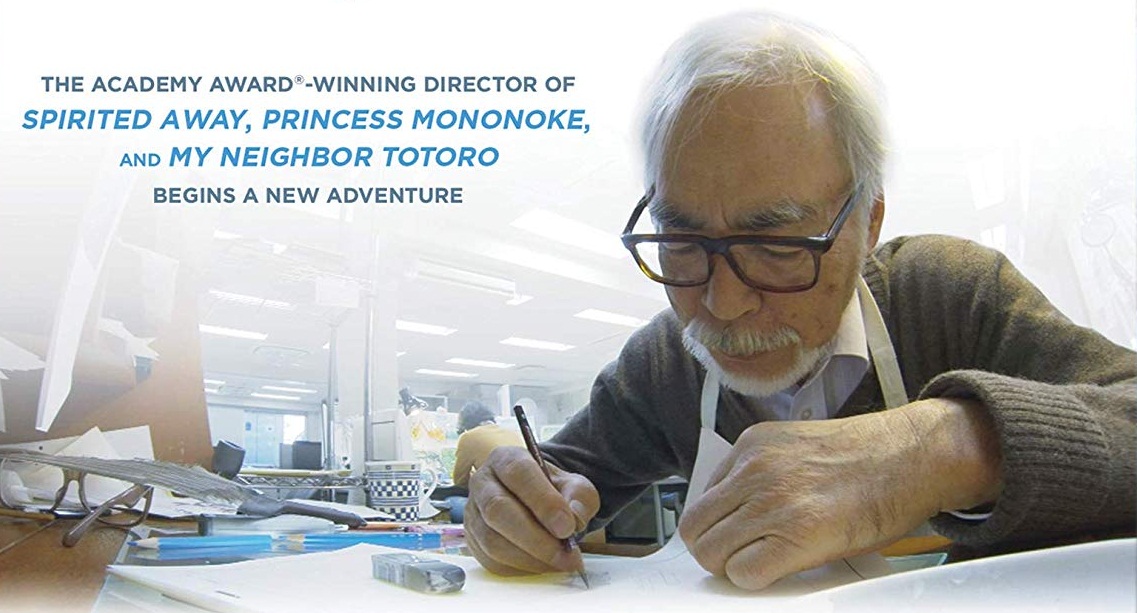 We dive into the fascinating mind of Master of Cinema Hayao Miyazaki like his Films is a wonderfully filled with Complexities. Shout Factory’s GKIDs brings great The Never-Ending Man: Hayao Miyazaki to Blu-Ray.

A pragmatic look at one of the few cinematic Geniuses working today; Hayao Miyazaki. The Never-Ending Man is a documentary as much about the Director as it is a meditation on growing old and what it means to “retire”.

At a brief 72-minutes, The Never-Ending Man is both ponderous and acutely aware of its purpose. Much like the best work of its subject, famed Animation Director Hayao Miyazaki, the film is direct and indirect in the way it approaches its subject. Starting without any regard for space the film thrusts us into the world of Miyazaki as he begins his retirement in full. This retirement includes working on a short film Boro the Caterpillar. Boro is Miyazaki’s first full foray into CGI. The director is trepidatious about the new tool, of which he had used sparsely starting with Princess Mononoke, which he states as much. As the small crew begins to work with the director, we begin to see a man who lives in frustration. Frustration with the world, frustration with animators and creatives, Frustrated with time and most of frustrated with age. From those frustrations begin a new era for Miyazaki that new era of “Star Wars” and CGI that cannot do what he imagines in his mind. A new era that may mean the end of Miyazaki as a director in any form.

What stands out most about the documentary is how much access Karu Arakawa was given. What begins as Miyazaki ignoring the camera slowly becomes a confessional for the man. Arakawa smartly alternates between the director grumpily beginning to work on Boro and fixing various meals for himself at the apartment he keeps close to Studio Ghibli. It’s in these moments we catch Miyazaki unguarded often quietly speaking thoughts aloud. The director often speaks of his own nature as a creative and what this self-imposed retirement means. These moments are as complex and fascinating as the films he has directed.

The Never-Ending Man much like Bergman Island before it shows a man in the twilight of his life and career refusing to let that stifle him. Like that other documentary, The Never-Ending Man shows an older creative both unwilling to talk about himself and willing to be open and critical about himself as a creative. If anyone were slightly curious about Hayao Miyazaki, this is a film to see. It both reaffirms what is known and glimpses at things we don’t.

The film’s documentary style footage is shot on Digital Video (not an Arri Alexa or RED but what looks like a Consumer Grade Camera).  The transfer is as sharp as you would expect from the sourced materials they had to work with.  It looks as good as one would expect.

The alternate Version though it includes some new footage is only a special feature for a reason.  The cutting down the film by almost 25 minutes and the English voiceover takes the entire intent out of the documentary and takes the original from something truly special and unique to what would be an Extra feature in a Box Set. A fascinating curiosity but stick with the original version before even considering taking a look at this one.

The Never-Ending Man: Hayao Miyazaki is the real deal.  A truly wonderful meditation of what it is to be creative in your twilight years.  HIGHEST POSSIBLE RECOMMENDATIONS!!!!