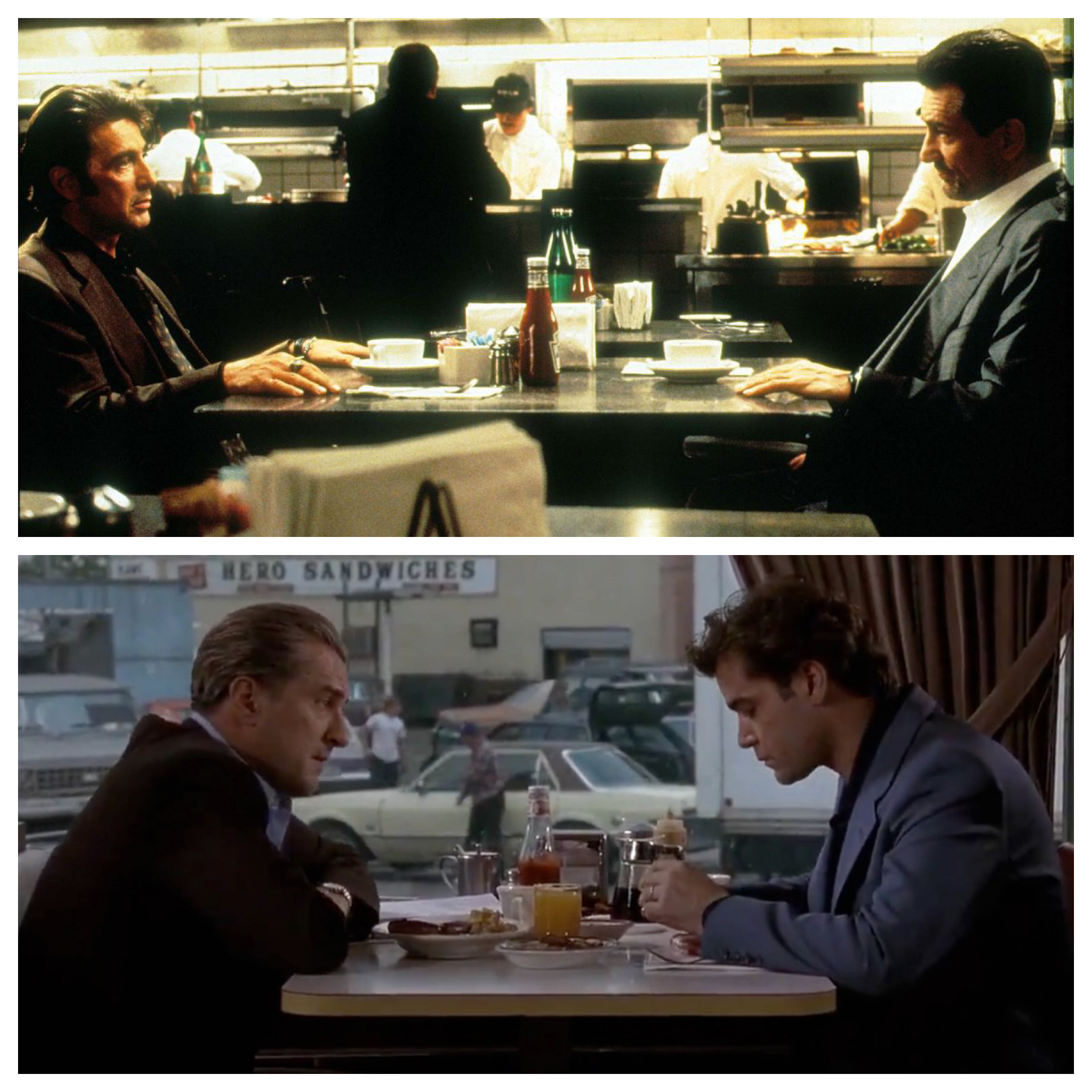 Scott and Adam match wits as they face off on the topic of which much-lauded 90’s crime film is better:  Martin Scorsese’s Goodfellas or Michael Mann’s Heat.

Imagine if you will, Scott and Adam have met at (the now closed) Kate Mantilini’s in Los Angeles.  This is the first time they’ve been face-to-face.  One a criminal.  One a cop.  Both professionals at the top of their respective games.  Each one sniffing the other out.

Now, also imagine, Scott and Adam at the Copa’. They’ve just passed Nicky “No Nose” and Frankie “Two Times”.  They’re low-level hoods.  One full Italian.  One half Irish, half Italian. They’re seated at their made-to-order booth waiting for Frankie Valli to perform.

What do these guys talk about?  Obviously, the seminal works of two great directors:  Heat (by Michael Mann) and Goodfellas (by Martin Scorsese).  Adam fires the first shot:

ADAM: This all started with a text from me, asking you about your favorite action films of the 1990’s.  You gave me your top three. I gave you my top three which included Heat.  You felt that Heat was in a classification of its own, leaning more toward crime than “action”.  I agreed with you and feel it’s the best crime film of the 1990’s.  This caused a bit of a stir in you as you immediately countered with (to paraphrase) “oh contraire, Mon Frere… Goodfellas would hold that particular crown.” Thus, this conversation began.  So, with that, I’d love to hear you wax philosophical for a bit about why Goodfellas gets that crown in your estimation?

SCOTT: I’ll start with a disclaimer for our readers that is already well known to you: I’m a HUGE fan of Michael Mann.  Heat is one of my all-time favorite films.  That said, I think Goodfellas broke more new cinematic ground than Mann’s crime classic. Prior to Goodfellas, the world of the Mafia was a very high-brow place as portrayed in The Godfather films. Criminals wore tuxedos to formal affairs and used their underlings to do their dirty work. The infamous montage that concludes The Godfather has Michael Corleone at a baptism, the picture of respectability, while his men systematically kill his enemies and consolidate his power. He takes over his section of the underworld without so much as mussing his hair.

Goodfellas, on the other hand, is about organized crime on a lower rung of the social ladder. Henry Hill, Jimmy Conway and Tommy DeVito inhabit a world that’s a bit more posh than the one Scorsese examined in Mean Streets (1973), but it’s far more “street” than the world of the Corleones. The crime in Goodfellas is seedy and leaves the audience feeling guilty that they are entertained by the lowlifes populating this world. The film has a rich streak of dark humor that makes you wonder what kind of sicko you must be to laugh at death and dismemberment.

It’s the same territory mined by David Chase eight years later in The Sopranos.  Without Goodfellas, there’s no Tony, Paulie, Christopher and Silvio. Scorsese’s masterpiece is the spiritual forefather of every crime boss anti-hero who followed.  Heat is a brilliant crime procedural featuring all the meticulous world-building details we’ve come to expect from Michael Mann. However, there were brilliant crime procedurals before Heat and after it.  Goodfellas just feels to me like more of a game-changer that shaped damn near every subsequent gangster film and television series. I take it you disagree?

ADAM:  I don’t disagree with Goodfellas cultural impact. I will admit that the film has spawned hundreds upon hundreds of imitators.  Most awful, some good, one or two great and yes… then there’s the Sopranos which out Goodfellas’ Goodfellas.

Heat‘s cultural impact is more subtle and widespread beyond the “police procedural” genre.  Without Heat, we don’t get The Dark Knight. Christopher Nolan makes no qualms about how much Heat influenced his seminal comic book movie.  It’s one thing when a sub-genre film influences the same sub-genre; it’s a completely different story when a sub-genre film influences multiple genres, feeling the “ripple” effect years and decades later.  Even something as simple as visual aesthetics. Heat influenced every action film to follow with the blue steel color grading that Mann and cinematographer Dante Spinotti all but invented with that film.

You spoke about the world building that Mann is known for.  The world building in this film (it began in a big way in The Last of the Mohicans) feels like Mann’s thesis statement on the matter.  The way that both the criminals and law enforcement inhabit this world is not dissimilar to the way that huge tent poles have their heroes and villains inhabit their worlds.  The film is modern in its “dropping you in the middle” of things, but gives you enough to move breathlessly along with these characters until you understand the dynamics at play.  This was something that few, if any, films (other than films Mann directed) had done on the scale of Heat.  Heat expected you to be intelligent.  Something that was revolutionary in the 90’s from studio film making.  Mann’s film feels like the beginning of complex narratives and human interactions within action/event films.  Without Heat, we don’t get The Dark Knight (as we mentioned), The Town, Inception and The Matrix among other films.

Goodfellas has a tendency to over explain every detail with the continuous monologue from Henry Hill making sure that every “T is crossed” and every “I is dotted”.  That monologue is nothing new or revolutionary, though used to great effect.  It’s a flourish Scorsese stole from the French New Wave.  All the tricks in Goodfellas are French New Wave tricks re-purposed for the gangster film.  In fact Goodfellas feels like The 400 Blows mashed up with Shoot the Piano Player.  Can we live in a film landscape that didn’t give us a high-water mark like The Dark Knight?

SCOTT:  I love that you brought up the voiceover in Goodfellas.  I’m usually a huge hater of that story-telling tool (or crutch).  Show me; don’t tell me as the screenwriting expression goes. Yet I always site Goodfellas as my example where a voiceover can enrich a  film and deepen an audience’s understanding of the world the characters occupy. “As far back as I can remember, I always wanted to be a gangster” is the perfect single sentence distillation of who Henry Hill is as a person. It’s a fantastic way to introduce a character. Of course, the voiceover in Goodfellas is so realistic because some of it is taken directly from Nicholas Pileggi’s book Wiseguy. (They didn’t call the Scorsese film Wiseguy because they were concerned it would be confused with the television series of the same name that ran from 1987-1990.)

Your question about The Dark Knight hits me where I live because that’s my single favorite comic book film ever. So, no, I can’t live in a cinematic world where The Dark Knight was never created.  And you are likewise correct that the opening set piece of that film plays like an outtake from Heat (in a good way). When it comes to influencing future entertainment, it may be safe to say that Heat and Goodfellas are equally influential or the edge may even tip toward Heat.

So, I’ll move on to an examination of the films themselves. The one thing that keeps Heat from being a five-star classic to me (meaning it’s about a 4.5 in my book) is Al Pacino’s performance that I not-so-affectionately refer to as Detective Hoo-Wah. Recently during the 20th anniversary celebration of the film, Pacino explained that he played Vincent Hanna like the cop was abusing cocaine outside the presence of the audience (ie. jacked up and in your face). That certainly explains some of the “bigness” of his portrayal. But, my questions are simple: Can a performance be a good/great performance if it takes an off-screen explanation to give the performance its proper context? Shouldn’t the subtext be evident from the performance itself?

ADAM: That’s a good question… I’m always of the theory that there has to be “spaces” or “gaps” in a film.  Now, don’t start thinking I’m speaking of Logic Gaps.  No, by “spaces” and “gaps” I mean giving a film room for you to breathe life into the spaces/gaps that are not narratively discussed.  I hate over explanation.  It’s part of the reason that I love Heat, maybe just a wee bit more than Goodfellas. It doesn’t over explain everything, allowing me to fill in the gaps of narrative space.  It’s by design; someone like Mann doesn’t do things haphazardly.  With that said… I’m going to have to painfully agree with you.  I shouldn’t need that much exposition off screen to understand why someone went “Big”.  In the case of Pacino, his “Big” is on par with Krusty the Klown on The Simpsons.

I love moments of the Goodfellas V.O.  That opening monologue is as beautiful an opening line from any great classic novel; “It was the best of times, it was the worst of times…”  I love certain explanations, but there’s a lot of the voice over that I wish wasn’t there.  I feel the “Wall of Sound” approach Scorsese and Pileggi take is too much sometimes.  I wish that Goodfellas would exist without (some of) it and let scenes play out.  My favorite moment in the film is played without dialogue or voice over.  It’s after the Lufthansa Heist, in the bar, the slow motion shot of Jimmy (DeNiro) as Sunshine of your Love by Cream plays.  It tells you everything you need to know about the next half of the film; Jimmy is going to kill everyone.  I am thankful that Scorsese knew when to pull back (sometimes) on that voice over.

I love that Heat is purposely obtuse and oblique with much of its characters life before the film.  Now, I will say that there are points where it’s dense for no good reason other than Mann’s predilections to “all behavior, no dialogue” (see Ali and the eight minute dialogue-less opening for the perfection of this directing tick).  The perfect example is Waingro, though you don’t need to know much about him there is a lot that could have been nudged shall we say for clarity’s sake.  This is all a really long way of telling you that I personally feel it’s a dangerous tight rope that’s subjective.  I love when subtext can be either read or taken from behavior on screen but even Michael Mann can sometimes miss the mark.

Question to you, both films are visually impressive but each differently.  Goodfellas draws heavily from the French New Wave with its constantly moving camera, hand held, slow motion, and all the tricks of the trade to bring notice that you are watching a movie.  Heat draws from Ozu and Jean-Pierrie Melville, stately camera work, methodical visuals and the city of Los Angeles as a lushly drawn character. Which of these films visual aesthetics work better to draw the audience into these worlds that we are getting a glimpse into?

[Scott orders a second cup of coffee as he processes Adam’s question.  We’ll give his answer and offer more discussion about these two crime masterpieces in the concluding portion of this piece.  Coming soon.]

Scott and Adam’s face off will continue soon…