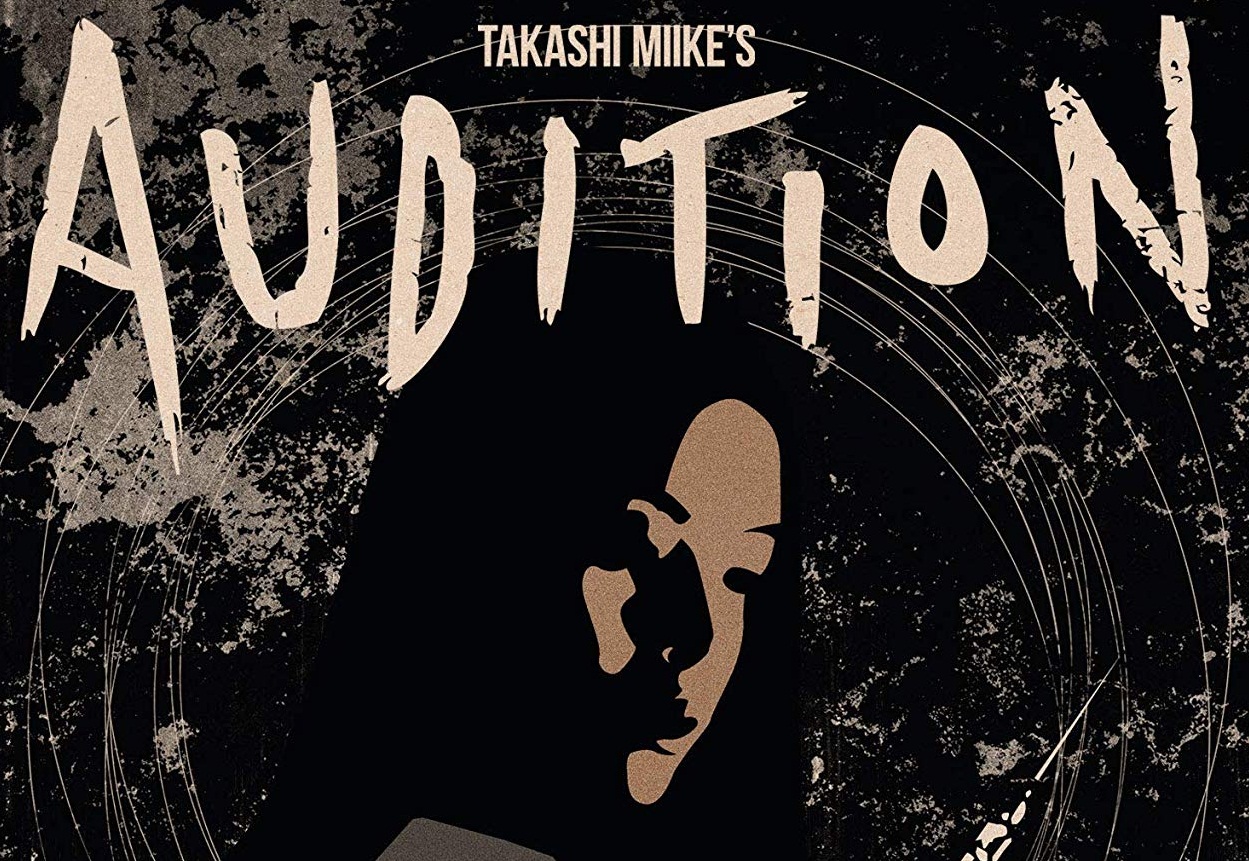 Finally, someone has the guts to release Takeshi Miike’s best film; Audition to Blu-Ray. After a long absence, Arrow Video has given the film a new Transfer and a host of great extras.

20-years on Takeshi Miike’s Audition stands as the director’s towering achievement. A dyed-in-the-wool Classic this dement dark and deranged Horror Romance has inspired works from PT Anderson to Eli Roth. Though none can touch the original’s power to shock and to provoke the most startling of reactions.

Aoyama (Ryo Ishibashi), a small-time TV executive lives a small existence. He has a teenage son, a dog, and his work. At his son’s suggestion, after 7- years of his wife is passing, Aoyama a attempts to find a wife. His best friend Yasushisa (Jun Kunimura), a producer, hatch a plan to hold Auditions for a non- existent part in a non-existent film. Aoyama becomes smitten with Asami (Eihi Shiina). Little does Ayoama he is not in store for your typical romance. Point, in fact, Aoyama is head to where not even Michael Douglas characters tread.

for many Audition is one of those renegade films that’s a reputation for the extreme Ending it has, so much so it has created a mythos akin to Martyrs. Audition is nowhere near Martyrs or The Inside or A Serbian Film. The brilliance of the film is that 85% of the film is an astute broken romance of a character study. Miike’s film chooses to observe and provoke in some instances rather than direct you to feel, a specific way about a character. The reason the film raises a reaction is because of just how good of a character study it is.

Miike with the help of screenwriter Daisuke Tengan adapting a novel from Ryu Murakami of the same name have shaped the film to lull you into a sense of safety. They make Audition begin at a slower pace. Though things turn and get dark that pace never changes. Even during its brutal ending, the pace remains that ever constant slow burn. This is the brilliance of Miike. This technique has been used almost to the point of cliche now but here it still remains a perfectly rendered and pure. Here it is in service to the story and not the horror set pieces. When the opposite is true of every other film that uses the cliche.

Audition stands above the other films that attempted the style of bravado filmmaking Miike succeeded at. The reason is singular; it is not by design a horror film. At its core Audition is a romance and love story. Albeit this romance is deeply disturbing and Sadomasochistic in a way a film has never been before or since but is still a romance. Everything that Asami does, she does out of a true love of Aoyama. And therein lies the brilliance of Takeshi Miike and Audition. While all see it as a horror film, Audition and it is director do not.

The work that Arrow has done on this brand new 2K restoration of original vault elements is nothing short of beautiful.  The film was shot very quickly and cheaply by Miike and Cinematographer Hideo Yamamoto, so there are issues with the image but that’s an affectation of the negative itself and not the work that Arrow has done.  Arrow has kept the heavier grain structure and deep contrast levels within the image without sacrificing for what could have been a flat and dark image.  It’s the best film has looked, even theatrically.  Bravo to Arrow for such considerate work.

The commentary is hosted by Film Critic Masato Kobayashi featuring director Takeshi Miike and Daisuke Tengan.  Kobayashi is very thorough with his prompting of both Miike and Tengan with a variety of questions about the production, the novel, actors, development of the script, the Festival Tour Miike took around the world with the film.  All is covered here.  This commentary is in Japanese with subtitles

Tom Mes is a solo commentary with the critic as he dissects not just the work here but gives you a better understanding of the Culture that this particular film was sprung from.  Mes’ commentary is in English.

Takeshi Miike: Ties that Bind is a 30-minutes interview with the director about the origins of the film and the film itself. Miike begins talking about how specific a Japanese film he thought that it would only be for them much to his surprise found international audiences. How he is labeled as horror and director specializing in violence, which he loves. Divided into sections the director talks about the novel, his actors, the production and everything you’d want to know.

Ryo Ishibashi: Tokyo- Hollywood is a 16-minute interview with the actor. From his beginning and the difficulties of getting roles bc there is no studio system or any system for that matter. The topics range from typecasting, Audition, working with Miike, working on Black Rain and other American films, and life post-Audition.

Eihi Shiina: From Audition to Vampire Girl is a 20-minute interview with the actress. Discusses among other things how the “kiri-kiri-kiri” came about, her auditioning process, not having acted prior to the film, and her career post-Audition.

Renji Ishibashi: Mike’s Toy is a 21-minute interview with the actor who played the Ballet School instructor. The actor discusses his work with Miike that extends way beyond Audition, the work in Audition, how close the two are and their working relationship among other things, and how he aptly describes Miike as one who destroys rather than creates.

Ren Osugi: The Man In the Bag Speaks is a 16-minute interview who plays one of the more disturbing and iconic roles in the film. Osugi talks at length about getting into acting in the 70s.

Damaged Romance: An appreciation by Tony Rayns is a 35-minute visual essay is actually an interview with the critic.  Rayns discusses Miike career from its beginning in V-Cinema (aka the Japanese DTV scene) and how he got to Audition. Discusses the ending, how there is no Feminist movement and how this is not a feminist movie among other fascinating details.

Rounding out the features are both the Japanese Trailer and International one and a still gallery. As the text included before selecting the Japanese trailer it does contain spoilers. The international one is much more… generic. Both appear to have been remastered for the release. The still gallery contains about 16 behind the scenes images from the production that can either be navigated through or just left running.

Audition is a masterpiece.  A dark romance that’s more akin to The Phantom Thread than any of the “Extreme Horror” it helped birth.  HIGHEST POSSIBLE RECOMMENDATIONS!!!

Arrow Video’s Blu-Ray of Audition is out now