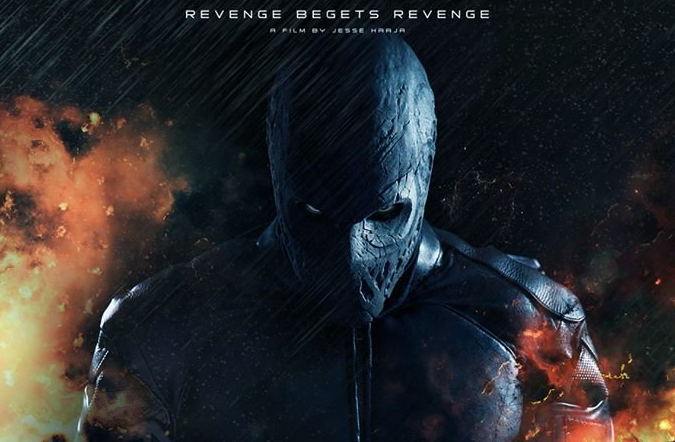 Marie likes the idea of a superhero avenger story set somewhere other than the United States, and although Rendel: Dark Vengeance has a good look about it, its structure is unfortunately all over the place.

We’ve all seen how most superheroes appear to come from the United States of America. Or if they are not from Earth, then they end up in the US by default. And so it’s always good to shake things up a bit and have a story where a completely different country provides the story and characters (and I don’t mean Wakanda).

So in Rendel: Dark Vengeance our location is Mikkeli, a small town in Finland. To call Rendel a superhero is not actually correct; as the title suggests he’s more of a vigilante driven to stop bad people by taking on a secret identity after terrible things happened to his wife and daughter. Think Finnish Punisher or Daredevil if you’re trying to get an idea of the tone.

I understand that Rendel: Dark Vengeance is available in both a dubbed and a subtitled version – naturally I went for the subtitled option as that’s my usual preference. The downside to this is that some of the translations produce some very stilted dialogue – or it could be that the original screenplay is not that good: I couldn’t tell which, and it was a shame for the narrative.

Speaking of which, the film is also contending with that eternal superhero trope – the origin story. Rendel: Dark Vengeance opts to address this using a strange intermingling of events which, while not exactly flashbacks, are telling the character’s back story in a very confusing fashion. This means we’re a whole hour into the movie before The Terrible Thing happens to our main man, and the pacing is subsequently all over the place. There’s another reveal even later than this, not to mention a collection of secondary characters who appear out of nowhere, leaving the impression that someone just threw all the scenes into the air and assembled them in the order in which they hit the ground, rather than something which would be slightly easier to follow. I can see that it’s trying to do things a bit differently, but it misses the mark and is definitely too long.

It looks very good though – the lighting and framing of some shots and scenes do reference images which might be seen in a comic book. The villains are seedy money-grabbers in their impeccable clothes and homes, and the henchmen run the gamut from knucklehead to comic relief to family disappointment, hanging out in their grimy den.

All in all, it’s an interesting venture which, for me, didn’t quite work. But the end credits also appear to set up a sequel and now that the origin story is out of the way, I might be tempted to give that a watch.

Rendel: Dark Vengeance is available in the UK on DVD and digital download on 25th February.