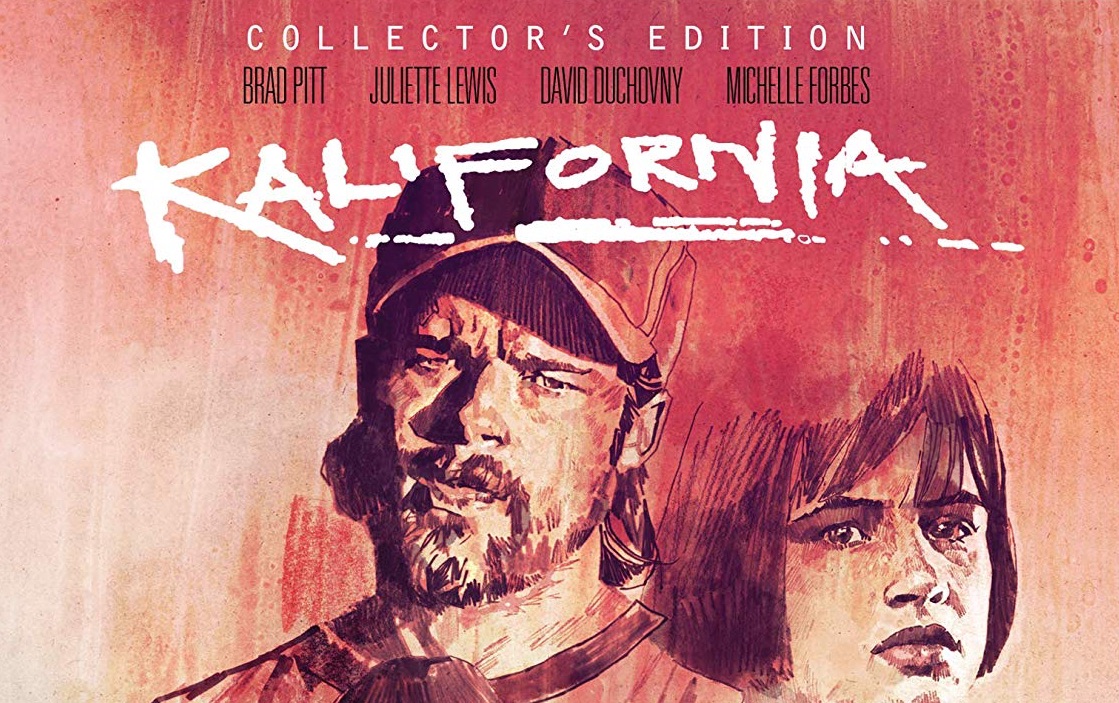 Adam goes on a dangerous road trip with Brad Pitt, Juliette Lewis, David Duchovny, and Michelle Forbes to KALIFORNIA!  Shout Factory has resurrected the Slow Burn Horror Film to Hi-Def life on Blu-Ray with an impressive transfer and extras.

2019 is quickly becoming the year that I discover just how many films I have wrongly rested on. Add Kalifornia to that list of films. The Dominic Sena debut feature starring Brad Pitt, Juliette Lewis, David Duchovny, and Michelle Forbes is National Lampoon’s Vacation by way of Badlands.

Proto-Hipster couple Brian (Duchovny) and Carrie (Forbes) are living your typical art culture lifestyle. S he’s a photographer. He’s a journalist. Brian has a book due on serial killers with very little to show. Carrie has just been rejected for a spot in a gallery exhibition of her photography. Brian suggests they road trip across America to write and photograph famous location of serial killers killings. Great, but to help pay for the gas and expenses the take on couple Earle (Pitt) and Adelle (Lewis). What everyone knows but our Hipster Heroes is Earle is a serial killer himself. It is only a matter of time until Earle’s true nature begins to show and Brian and Carrie have their own experience to write from.

When talking about Kalifornia the one and only subject that really matters is Brad Pitt.  Pitt as Earle Grayce is amazing. The work has to be some of the best and least seen, of early era Pitt.  There is something feral and unpredictable to the performance that has never been seen again.  Even 12 Monkeys and Snatch have the kind of wildness seen here.  Sena as a director is a perfect foil for Pitt as a performer as the director lets him go to the Spinal Tap “11”. In most cases, this would be a detriment to the film but in Kalifornia, it only helps in its eventual descent into hell with Earle as their demented guide.

The film is a slow burn of an action thriller. Less horror and more of a drama the film is designed by Sena and screenwriters to take its time to allow us to get to know all four characters full of before it unleashes the horror. But when it does Lord does it. Kalifornia smartly allows that time for character development.  When Kalifornia does unleash the horror and action it is a go-for-broke lacerating film that many action and horror film fan will delight in discovering or rediscovering.

Both the Theatrical and Unrated Cuts appear to come from the same transfer.  There may be only slight differences in either.  The transfers themselves look solid with a healthy amount of grain embedded into the transfers themselves. The sharpness and contrast of the images look great but one can tell these are sourced from an older transfer.  Both cuts of the film still do look solid especially if the viewer falls on the more filmic look to a transfer.

Note: The difference between the Theatrical and Unrated is a bit of gore have been taken out and the mid-film sex scene between Duchovny and Forbes is a bit more graphic.  Nothing else has been altered or changed between the two.

Going to Kalifornia Road Tripping with Dominic Sena is a 25-minute interview with the director. Sena discusses how he started as a Cameraman and moved up to directing. He discussed the changes to the script once he came on board.

Original Featurette is another vintage 5-minute EPK style making-of that Shout Factory has managed to unearth for this release.  Filled with interview snippets from the cast and lots of B-Roll footage this featurette is a great nostalgia kick and also a fascinating document as to how films were promoted in the early ’90s, which is a huge divide as to how films are promoted now.  Huge thanks to Shout and their continued support of these types of extras on their discs.

Original Interviews is a 2.5-minute interview with Brad Pitt, Juliette Lewis. This piece is taken from the MTV show The Big Picture with Chris Connelly. Pitt is on set during Legends of the Fall.

Rounding out the extras is Trailer and TV Spots. The Trailer appears to have been remastered as it looks very good. The TV Spot (there are four) the first three appear to be European trailers and the last is a very American TV Spot.

Kalifornia is definitely worth your time. The dark drama is built for anyone that loves slow-burn horror films.  Recommended!!!