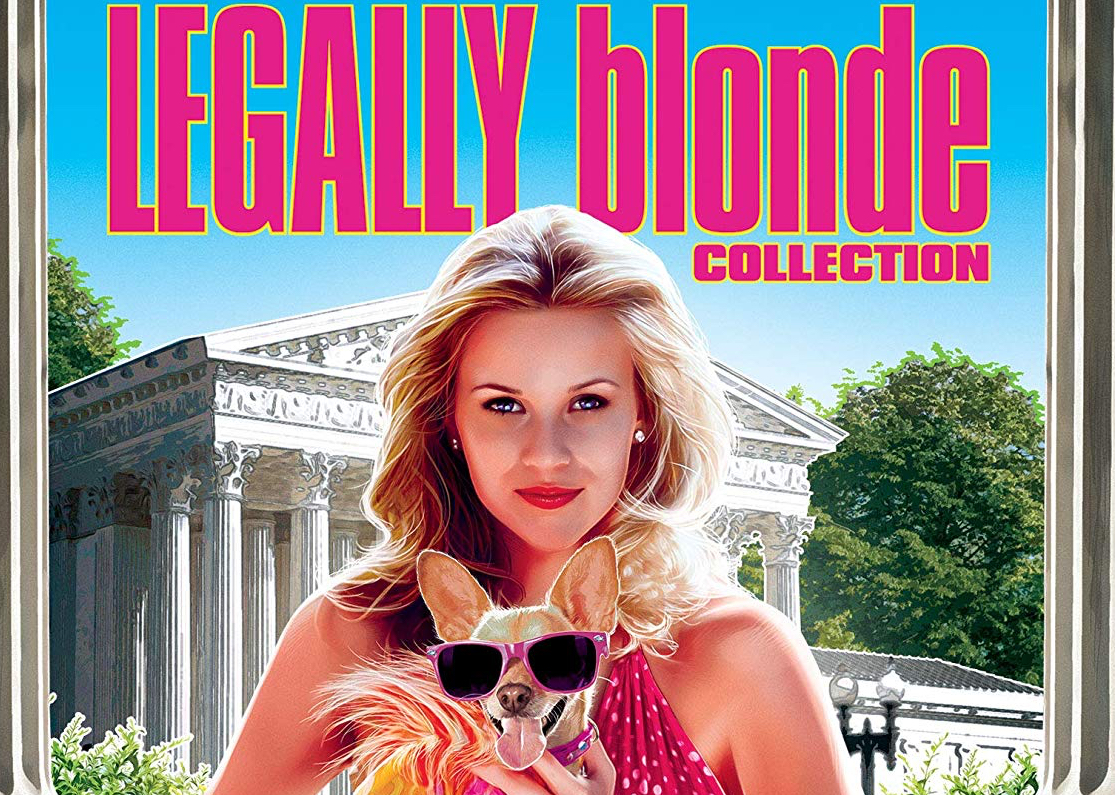 Adam is delighted and charmed all over again by Legally Blonde and Legally Blonde 2: Red, White, and Blonde. The Reese Witherspoon starring films are being released with a host of extras and brand new 4K transfers from Shout Factory.

Some films are age proof. Close to 20-years on the Robert Luketic directed film still shines as Comedic Gold. It also Legally Blonde stands as proof to why Reese Witherspoon, even now, is a force (both Comedic and Dramatic) to be reckoned with.

Elle Woods (Witherspoon) has everything as she awaits her boyfriend Werner (Matthew Davis) to propose to her. A rude awakening is in store for Elle as Werner dumps her because his legal and political career requires a more “serious” partner. Never to be one to look away from a challenge Elle sets her mind to go to Harvard Law like Werner. And she does get into Harvard.  But that just the beginning of Elle’s journey of self-worth and recognition that she is more than just someone’s soon-to-be Wife.

What makes Legally Blonde so great even two decades on?  The film is more than the sum of its parts. Screenwriters Karen McCullah Lutz and Kristen Smith adapting from the novel by Amanda Brown from finding the core of the film is not Elle’s love life but her discovery that she is a truly great Lawyer. The film running a little over 90 minutes manages to cover a great deal of time allowing us to see how Elle’s unconventional (by Harvard standards) approach isn’t just made for her Sorority and fashion sense.

As good as the cast is, Legally Blonde, is designed as a star vehicle. Without the truly spectacular work by Reese Witherspoon, the film is just another in a long line of lesser Born yesterday clones. Witherspoon gives Elle the charm you would expect but under the charm lies a strength, resilience, and determination that wins over even the grumpiest of viewers. Elle isn’t just another plucky heroine, what is so much fun and satisfying is watching her overcome every obstacle in her way rather than the accepted way.

Legally Blonde is still the unexpected joy of a comedy it was when it was originally released.

The sequel trades the original’s small scale and effective charm for Goofy storylines and hokey thematics. Legally Blonde 2 manages to be successful because of its performers.

Elle and her dog Bruiser go to Washington D.C. to take down an evil cosmetics company that is holding Bruiser’s mom hostage. Along the way, Elle plans her wedding makes Regina King a believer, and help Bruiser start a relationship with a Senator’s Rottweiler. Oh, and of course save Bruiser’s mom and start a Million dog March (I shit you not).

The film’s success lies solely on the performers. This film brought in not only King but Bob Newhart, Sally Fields, Bruce McGill, and Luke Wilson to help with this lunatic plot. Each performer works overtime to help the film not crash and burn. Reese Witherspoon as in the original is all charm and resilience, even in the dumbest of moments. Watching Witherspoon and King go toe to toe, two academy award winners is one of the highlights of the film.

Legally Blonde 2 isn’t as good as the original but its goofy and sincere nature will win most over. If that isn’t enough, watch it for all the talent on display, including multiple Oscar winners, and genuine legends of T.V. and Film Comedy.

Both transfers are stellar.  It’s the new 4K Scan of the Original Legally Blonde Camera Negative that is the real star here.  The transfer leans heavily on the grain structure giving it an overall filmic quality that’s almost perfect.  Legally Blonde 2 is sourced from an older transfer and still is a solid image but does not come close to the pop that the new Scan of Legally Blonde.

Making Margot a look back at Legally Blonde with Jessica Cauffiel is a 13-minute interview with The actress.  She discusses topics such as she was cast in one session it was just “she was the part”. She actually researched with Reese Witherspoon at a UCLA Sorority. They based Margot on a real-life girl.

Deleted scenes amount to about 10-minutes all introduced by Director Robert Luketic. None of the deleted scenes should have been included. The funniest is the post-breakup the scene with Elle’s besties consoling her.

Inside Legally Blonde is a 21-minute archival making-of documentary. The featurette starts with Amanda Brown’s Novel and its origins with author’s law school experience at Stanford and goes onto hiring screenwriting duo Karen McCullah Lutz and Kristen Smith who had come off of 10 Things I Hate about You and moves into casting, production, and reception. The doc is pretty thorough for a twenty-minute making of.

The Hair that ate Hollywood is a 9-minute featurette about Joy Zapata Key Hair Stylist and how much she was a part of the production and how specific “Blonde Coloring” was for not just Reese Witherspoon but the entire cast. Who knew just how involved and key the hair department was? The fact that Witherspoon had over 30 hairstyles is an amazing feat in itself but the involved nature of how they had to track it just gives you a better appreciation for the work done.

Rounding out the special features is the trailer and music video. The smartly cut trailer looks to have been remastered. The 3.5-minute music video for Hoku’s earworm of a song “Perfect Day” which is so early 2000’s you may end up in 2001 if you’re not careful.

The cast commentary includes Jennifer Coolidge, Jessica Cauffiel, and Alanna Ubach is okay.  They do manage to include some great production anecdotes but one would have loved to have had a Director’s Commentary or even Witherspoon coming back to do another Commentary track as this is one of her first films as an active Producer.

Back in Blonde – a look back at Legally Blonde 2: Red White and Blonde is a new 8-minute interview with Jessica Cauffiel. The interview picks up where her last left off. She discusses Witherspoon taking over producing duties, working with Sally Fields, Bob Newhart, and Holland Taylor, how the superstardom affecting the production. Also a tidbit about the status of Legally Blonde 3.

Blonde Ambition: The Making of Legally Blonde 2 is a 22-minute archival making-of featurette. Similar to the one included on the first disc it was produced during the heyday of DVD special features. Talking heads include Reese Witherspoon, producer Marc Platt, Director Charles Herman-Wurmfeld, Screenwriter Kate Kondell, and cast and crew.  Like the first making-of, the featurette covers the origins of the story, hiring a new director, and the fairly involved production.

Stars and Stripes, Never! is an 8-minute featurette about the wardrobe and costuming with costume designer de Rakoff Carbonell. Carbonell and crew discuss the 65 wardrobe changes among other challenges.

Elle’s Anthem is a 7-minute featurette on the making of the score with composer Rolfe Kent. The featurette includes B-roll footage of Kent in-studio recording the film. Tidbits include that he wrote the score in a month, the changes to his approach to the sequel, how Elle has three separate themes.

The deleted scenes amount to about 10-minutes of excised footage. All material that was rightfully cut. There isn’t any introduction to the scenes by director Herman-Wurmfeld. They include a cut intro to Sally Fields’ character and a montage inspired by Rocky that had my jaw in the floor (with Bob Newhart).

The gag reel is your standard gag reel with Witherspoon among others flubbing lines.

Hair Apparent is a 7-minute featurette regarding Elle Wood’s hair.

Puppy Love is a 2-minute featurette on Bruiser the dog and now central plot figure if the film.

Pretty in Pink is a 7-minute featurette on the production design with production designer Missy Stewart. She and director Herman-Wurmfeld discuss the research to get the “DC look” down and how Elle evolves.

Rounding out the special features include the trailer, a Leann Rhimes music Video.

The Legally Blonde Collection an instapurchase.  With a new 4K transfer, a wealth of extras, and both films it’s a can’t miss for any fan.  HIGHEST POSSIBLE RECOMMENDATIONS!!!!