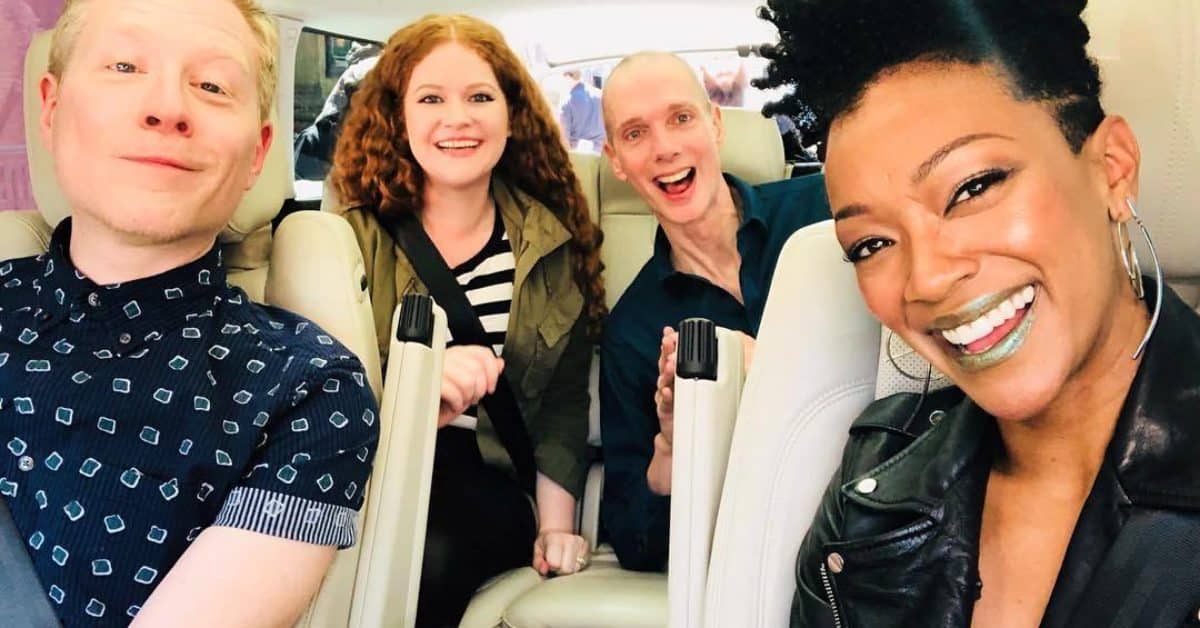 The Kobayashi Marie and it’s Captain boldly go into dangerous territories… The Star Trek Discovery episode of Carpool Karaoke. Read below to here how the Discovery crew fared…

I’m familiar with the concept of Carpool Karaoke, but I’ll admit I’m not a regular viewer.

But this time I was challenged to watch a particular episode, the one featuring our very own Sonequa Martin-Green, Doug Jones, Anthony Rapp and Mary Wiseman. It’s time for … Star Trek Karaoke!

Now, I know they need to find a way in to the episode, and maybe I’m just being way too pedantic, but when the cast is in uniform on screen, then I can’t help but feel they should be in character. So when they suddenly talk to each other as themselves not the characters, I don’t want to see it!

Thankfully, as soon as they beam down into the eponymous car, they’re in civvies so I can relax. Or can I?

First up is KC & The Sunshine Band’s disco classic That’s The Way (I Like It) which ended with the revelation that Mr Doug Jones once had rather a lot of hair on his head – and there’s a photo to prove it! That was unexpected, to be sure.

It took me a few moments to realise that Sonequa Martin-Green was actually driving – she rarely had both hands on the steering wheel and I was a little uneasy watching her drive! Where’s Emily Coutts when you need her? It was lovely to catch glimpses of Toronto as the car moved through the streets though, and it left me with the feeling that I want to go back there.

Next up is yet another disco classic – I Will Survive. A good choice, given the trials that each of the four characters has experienced in Season 1 of Discovery. It’s also a song that you can’t help but sing along with no matter what you’re doing, and I imagine most people will know the words. Which had me wondering – do they get to know in advance which tunes will be used so that they have the chance to go away and learn them? Are there carefully concealed cue cards so that they don’t look too silly if they forget the words? Or is it just random good fortune that they know everything?

The four then get involved in a fascinating and hilarious discussion about tattoos. Personally I’ve never been tempted to get one, and so the idea of having someone sign their name on my skin and then getting that transformed into a tattoo sounds both painful and unnecessary.

And just as I’m wondering if I could ever imagine getting a tattoo, OMG what pierces the bubble but Ed Sheeran. Aarrgghh! It’s The Shape of You– and I can’t help but feel that they definitely missed a chance to crowbar in a reference to The Shape of Water somewhere along the line. Guillermo del Toro’s Academy Award winning film featured Doug Jones as a fish/man creature, and he was the only one of the four main actors not to be nominated for an Academy Award. Disgraceful.

In The Shape of Water, Doug’s fish/man eats boiled eggs and in this episode of Carpool Karaoke, the four singing passengers try out Space Food – in other words, the type of food that contemporary astronauts might eat on space trips, and not replicated banana splits or even tea, Earl Grey, hot. It’s fair to say that the space treats do not go down that well – some excellent faces are made.

Predictably, there has to be a space-themed song too, and the choice is David Bowie’s Space Oddity. Admittedly it’s a good singalong number with some hilarious attempts at a British accent – but it’s as cheesy as a four-cheese pizza with a side order of cheese.

But wait – someone made the decision that we still haven’t had quite enough cheese, and so we’re about to get Star Trek Discovery – The Musical. And unfortunately, the quartet’s version of Seasons of Love from Rent is an ode to nerd-dom delivered in full Starfleet uniform. This song definitely shows off Anthony Rapp’s singing ability compared to the other three. I know it’s karaoke and it’s not supposed to be perfect, but it’s in the wrong key for the women and makes it really obvious that one of these voices is not like the other three.

So yeah. I’m with Mary Wiseman here – maybe everything doesn’t have to be a musical. Please don’t do it again.

At least there was no James Corden this time.

You can catch up on the prior columns here!