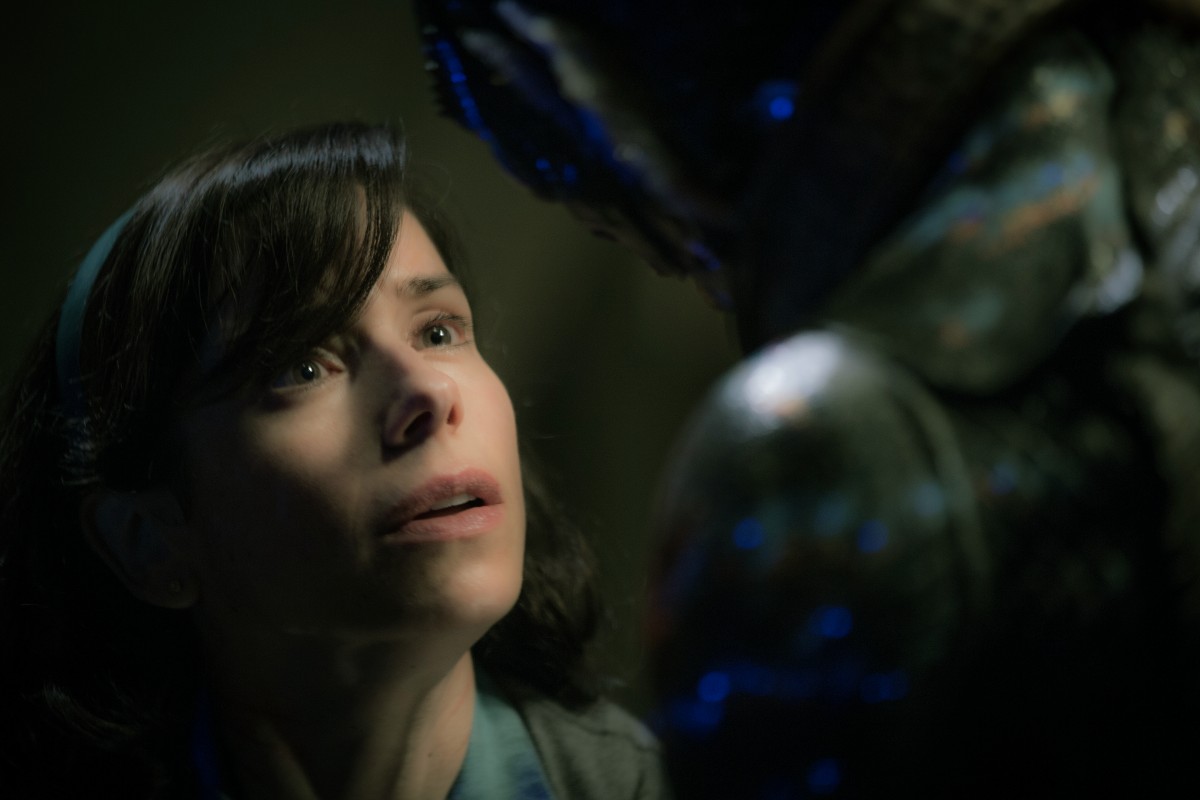 The Shape of Water represents a new phase in the career of writer/director Guillermo del Toro.  The film has all of the trademarks of the director’s greatest work while adding new behind-the-scenes collaborators and working for the first time in English for a non-tent pole project.  Del Toro seems to be inspired by shedding his normal trappings.  Gone are his typical color palette, camera movements, even his favorite actors (with the exception of Doug Jones).

The film, set in 1962 Baltimore, finds our heroine Elisa (Sally Hawkins) plodding through her lonely existence.  The opening excels in showing us the mundanity of Elisa’s life while never boring the viewer.  We meet the people in Elisa’s life.  We see the work that Elisa does.  We feel the loneliness that Elisa feels.  Del Toro manages to play these scenes with a sense of fairy tale wonder that both intrigues the viewer and shows the bonds that tie Elisa down.

Elisa works in a top-secret facility.  Her responsibilities are essentially on par with house cleaning.  Her days are filled with simple and entertaining one-sided conversation with her co-worker Zelda (Octivia Spencer).  The conversation is one sided as Elisa is mute.  Though the world in which she lives treats Elisa with a distance, del Toro never does.  Elisa is a fully-realized, sexual, intelligent woman.  This is never pointed out, but is simply shown matter-of-factly.

Upon the arrival of Strickland (Michael Shannon) and Dr. Hoffstetler (Michael Stuhlbarg) with their very precious and very secretive cargo, the film veers into del Toro’s fantastical territory. Through simple curiosity, Elisa comes into contact with what Strictland dubs “The Asset” (Doug Jones).  The Asset is an amphibious creature found in the Amazon that the government has deemed of the highest priority to study.  The curiosity turns into more as Elisa begins to secretly meet The Asset teaching it about music and showing it a kindness that it has never been shown.

Writers Vanessa Taylor and del Toro use their fairy tale as a mirror for both the good and bad of humanity.  Much will be made about how this fits perfectly into our current anxiety-filled era of abuse of power, but the writers have not created something so specific.  Their work is so universal and primal that it could be applied to any era.  These are not issues exclusive to current society.  The very fact that they set the film in 1962, but it feels appropriate for any time period shows the power and skill on display here.

The film marks a maturity in the director’s work that though always present previously, was always on the periphery.  The Shape of Water for the first time in the director’s career has him venturing into themes dealing exclusively with adult protagonists.  The frank display of sexuality and allowing his heroine to be a sexual being is something that has rarely been present in his films.  One need only look at the complicated sexuality present in Crimson Peak to see it stands in stark contrast to the director’s norms.  The sexuality prior had always been chaste or tainted with a sense of religious guilt.

Here the director uses sexuality and sex as a force to break the bonds that tie Elisa. The Shape of Water is both romantic and sexual.  del Toro manages to strike this tonal balance.  Oftentimes films will either be sexual or romantic.  Rarely do you find one that is able to handle both without feeling salacious.

Part of the reason for its thematic success is how overwhelmingly female centric the sexual imagery is.  Though Hawkins is shown nude for a good portion of the film it never feels leering nor perverse.  Rather it’s an act of self-expression, freedom, independence.  Many will find the sly nods and the usage for water and wetness as some of the most stunning and empowering imagery of the year.

The cast is uniformly perfect.  Sally Hawkins as Elisa is an unorthodox choice for a female lead but is the exact reason the casting is perfect. A skilled and adept performer (see her beautiful work in the underseen Maudie) makes even the most tricky and challenging sections here seem easy.  There are tonal shifts that would fail in the hands of other actors hands.  Hawkins manages to be able to take even the trickiest moments and make them feel grounded.

Hawkins’ performance is tied to the brilliant work done by Doug Jones as The Asset.  Jones’ work with del Toro throughout the years could be seen akin to Scorsese and De Niro or even del Toro and Pearlman.  The performer’s work here is exquisite, making the creature come to life in a wordless performance.  Most performers under heavy makeup appliances are overlooked, but Jones’ subtle work should not go unnoted.

The rest of the cast is fantastic.  Michael Shannon continues to prove why he is one of the best working actors today.  His work as Strickland is both frightening and funny.  Richard Jenkins is heartbreaking as Hawkins’ sad sack neighbor.  Octivia Spencer and Michael Stuhlbarg continue their streaks of amazing supporting work in great films. Much of the work done here is tricky as del Toro’s use of character as themes is in play here and the co-writer/director pushes his cast further and further.  Their work is as accomplished as any award season contender.

One cannot praise this film without mentioning the beautiful whimsical score written by Alexandre Desplat or the amazing production design and cinematography by Paul D. Austerberry and Dan Lausten respectively.  These key collaboration changes from del Toro’s normal crew has changed the look and feel of what a del Toro film is.  The film’s set-bound production is recalls the studio-produced fare of the 1960’s.  Austerberry and Lausten shower everything in a beautiful green hue that very pointedly recalls Hitchcock’s Vertigo in the best way possible.

The Shape of Water finds del Toro at the height of his powers as a storyteller. His ability to shift his stylistic flourishes but remain true to his sensibilities further proves why he is among the greats.  There is so much more to this film that one must experience on their own.  To describe it would be to ruin the tale of love and hope that del Toro has created.

The Shape of Water comes directly from the heart and soul of Guillermo del Toro. One hopes that something as handcrafted and passionately told as The Shape of Water captures the hearts and minds of the movie-going public. Run do not walk to see this on the biggest screen possible.

The Shape of Water Opens in Limited Released on December 8th in New York and Los Angeles.

2 comments on “Film Review: The Shape of Water”