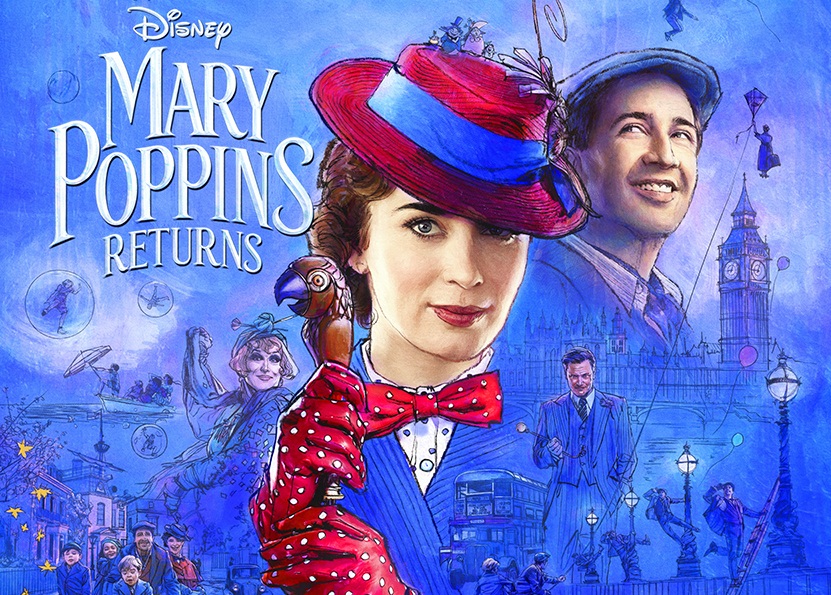 Sequels are just as much an Art as creating original content.  This is doubly true when the sequel you are creating is almost six decades later and is a beloved multi-generational childhood movie.  That was one of many roadblocks in front of Rob Marshall and Company when proceeding with a sequel to Mary Poppins.  Lighting in a bottle almost never strikes twice and it’s too early to tell but Mary Poppins Returns does its best to recapture said lighting.

Set a generation later as Michael (Ben Whishaw) and Jane (Emily Mortimer) Banks now grown have their own set of problems.  Michael, now a widow (does Disney ever produce anything with duel living parents nowadays?), has three children of his own and a boatload of problems.  The bank is foreclosing on their childhood home in less than a week.  What is a family to do?  Well, if you’re in this universe… nothing because no sooner than all is lost, Mary Poppins (Emily Blunt) appears to not so much save the day but like Paddington bring a ray of light and hope to the family in the most unexpected of ways.

Marshall and his crew of Screenwriters and Musical Writers (David Magee, Marshall, John DeLuca, Marc Shaiman, and Scott Whittman) have done justice to not only the original film but the world that was created by PL Travers.  Everything is agreeable and straight down the middle for your enjoyment.  The songs, music and choreography of the entire film are designed, and successful, in recalling the original film’s wonderful score/songs by the Sherman Brothers.  There are standout moments but all feel… repeated from the original.  Even down to the mid-film animated sequence.

Everything is done perfectly and beautifully.  Cinematographer Dion Bebe manages to create a film that is both visually a Candy Pop Confection and serious Musical with acrobatic movements that will delight any serious Movie Musical Fan.  Though visually the film is too perfect even around the edges to feel like a true companion to the original.  Unlike the work of cinematographer Edward Colman on the original, all of the shabby imperfection, which made the original such a delight, is not present here.

The 45-minue Q&A with Marc Shaiman was a wind of fresh air.  The Composer and Co-Songwriter of the film was in fine form as he recounted his involvement, his history with director Rob Marshall and being an general all-around wit.  Here are some of the highlights of the conversation with Hollywood Reporter’s music correspondent Byron Burton.