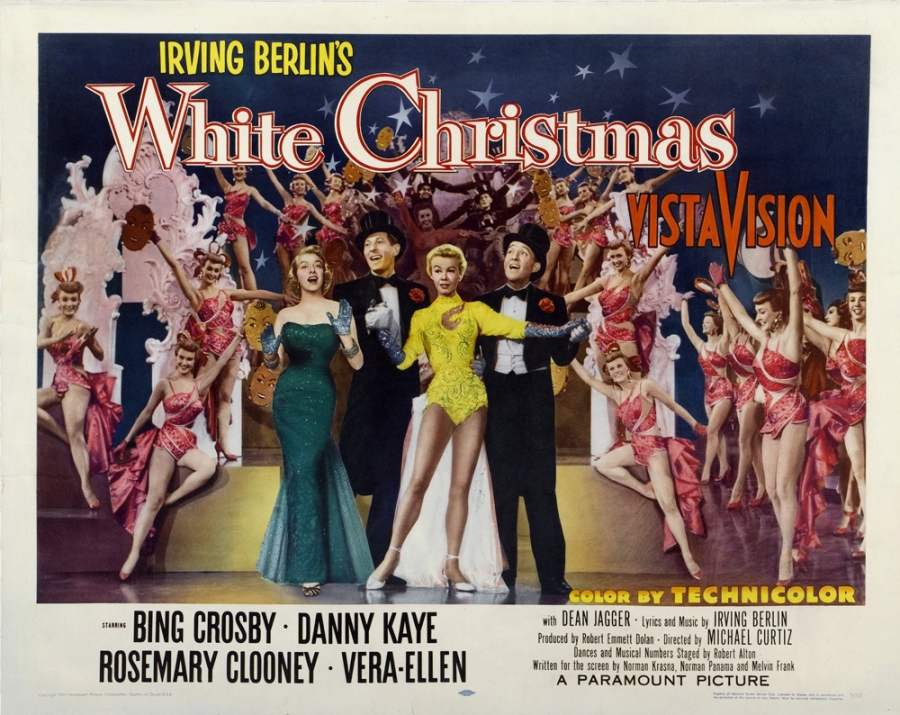 It is an unofficial rule in the Moe household that we avoid Christmas music on the radio until Thanksgiving has passed. I have never figured out who established or enforces this guideline, but I did find myself still following it at age 26 when I returned home from class recently and informed my parents to stay clear of a few local stations for the next few days and weeks. Old habits die hard.

In the post midterm election commercial craze it is now not unusual to see back-to-back ads for holiday deals whether it be food, gifts, travel costs, etc. The same could be said for the increase of advertisements for films that will be coming to theaters, Netflix, Amazon Prime, and Hulu around December 25th.

While the 2018 “Holiday Blockbuster” lineup is promising, many still choose to stay home and enjoy the televised reruns of yuletide films past. One of those iconic films, thanks to AMC, is the 1954 musical, White Christmas.

Starring Bing Crosby, Rosemary Clooney, Danny Kaye, and Vera Ellen, under the direction of Michael Curtiz, White Christmas graces millions of screens each year for that nostalgic trip down memory lane. When a successful song-and-dance team (Crosby and Kaye) travels to Vermont to help save the failing inn of their former commanding general, they find themselves not only becoming romantically involved with an equally talented sister act (Clooney and Ellen), but find the true meaning of the holiday season: home is where the heart truly lies.

Interestingly enough, the film has been met with lukewarm reactions since its release nearly sixty-five years ago. At the time of the film’s release, the New York Times was not a fan of the film’s performances and plot, while Variety magazine raved about the cast, score, and choreography.

So how does one take this film and revamp it not only to please a greater number of modern critics, but also the audiences who might find the story and score to be dated or bland, but are craving a winter musical to be remembered? Hopefully this month’s column answers that question.

With their recent success in revitalizing the musical genre, Michael Gracey (The Greatest Showman) and Damien Chazelle (La La Land) would be an impressive collaboration given their resumes and their appeal to theater-going audiences. While Chazelle tends to appeal to adults, and Gracey to adolescent and young adult audiences, a joint project and mixture of each man’s artistic point of view could serve the remake well in grasping the attention of a vast audience.

While most of the songs could or would need to be kept from the original film, if anything was left to interpretation, variation, or a new song were to be added, it would be done under the eye of Justin Hurwitz (La La Land). John Debney and Joseph Trapanese could contribute to the score as well, given their success with The Greatest Showman, however Hurwitz’s eye and ear for emotional tone within a scene feels closer to the original film without making it too “flashy”.

Now hear me out, I know these two actors do not tend to overlap when it comes to their work, but both could take on the lead role in their own way. Jackman recently has been the new face of leading men in the musical genre. Given the recent audience reaction to his work, his ability to blend into his roles, and his triple-threat skill set of acting, singing, and dancing he could have the same effect as Crosby.

Then there is Seth MacFarlane. While some might think he is anything but a leading man in a dramatic role, that is not true. His range might not be as vast as Jackman’s with regard to past roles he has starred in, but his vocal range, love of the classics, and devotion to his craft could make him a strong runner up. If anything, he is just a thought or a bribe to give the part to Jackman.

Danny Kaye was gifted with the ability to be both comical and graceful in his singing, performing, and in his dancing. While I toyed around with the idea of Neil Patrick Harris and Joseph Gordon-Levitt, Morrison lingered in my mind given that he has the past experience from film, TV, and Broadway to be compared to Kaye, but to also make the part his own. Since we have not seen a lot of Morrison on the screen in recent years, this could be a good chance for him to get back out there, should he want to.

Like Morrison, Catherine Zeta-Jones has not appeared in too many widely known films or TV shows in recent years. While most remember her for her steamy role as Velma in the film adaptation of Chicago, a vastly different style and tone compared to White Christmas, it showed the world that not only could she sing, but that she could dance, too. Given her softness that appears in each of her characters, even Velma, I feel that she could be considered for Betty unless another stronger choice were to be found.

Some of the most memorable scenes of White Christmas are the dance numbers by Vera Ellen. One would encourage that remain key to whomever the remake would consider for the role of Judy, who tends to physically act more than speak. Adams has shown that she is not only a gifted actress, but one of the most gifted of recent time. Given her past training in ballet, and her ability to time the emotions and energy of the characters she plays just right, I do not think it would be too difficult for her to switch it up and show her physical range, more than her verbal one.

If you have any suggestions to revamp a film in the column, leave a comment or reach out via social media. I would love to hear your own ideas as to how the films of the past could thrive today.

The Revamp will be back next month with just as intriguing

0 comments on “The Revamp #2 White Christmas”