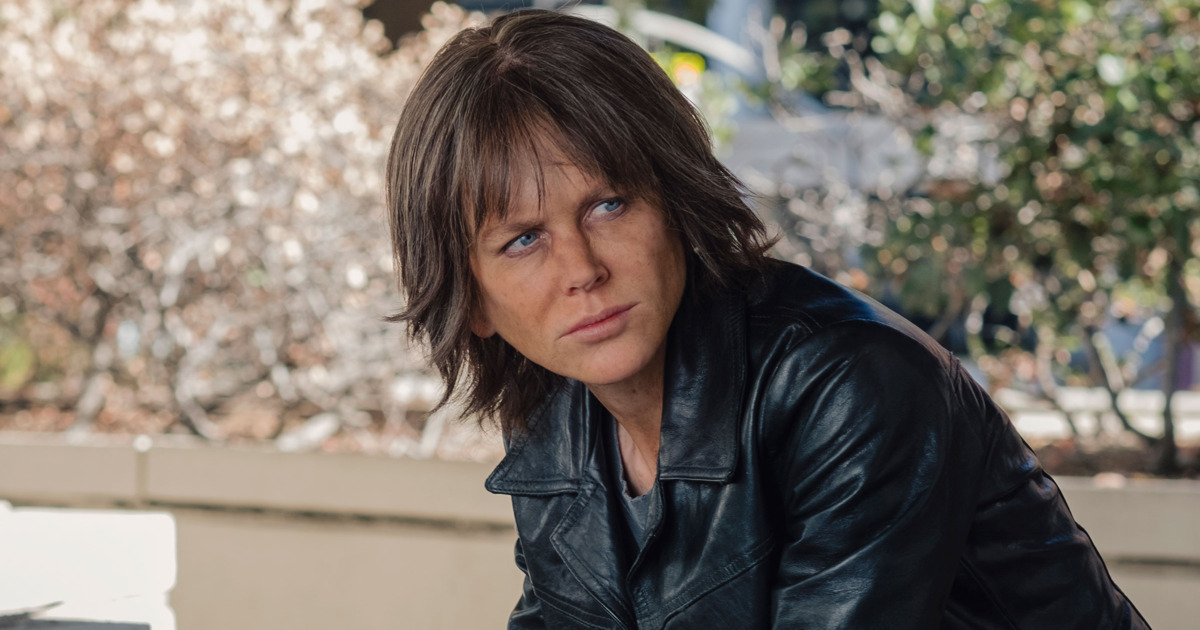 Kidman Delivers the Performance of Her Career in Gritty Crime Film

LAPD Detective Erin Bell (Nicole Kidman) moves like a cross between a zombie and a marionette that’s missing a few strings. She staggers and shuffles her way from the station house to the seedy flophouses where meth tweakers and armed robbers get high and plan their crimes. At first glance, she appears intoxicated, swaying on her feet from knocking back a few too many.

But, the sharpness in her eyes dispels that thought. Her malaise runs deeper than drunkenness. She certainly drinks too much, but that’s the symptom, not the disease. Years of moral compromises are rotting her from the inside out, and she’s nearing her physical and psychological limits.

In the opening scenes of Destroyer, a new crime film from director Karyn Kusama (The Invitation), Bell finds herself standing over a dead body lying by a storm culvert. She notices a tattoo on the victim’s neck, and a silent realization darts across her face. It’s not her case, but we sense that she knows a whole lot more than the two detectives in charge. When they ask for her input, she shoots them a bird and staggers away from the crime scene.

As a rookie cop, Bell was given a dangerous undercover assignment. The audience knows something went wrong and people died. The details are revealed as the film unfolds. It’s far enough in the past that her colleagues don’t mention it. She isn’t a pariah within the department. All appears to be forgiven. Although Bell certainly hasn’t forgotten. She blames herself for what went down, and the audience doesn’t know if her guilt is well-deserved until the third act of the film.

Detective Bell has a partner she’s avoiding and a teen-aged daughter who’s dating a lowlife in his 20’s. Bell’s the kind of mother who confronts her daughter about being in a bar underage while she’s half-plastered herself. It seems pretty clear that Bell is a failure as a cop and as a parent. When we learn there’s a link between the murder victim and her undercover op from yesteryear, it’s uncertain if Bell is looking for redemption … or revenge.

The film sinks or swims on the back of Nicole Kidman, and she delivers a powerhouse of a performance. In the past, I always found Kidman’s work to be emotionally distant, a bit frosty and off-putting. I rarely saw into the depths of her character. Something about her work kept the audience at arm’s length. It always felt like I was watching a performance.

Her work in Destroyer, on the other hand, is a master class in nuance. She avoids the “bigness” that is often inherent in roles like this, allowing her eyes to convey more than any words on a page ever could. But when her fury rises to the surface, she is as fearsome as any of her male counterparts (just ask the sleazy accountant played by Bradley Whitford).

And that’s where Destroyer breaks new ground. We’ve seen the drunken rogue cop cliche played out by male actor after male actor until that vein has been strip-mined of all originality. Yet that overdone trope springs to life in the hands of a female protagonist. It’s an incredible rush to see a male uniform cop hanging back warily asking Bell for direction and seeing her stare down the barrel of an assault rifle when she tells him, “It’s gonna be a gunfight.” She’s an unflappable female Wyatt Earp headed into the OK Corral without a moment of hesitation, and Destroyer plays like its equal parts western and L.A. noir.

The best crime films find the current of humanity that runs beneath the surface of the action and the gritty atmosphere, and that’s where Destroyer delivers. The two timelines that are inter-cut throughout the film build suspense by craftily withholding important information until the final moments of the film, but the flashbacks can also be seen as Bell’s memories of her first big case when her entire career was still ahead of her, when the moral compromises required by the job had not yet taken their toll. She’s on a quest to find out how things went so wrong. She’s stumbling toward answers that she may wish she had left hidden. It’s a compelling journey that film fans shouldn’t miss.