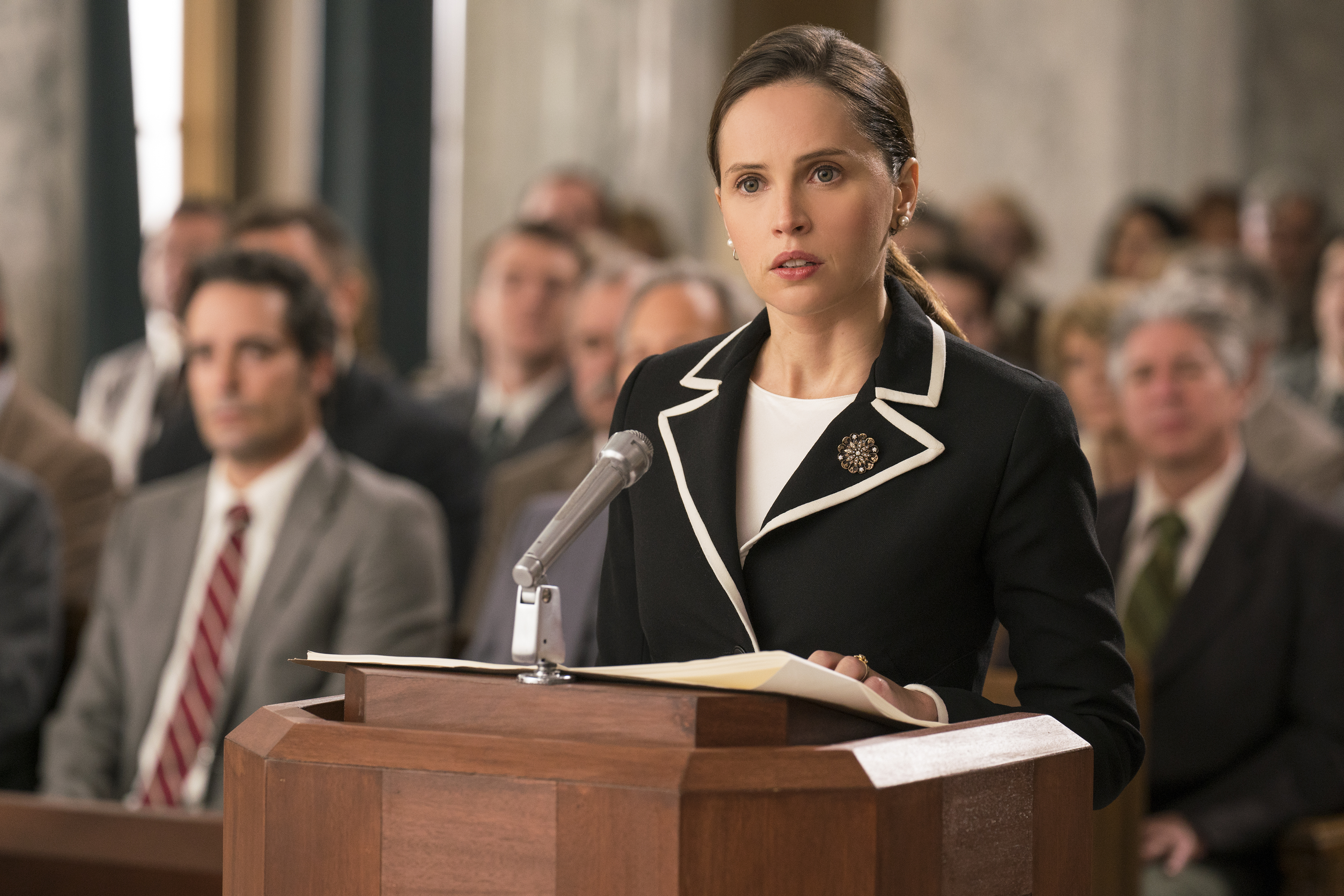 There is nothing wrong with a Classy Biopic. In fact, the Biopic appears to be a dying art. More Award Season fodder than Old Fashioned entertainment designed with mass appeal.  Enter Exhibit A for the jury; Mimi Leder’s On the Basis of Sex, a return to the kind of classy biopics of yesteryear.  Felicity Jones and Armie Hammer lead a solid cast backed by impeccable direction and a sharp script.

Biopics will oftentimes take the wrong approach to the life they are examining.  They often choose to cover a Subject’s entire life rather than a formative period of the Subject’s life.  A biopic of Ruth Bader-Ginsburg is a historical/current figure that one could have made that mistake with.  So much of her life both are filled with interesting history altering actions.

On the Basis of Sex rather chooses to focus on the time period that Ruth Ginsburg (Felicity Jones in a truly radiant and strong performance) was teaching Sexual Discrimination at Rutgers Law School and the case she fought with her husband Martin (Armie Hammer in full William Holden mode) regarding a Tax Code (specifically Tax Code 214, which allows for a deduction because you are a loved one’s primary caregiver, in 1973 it was implicitly stated for a woman caregiver and not a man).  One would not think this is a huge life altering deal but as Ginsburg points out this code which discriminates on the basis of sex could be a watershed moment for Discrimination laws.  Not only are the Ginsburgs aware but the powers that be in Washington are well aware in the form of Ruth’s former Harvard Dean turned Solicitor General Erwin Griswold (Sam Waterson in a great semi-villainous turn). The Ginsburgs with the help of the ACLU in the form of Mel Wulf (Justin Theroux in a mustache-centric performance) begin to ready for a battle that ends in the Tenth Circuit Court of Appeals.

Director Mimi Leder has crafted a good old fashion courtroom potboiler that eschews the troupes of the subgenre by focusing more on the buildup rather than the case itself.  Leder and screenwriter Daniel Stiepleman have crafted a story that is about the strength, fortitude, and sheer will of force it took Ginsburg to step foot into the courtroom.  At every turn, Ginsburg is cut off at the knees because she is a woman at a time when women were not lawyers or at least men thought they couldn’t be lawyers.

Leder has designed a movie that effortlessly tells this story without the soapbox moments that could stop the film dead in its track.  But that does not mean that the film is empty entertainment, quite the opposite.  The writer and director have found that perfect balance that allows us to see Ginsburg’s struggles as our own and feel those cutting moments.  Nothing ever feels forced in the film.  Like moments being shoehorned in to prove a point.

Though there are political statements made these are never laborious totem that the film falls under the weight of.  Rather On the Basis of Sex subverts and pushes its message through discretely and smartly through the guise of the courtroom potboiler conventions.  By using the convention of “speaking about the law” in moments of counsel the film is allowed to speak about the topic more freely without the burden of feeling like characters are speechifying.

If one is familiar with the life and times of Ruth Bader-Ginsburg they will invariably know how the film ends.  Like all great biopics, knowing the ending never takes away from the power of the film. The writing, performance, and direction are so good the ending is as thrilling and tension-filled as anything produced this year.  On the Basis of Sex is adroit timely entertainment at its best.