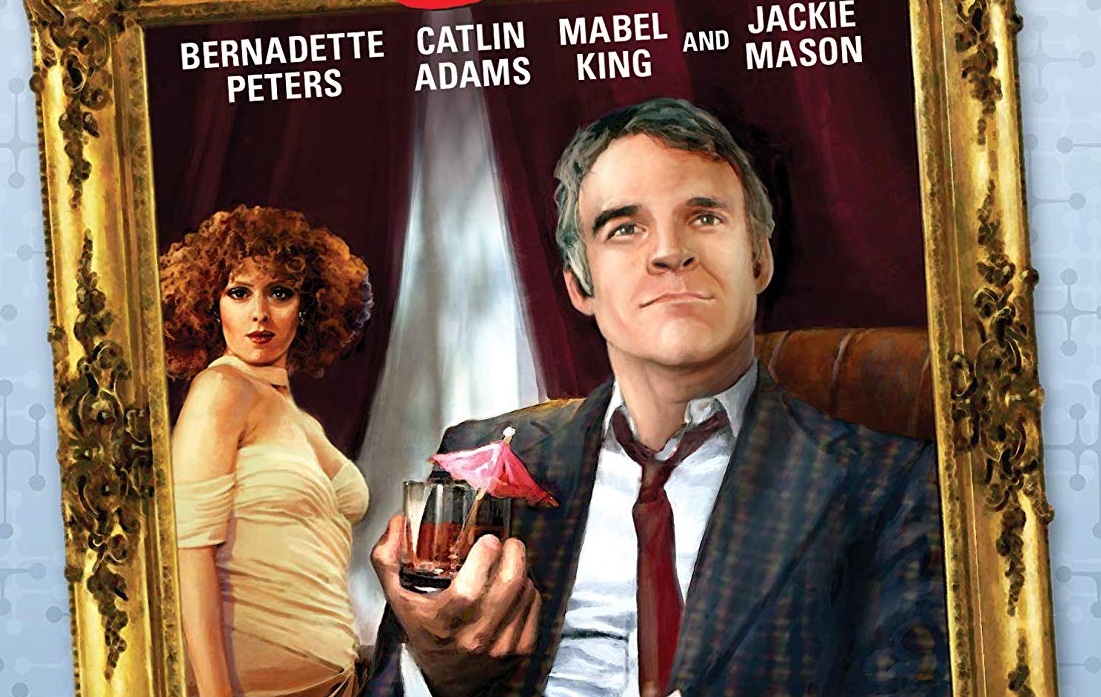 Adam finds the stupidity in Carl Reiner’s The Jerk still a brilliant sublime comedy that pushes the all the right buttons. The new Shout Select Blu-Ray features a beautiful transfer and cheeky fun extras.

The hardest type of character to write is one that is stupid.  There is a true art to writing someone who’s a true buffoon.  It’s a balancing act that few filmmakers have figured out.  The Coen Brothers and Paul Thomas Anderson are both that come to mind. For a time the duo of Carl Reiner and Steve Martin found the balance beginning with their first effort; The Jerk.

The Jerk is classless, tasteless, crass, stupid, and on the cusp of being racist. The Jerk is also hilarious minute-to-minute and pound-for-pound than any movie released in the era. The film centered by two truly magical comedic performances by Steve Martin and Bernadette Peters.  The film is the rise and fall of one Navin R.Johnson (Steve Martin) born a “poor black child”.  From hitchhiking to St. Lois to working for Harry Hartounian (a brilliant Jackie Mason) at Hartounian Gas Station to mistakenly inventing the Opti-Grab Navin moves through life with the type of simpleton point of view that Forrest Gump did.

Unlike that Oscar Winning picture, the core of The Jerk is actually a sweet and beautiful romance between Navin and Marie (a luminous Peters).  As crass and un-PC the picture is in moments its heart is in the right place an never finds room to be mean or mean-spirited.  The script by Martin and legendary screenwriters Carl Gottlieb (of Jaws fame) and Michael Elias (creator of the 80 classic sitcom Head of the Class) is sweeter than you would expect.  They always place the romance before anything.

Carl Reiner and Martin manage to be a truly dynamic comedic force as both understand one another’s strengths.  Like Scorsese and DeNiro or Spielberg and Ford, Reiner and Martin pushed each other in the best way.  Reiner here gives Martin space to not just be funny but be sweetly romantic, something that would mark his career in the best way.  In fact, the best parts of the film 40 years on are the moments of courtship between Navin and Marie.  As funny as The Jerk is, its Peters and Martin singing You Belong to Me on the beach as Martin plays the Ukulele that elevates this beyond the imitators of this film. Don’t go anywhere but directly to the source of comedy gold.  You may be offended but you certainly will be entertained and most importantly … you’ll laugh, laugh your ass off.

The new remastered from a Brand-New 2K Transfer that Shout Factory has acquired takes The Jerk from the murky world of VHS and DVD to the beautiful world of modern Hi-Def transfers.  The transfer retains the grain structure but sharpens the image and refines the color palette.  The Jerk has always suffered from the ugly transfer and prints that National Lampoon’s Animal House has suffered from.  Where Animal House was not only a product of the low-budget production it was also the intent of John Landis.  The Jerk’s old transfers and prints appear to have been a bit of a mistake as this transfer, though not a complete redux of the image definitely bring out a more astute sturdy more beautiful image.  Bravo to Shout and Universal for the work they’ve done here.

A Look Back at The Jerk with Steve Martin and Carl Reiner is a 27-minute interview with the star and director of the film. The interview itself has many fascinating production anecdotes; The film was designed to transistion Martin from standup to a Film career, this is why the film hues so closely to some of Martin’s standup bits.  The film was put in turnaround by Paramount, who had little faith in the film to allow Martin to have owner over the rights of the script and a short film he produced. In lieu of a commentary, which would have been amazing, this interview is the next best thing.

A Look Back at The Jerk with Carl Gottlieb and Michael Elias is a 24-minute interview with the legendary screenwriters. The two screenwriters dispense even more fascinating production bits like it was Jeffery Katzenberg and Michael Eisner were the Paramount Heads that put The Jerkin turnaround, a certain Oscar Winning Director almost directed the film, and Stanley Kubrick called the film one of his favorite films.  Again in lieu of a commentary this and the previous interview is a great alternative.

Learn How to Play “Tonight You Belong To Me” is a 7-minute how-to-play the iconic song that Steve Martin and Bernadette Peters sing in the film.  The how-to is the cheesiest web-based video is pretty fun and goes well with the aesthetic of The Jerk.

The Lost Film Strips of Father Carlos Las Vegas De Cordovais the complete 4-minute section of the film within the film where the infamous cat juggling moment.

The Jerk is an Instant Purchase for any of the Comedy Geeks out there.  Shout Select has done it again with a great transfer and meaningful extras that give a context and a bit of fun to the legacy of The Jerk. Recommended!!!