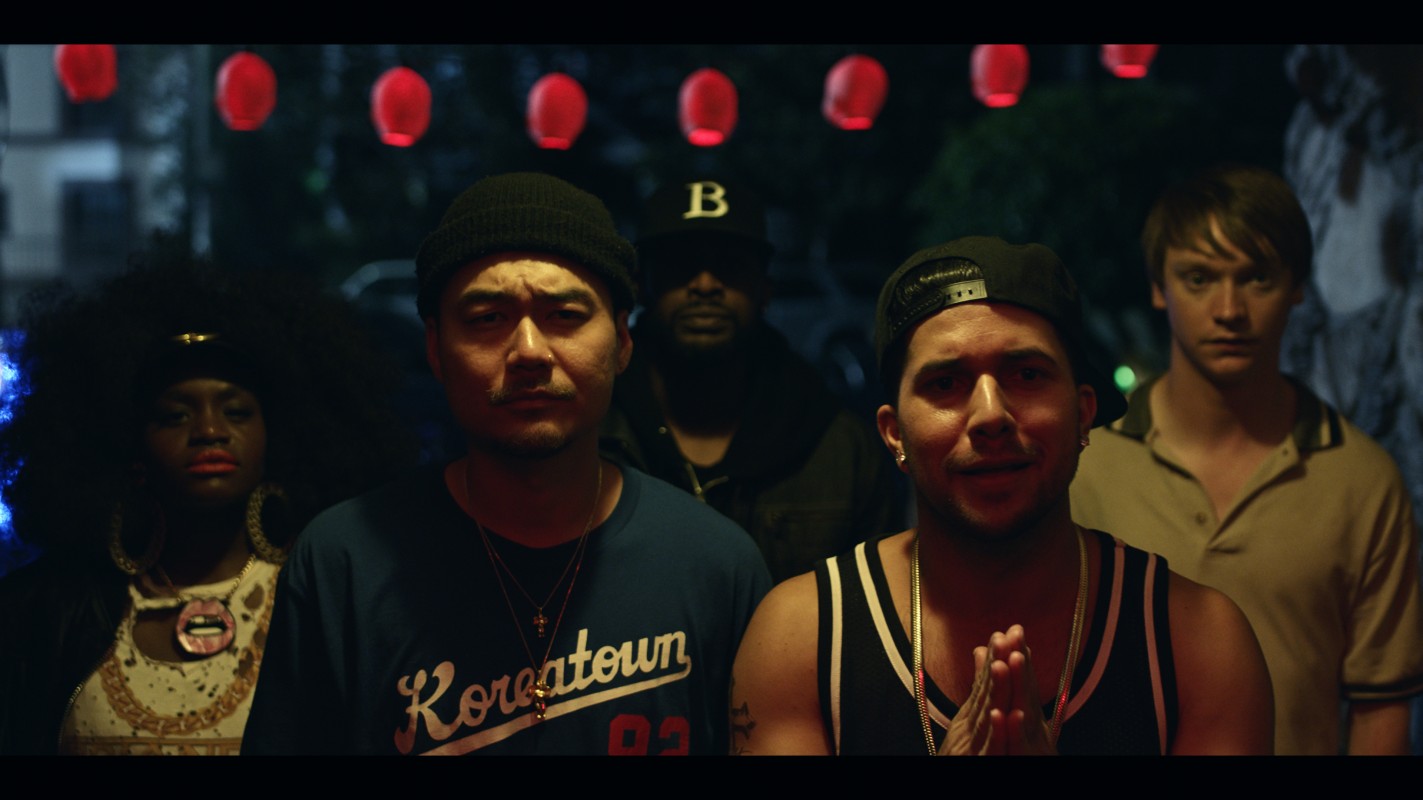 To call Joseph Kahn’s Bodied another “Rap Battle” movie is akin to calling Spielberg’s Raiders of the Lost Ark just another “Adventure” film.  Yes, to answer your question… Bodied is that good.  Kahn’s film aims at everything from White Privilege, College Pretension, Woke Culture, Conservatism, Liberalism, Racism, Sexism and Hip-Hop.  Kahn and writer Alex Larsen manages to hit every single target in their cross-hairs, eviscerating American culture with the precision of a laser.

Bodied is designed to offend as much as it is designed to make one laugh and cheer.  Blazing Saddles took White America to task in 1974.  Bodied does so in a very similar manner in 2017.  Kahn, nor anyone for that matter, could have made a film that is such a savage critique our culture without it being in this type of delivery system.  Like Blazing Saddles, Bodied works as a critique/commentary and as a conventional story within it’s genre.

The film finds Adam Merkin (Calum Worthy) attempting to write his PhD Thesis on the use of the N-Word in Rap music. An attempt to get help from Behn Grymm (Jackie Long), one of his favorite Battle Rappers, turns into a journey into the belly of the beast that is cultural appropriation.  Adam the red headed child of a revered College professor is the very definition of privilege and appropriation.  Kahn smartly uses Adam as a cipher for those in the audience that no nothing about Rap Battle culture or the Hip-Hop culture writ large.

Though the most subversive aspect of Bodied is it sees Adam for what he is; a tourist thinking that he’s earned the right to do what he wants because he’s seen 8 Mile and read a few books. Many will choose to view Bodied as a great rise-fall-rise Rap music story.  The film can be taken at face value but so much of the delight is in Kahn’s ability to layer so much meaning and criticism towards our current culture and boys like Adam.  Stifled in their own existence and feeling as though their struggles match those of someone who wasn’t fortunately enough to be born White and Middle Class. The “in plain sight” way that Bodied is able to play with this is as subversive as anything directed by Douglas Sirk.

Bodied is a middle finger aimed Adam, those like him and beyond.  If you don’t like Bodied because it hits too close to home, then it is doing its job.  And if you don’t like it, Bodied has a four letter word for you too.  The film is not interested in letting anyone off the hook.  Even its characters are judged and harshly so, as is the nature of a Rap Battle; go after your opponent without mercy or regard.

The film ends in a crowd pleasing go-for-broke third act that many will cheer for and many will not understand.  Few will see the redemption of Behn Grymm, realizing who he is.  Fewer still will not see that Adam has learned nothing and has accepted his fate.  These sentiments Kahn and Larsen place boldly in a simple exchange between Grymm and Adam.  It stands defiantly angry at people like Adam who have taken power away from a culture that gives an outlet to Grymm and others as much as it is angered by Rap Battling itself.  Bodied for all of its style (which it has tons to spare) is a direct clear bold statement about our current climate and culture.  If you don’t like it… Bodied could care less.

Bodied is out now in Theaters and VOD

Note: This review previously appeared on FilmDispenser.com for Coverage for AFI 2017