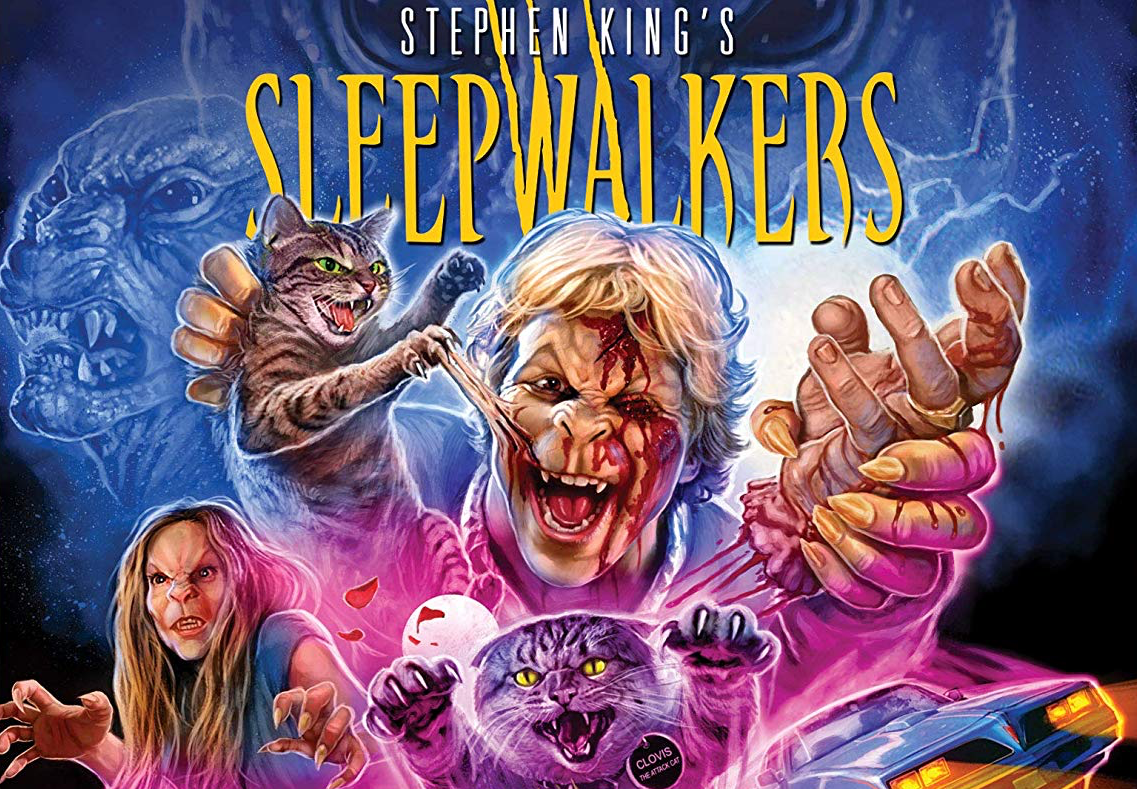 Sleepwalkers is the type of 1950s inspired Drive-In by way of Douglas Sirk cinema we rarely get anymore… if we even got it in the 50’s or 90’s.  The Movie new to Blu-Ray from the fine folks at Scream Factory is overstuffed with special features.

We know the adage; not all Stephen King Film Properties are created equal.  Some are truly transcendent, see The Shining, IT, Misery, The Mist, The Dead Zone, Gerald’s Game, Cujo. Others are terrible, see Thinner, The Dark Tower, Secret Window, Dream Catcher and on and on and on.  Sleepwalkers lays somewhere in the middle.  Highly entertaining, unwieldy, gross, funny, and perverted.  Everything you’d expect from a screenplay written by King himself.

As the title suggests King has decided to tackle the ancient Native American myth of the Skinwalker now called Sleepwalker.  So, much a mystery at the time they place a Pulp Fiction-esque title card at the beginning of the film to inform one of what a Sleepwalker is. Charles (Brian Krause) and Mary (Alice Krige) are an incestuous pair of Sleepwalkers.  Mother Mary weaken by centuries of life must feed on a virgin’s soul to continue to live.  Son Charles is her lover/caretaker finding said virginal souls for her consumption. Their target Tanya Robertson, not the star of Sheena and The Beastmaster, but a sweet, kind, virginal high schooler. Tanya (Mädchen Amick) quickly realizes this new boy in town is not what he seems and crazed cat-based mayhem ensues.

Director Mick Garris understands this story is on par with the kind of films that Douglas Sirk specialized in; overwrought melodrama.  Sleepwalkers for all its effects, gore, perverse sex and cat attacks is a high-strung melodrama.  King who wrote the script cleverly uses the Sirk style framework of a “new family” coming into town subject to rumors and gossip to cleverly create a horror film around.  The film goes as far as to have its entire soundtrack consist of 50’s pop tunes, era-appropriate for Sirk’s heyday.

Alice Krige is the film’s MVP as Mary the aging mother who only wants to protect and “love” her son, as they are the last of their kind.  The actress is so locked into the vibe of the film, one would mistake her work as almost arched if they were not aware of how amazing and strong of a performer Krige is.  Both Amick and Krause do solid work here, with Krause given at bit more to do.  Unfortunately, Amick who was cast hot on the heels of Twin Peaks is given the typical Scream Queen role, which is too well… scream. Garris always a fan of horror director cameos put together a scene that collects almost every influential horror icon/director of the time.  See if you can count them out.

Sleepwalkers is great 50’s Drive-In and Douglas Sirk inspired fun.  One would think these two strange bedfellows wouldn’t work but Garris finds the perfect tone for the entire proceedings.  It does help there is an ungodly amount of Cat’s fighting Sleepwalkers, that alone is worthy of the price of admission.

Scream Factory has been provided a newer 2K transfer from Sony Entertainment.  The transfer they received is beautiful and almost flawless.  There isn’t much if any pieces of dirt or scratches present on the print (unfortunately, not a lot of information was given about the transfer’s source) they used to create the transfer.  The image is pleasing with beautiful color reproduction.  The image is a little soft but that is by design (as I reviewed my DVD copy of the film and it appears to be the same softer focused image).

The newly recorded Commentary with Garris, Amick, and Krause is a jovial affair with all three participants having a great time discussing a film they are all proud of.  Garris discusses technical aspects of the film from the CGI work done, the script by King, the production itself.  Amick and Krause make sure that it’s a fun time as they’re constantly joking and joshing Garris into a looser mood.  Plus a great Spielberg story.  Well worth a listen.

Feline Trouble with Mick Garris is an 18-minute interview with the director. He discusses his losing the job and then getting the job after another director basically screwed up the project. As it was his first studio film he discusses the problems inherent within. The collaboration with the cast especially Alice Krige. Sparks aka Clovis the attack cat which Garris dubs “The DeNiro of Cat actors”. The critical response and the box office success.

When Charles met Tanya a Conversation With stars Mädchen Amick and BrainKrause is a 15-minute interview with the stars. It’s a jovial fun sit down with the actors where they discuss among other things how they read the script, how they came about to the film, how Amick took things so seriously, the amount of screaming she did, how much time Krause spent in the makeup chair, his approach to the character, the funnier parts of the script, how Krause was arrested for a parking ticket and missed the opening weekend,

Mother and More an interview with Alice Krige is a 16-minute interview with the actress. She discusses her work in the film, her prep, working with Garris and some production anecdotes.

Creatures and Cats: The FX of Sleepwalkers is a 16-minute featurette about the making of the various special effects with Tony Gardener the Special Make-Up effects supervisor, Mike Smithson prosthetic design & sculpting discusses the nuts and bolts of the effects work needed. There is a lot of great BTS video footage of the Effects work being created and worked on set.
Behind the scenes footage is 7-minutes of b-roll footage. This is solid gold as it gives you a glimpse of how they actually accomplished the physical effect work. Any horror fan or effects geek will want to divide into this feature as it’s filled with great content.

Rounding out the special features are the Theatrical Trailer, TV Spots, and BTS Photos. All three are worth taking a look at. Especially the Trailer and TV Spots for anyone that love 90s trailers.

Scream Factory hits it out of the park with its release of Sleepwalkers.  The Blu-Ray is packed with special features, a great audio commentary, and a sharp transfer.  RECOMMENDED!!!

Scream Factory’s Blu-Ray of Sleepwalkers is out now