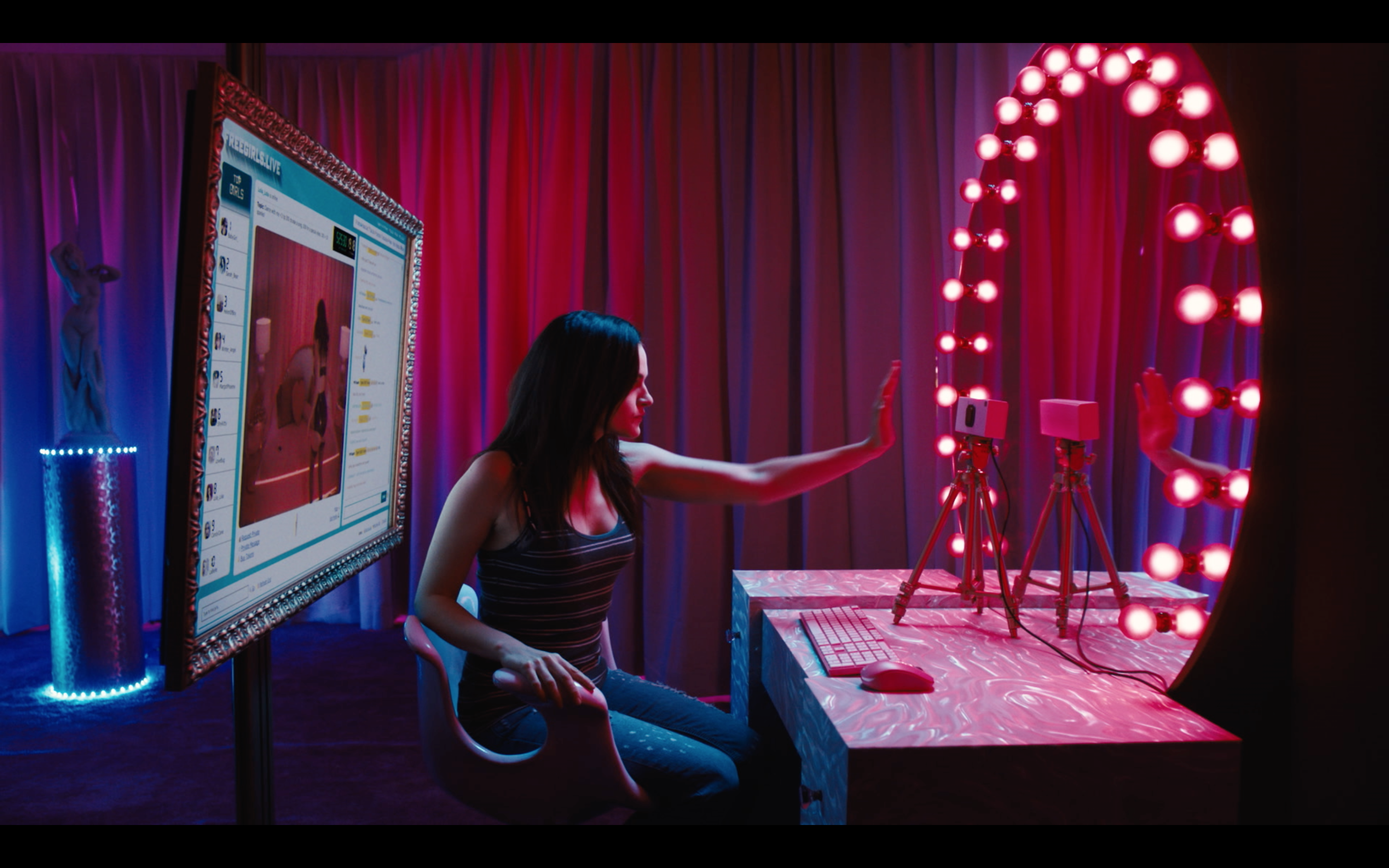 CAM is a highly effective mix of horror-thriller and social commentary on our views about on Sex Workers.  The Film played at the AFI Film Festival 2018’s Midnight section.

Part social commentary, part horror-thriller CAM is the type of film we see less often than we should.  Sharp genre filmmaking that’s more socially aware than your average film.  CAM’s adroit mixture of a horror-thriller and social commentary gives us a fresh take on some older genre conventions.  The result is a smart film that has more on its mind than scares and a sustained sense of unease (which coincidentally it does in ample amounts).  Writer Isa Mazzei and director Daniel Goldhaber create a debut feature that will surprise many with its sensitivity and clever conceit.

Alice (Madeline Brewer) makes a good living as a Cam Girl (e.g. a woman/man who livestreams with other men and women sometimes sexual, sometimes not, all from the privacy of their home or space they rent). Alice’s created a persona, Lola, and some simple rules that keep her safe.  Alice has like any young enterprising mind worked hard and continues to work hard trying to move up the economic latter.  The equation is simple; the people that tune into her station, the more money she makes, the further she moves up the popularity rankings on the site that she livestreams from.  It is at this apex moment, Alice’s profile, e.g. her livelihood, is stolen.  As Alice attempts to investigate, she finds that something insidious, something sinister is at play beyond a cast of stolen identity. But what exactly?  That mystery is at the core of CAM.

CAM is not your average horror-thriller. Director Goldharber and Writer Mazzei using Mazzei’s experiences as a Cam Girl as a diving off point create a film that feels true and lived in.  There is a sense of verisimilitude they imbue in the film.  That grounds the film in an emotional truth that goes beyond genre conventions.  The film spends time with Alice, very specifically not judging her, allowing us to see the world she lives in.

Though this isn’t a drama there is an acute awareness of character and wanting to show us Alice, her life, and her personal relationships.  By the time Alice’s life begins to unravel before her, we honestly care about her and her livelihood.  She’s a human and not a set of plot contrivances and dialog.  There is a very real moment in the middle of the film, nothing to do with the horror but just a very real moment where Alice is doxxed.  Brewer is given the space at this moment to play the moment.  It’s electric.

Those moments make CAM a not so ordinary horror-thriller.  The film in its third act as it central mystery unfolds CAM blossoms into a truly scary and stomach-turning horror film.  It’s that investment in character that Mazzei’s script favors make the climax all the more engrossing and frightening.  It’s the uncompromising ending that is CAM’s boldest statement.  It is also what separates it from many of its counterparts.