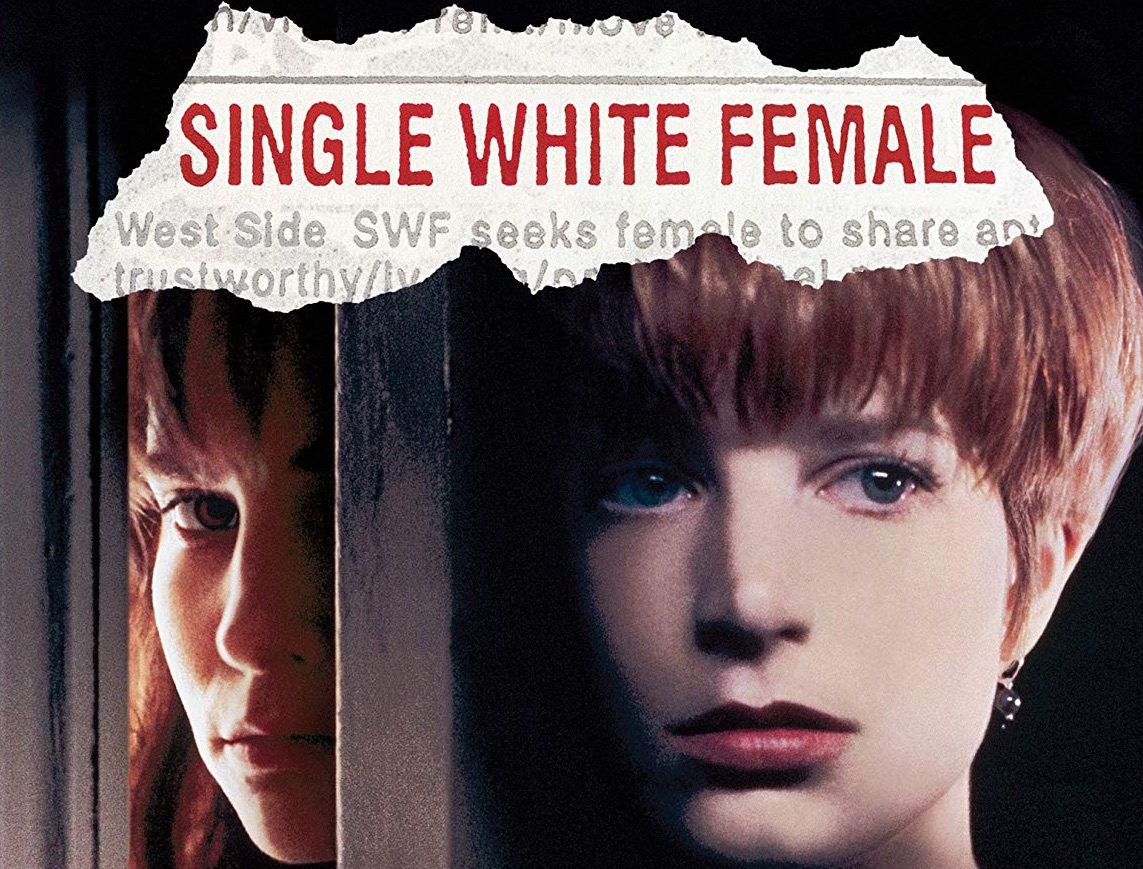 In the 1990’s you couldn’t throw a stick without hitting a psychosexual thriller.  Much like the slasher film of the 1980’s, this specific subgenre thrived for a little more than a decade.  Beginning with a germination of the subgenre with Body Heat in the early 80’s developing into a fully formed genre with the release of 1987’s Fatal Attraction.  Like Jamie Lee Curtis, Michael Douglas embodied the genre as its shining star of this specific subgenre.  Douglas’ career charted the rise and fall of the psychosexual thriller.  Douglas began it in 1987 with Fatal Attraction, refined it to perfection in 1992 with Basic Instinct and finally falling under its own weight with 1996’s Disclosure.  In the midst of this decade-long Golden Age in 1994, we had one of the very best in Single White Female.

A bit of a twist on the conventions of the genre has Bridget Fonda’s Allie pitted against roommate turned psychopath Hedy played by Jennifer Jason Leigh.  Allie after a terrible breakup with Sam (Steven Weber) reaches out to find a roommate.  Of course, master manipulator Hedy is able to worm her way into Allie’s lux-y Rent Controlled Apartment without any issue.  This is where all the issues start.  Hedy slowly puts herself into every aspect of Allie’s life with various sorts of tricks and mind games.  It is only a matter of time until Hedy cracks.  She does, oh does she ever.

Part of the success is in Don Roos’ adroit witty script that understands these conventions better than even the best of the genre.  The script gives Allie and Hedy their room to be fully fleshed out characters.  It isn’t as simple as Hedy is some crazy bunny boiling sex pot, there is a reason for her trauma and what she does.  Allie isn’t just the bastion of good, righteous, and brave, she makes decisions that push the situation.  It’s a fascinating tango that Roos creates.

In the 90’s you could not have gotten better a duo than Bridget Fonda and Jennifer Jason Leigh as women that will eventually have to come face to face against one another.  Leigh as Hedy is given that room to be that over-the-top grandness and theatricality her roles can sometimes have.  Fonda as Allie plays to her strengths as a sensitive and earnest woman who just want to do right by everyone.  The film beautifully charts their friendship and descent into darkness that allows both women to have their moments to shine.

Continuing on his amazing run of narrative films (which began with Barfly and ended with Desperate Measures) director Barbet Schroeder creates a film that is mature, methodical, brazen, and ultimately the right kind of delirious to allow for maximum amount of fun.  Thrillers of these kinds can laborious ventures of sex scenes connected by a hackney story, but Schroeder shows a true knack giving life to Roos’ script.

Single White Female is the real deal.  A truly great psychosexual thriller with more on its mind than just excuses to show naked bodies thrusting.

The transfer that was provided to Scream Factory by Sony Entertainment is beautiful.  It appears to be the most recent 2K remaster for VOD and European releases.  The transfer shows off the beautiful photography by Luciano Tovoli (who worked with greats like Antonioni, Argento, and Taymor) which works in extremes of Sun-soaked New York Summer Days and the Blue hued New York Summer Nights.  The image is crisp and color reproduction is perfect.  There is the lightest touch of grain structure that works to make the Blu-Ray feel more like a 35mm print.  Bravo to Scream Factory ensuring that the film looked great.

The commentary with Schroeder, Editor Lee Percy, and Associate producer Susan Hoffman is a solid informative track. Schroeder, Percy, and Hoffman are in an entertaining mode dispensing nuts and bolts filmmaking information, storytelling, and various interesting anecdotes from the production.  Schroeder is the clear leader, the director is a fascinating conversationalist as he discusses his theories on film, his work here and how involved it was for him.  It’s well worth a listen.

New York interview with Barbet Schroeder is a 27-minute interview where the director discusses working within the studio system.  The director discusses his career (a word he says he dislikes) and how much love and affection he has of “B-Pictures”.  Schroeder discusses his wanting to direct Single White Female because of being nominated for Best Director (for Reversal of Fortune). He name drops Hitchcock, Nicholas Ray, Sam Fuller as heroes and also directors that did not win Oscars.  It’s the starting off point for a fascinating interview with the director that discusses in detail his process.  Script, Photography, Casting, Costume Design, and Editing is all discussed in detail by Schroeder.  Schroeder even discusses the problems with the MPAA and his director’s cut (which is the final theatrical release) though much had been cut which he discusses.  It’s a great sit-down interview because of Schroeder’s passion for filmmaking and the work he’s done here.

Upstairs with Graham Knox is a 7-minute interview with Peter Friedman. Friedman talks about the stunt work and prep needed to do the role which is a physically taxing role.

The Fiancé Sam Rawson is a 20-minute interview with Steven Weber discussing the work and Barbet Schroeder as a director.  It’s an interesting interview with Weber deep diving into the character that is a lot more complex than this style of character is.  The actor does not shy away from the sex scene and discusses it with intelligence. The best reveal is that Weber is a bit of a cinephile as he discusses Argento (and proud of working with him), Bergman, and Hitchcock.  Again, a fascinating interview.

SWF seeks Writer is a 25-minute interview with screenwriter Don Roos. Roos is a fun interview that discusses how he came to adapt the novel that the film is based on.  His discussion of how he developed the story and how he related to the story, which will surprise some.

Single White Female is a great film that finally gets a great Hi-Def release on Blu-Ray.  Scream Factory has produced a wealth of great features.  Highest Recommendation!!!