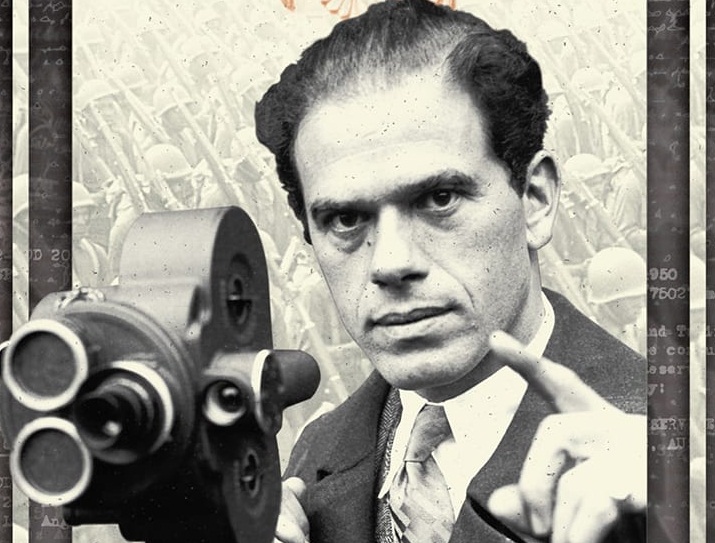 Adam reviews Olive Film’s new set Mr. Capra Goes to War. This vital Blu-Ray set collects all the Propaganda Documentaries produced by one of the best of the Golden Age of Hollywood, Frank Capra.

Capra’s first entry into the Why We Fight series of propaganda films is the kind of film that is the very definition of propaganda with Evil truly being Evil.  The film details the reasons why the US was fighting against Italy, Japan, and the worst of them all Germany.  Like all films of this ilk, there is a bluntness and inherent racism to the proceedings.  And like the best of all propaganda films, there is a skill at play here that’s clear in the most jarring way.  It effectively does what it is set out to do, never let a soldier or U.S. citizen during this era who the enemy was.

The two parts totaling about 72-minutes is arguably one of the greatest war documents of all time.  Using footage shot by Anatole Litvak and working in tandem with Capra as co-director, the film is a starling and oftentimes stark account of the Russian’s fight for their country at the hands of the Nazi invading horde.  This is arguably the best of the Why We Fight series in the set because though there is a slant and the propaganda machine is in full swing this shows us the war we rarely see.  The casualties of what war can do to a country, the slaughter, the desolation, the land, the cities all decimated.  Yes, it was used to raise the ire of men and women of the United States but it is left as a reminder of it costs a country when it goes to war.

The most unforgivable of the Why We Fight propaganda films as it blatantly lies and obscures the truth for Black Soldier and what they had in store for them in the United States Armed Forces.  Produced by Capra this one may have been directed by the man who was known for his portraits of American individualism and heroism.  It is on full display here.  Showing men and women being treated with respect, not in any way the way they were treated by both sides of the war.  Still a fascinating, if enraging piece of misguided disgusting ad prop.

The most interesting of the Why We Fight films because most of its running time is devoted to war footage that was staged.   Tunisian Victory represents a huge victory for the British, French, and Americans.  The piece was created to show those at home the how’s and why’s of the Northern African theater and their win over the Axis.  The reason why most of the war footage was staged was that the real footage shot by John Houston, and Anatole Litvak sank to the bottom of the Mediterranean Sea.  What we do get is blips of amazing real footage smashed against the footage recreated thousands of miles away.  If anything this is a preview of the infotainment documentary that relied heavily on “recreated scenes” that would eventually return respectable with Errol Morris’ Thin Blue Line.  The piece does a very good job (much like The Battle of Russia) of setting up the war and what had occurred that caused the decisive victory.  The Battle of Russia, it includes animated segments produced by Walt Disney.

Your Job in Germany

Five years ago this 13-minute piece of paranoid mania, written by Dr. Seuss no less, would have been laughed off as such.  Unfortunately, this is 2018, and could literally serve as a “How To” guide for dealing with the Nazi and Fascists issues we’re dealing with in America.  In fact, most of the running time a viewer will be not just stunned by just how concerned America was with the rising of another Nazi threat in Post-WWII Germany but how America has failed so miserably in the last two years.  Enter this one at your own risk as it could cause anxiety to be a trigger in our current Political Climate.

Olive Films has not done any sort of restoration on these documentaries.  They come as they are warts and all.  The transfers are good solid Hi-Def master, the sources are terrible.  Per the expectation with wartime footage dirt, scratches, blemishes are littered through every single one of these documentaries.  Once one becomes accustomed to the nature of the footage it becomes an almost tactile

Each film is presented with an introduction by James McBride author and film history.  His introductions are always helpful in giving context as to why these specific pieces of propaganda were produced by the War Department, Capra’s involvement, and their reception by Soldiers and the American Public (when they were designed to be shown to the public).  I strongly suggest viewing these with the films.

Frank Capra: Why We Fight a 35-minute sit-down interview with McBride discussing Capra’s time in the military, the documentaries he produced, and how this played out during his post-WWII career.  It’s a great albeit dry featurette with plenty of behind-the-scenes photos and clips.

Olive Films’ has gone the extra mile in ensuring that this insightful Documentary/Propaganda footage is available in one package.  Mr. Capra Goes to War: Frank Capra’s WWII Documentaries is essential viewing for any History Buff or Major Cineaste.  Recommended!!!