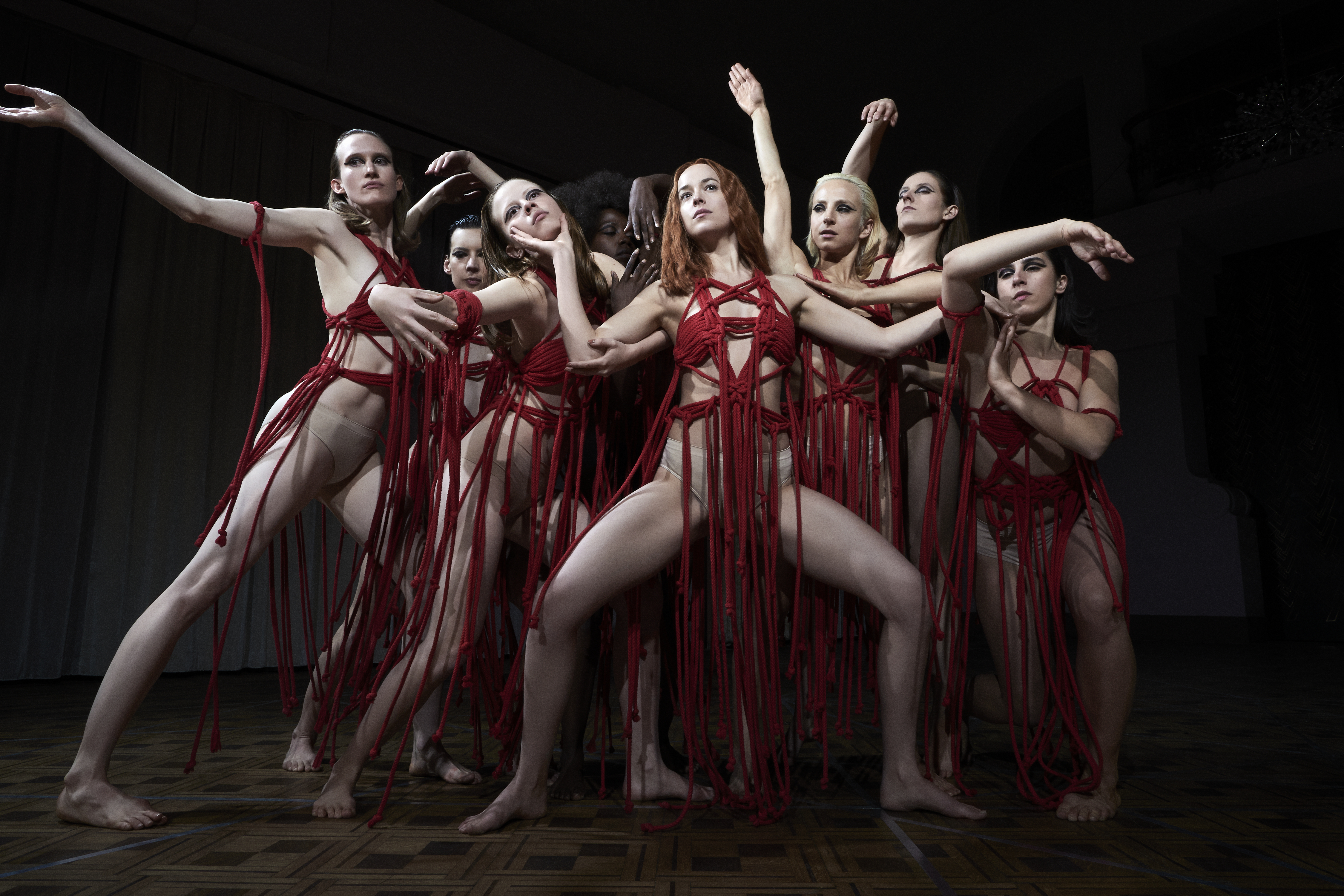 The remake of the Giallo Classic confounds, scares, and ultimately delights in this sublime reworking that takes more from 70’s German New Wave and the work of Nicolas Roeg than Italian Genre Films.

The remake of Dario Argento classic horror film will incense die-hard fans as much as it will create new rabid fans unaware of the original.  Not a straight-ahead remake, nor a completely top to bottom re-envisioning.  Director Luca Guadagnino has created a powerful dynamic paradigm shift from standard nightmarish horror film to a film about women in power and the dynamics, struggles, and fears they have of power either perceived or manifested in other women.

One only need know the barest of story threads going into the film.  Susie Bannon (Dakota Johnson) has come to Berlin to audition for the Markos Dance Academy.  Susie is accepted into the Academy in what seems like a random stroke of luck, but it is anything but.  Something much more insidious has begun to take shape at this very old Dance school.  A power shift within the school’s coven of witches but to what end does Susie and this power struggle have in common? Only Mother Suspiriorum and her second coming know for sure.

Those expecting a primary color saturated hallucinogenic walking nightmare from Guadagnino will be sadly disappointed.  This Suspiria has only taken the barest of plot points and smartly discarded the rest.  Using only a ballet school run by a coven of witches the film allows itself to go deeper into the dynamics of the women that run and perform at the school.  Suspiria 2018 is not interested in cheap scares rather an omnipresent feeling of anxiety and dread coming from the pressure to perform, the world outside the Ballet school, the world inside.

Most of the dramatic movement in the film is centered on Susie’s meteoric rise in the company and how it relates to the second coming of Mother Suspiriorum.  The film’s rehearsal scenes and dance scenes are played out masterfully with the importance and the intricate details of any affecting drama you will see here.  These scenes are not merely for ornate display; rather they are the power plays of a chess board.  These dance numbers are a literal stage at which the shifting of the power within the school and the coven is both overt text and subtext.

Complex textualizations like these can only work if the performers are pitch perfect both emotionally and physically.  Dakota Johnson and Tilda Swinton along with the entire cast find that perfect balance creating indelible performances.  Johnson as Susie is not what people would consider a “Final Girl” in what is not your prototypical horror film.  Her work simply put is powerful, gracefully physical, and ultimately a bravado daring performance.  Swinton playing dual roles is nothing short of fantastic as Madame Blanc and Jozef Klemperer.  As Madame Blanc, the director of the Academy, Swinton brings a quiet power to the role.  The actress playing Blanc as one who understands that a sharp look has more consequence than a raised voice.

Those expecting a Giallo style film will be disappointed as Suspiria 2018 has so much more to offer than merely scares.  What Guadagnino, Screenwriter David Kajganich, Cinematographer Sayombhu Mukdeeprom, Choreographer Damien Jalet, Composer Thom Yorke, and the Cast have created is a film about the power women hold and all of the complexities and dynamics within.  A special mention needs to be made of Jalet’s work as the Choreographer here.  The dance sequences are nothing short of spectacular.  His work informs on the story, moving it forward as it plays out rather than just being ornamental display.  They are as complex as the horror set pieces.

Luca Guadagnino has made a film more akin to the work of Rainer Werner Fassbinder, Wim Wenders, and Nicolas Roeg than Lucio Fulci or Dario Argento.  Much like those directors, especially Roeg, Guadagnino is more interested in the times in between the genre elements.  This is where Suspiria 2018 ultimately succeeds in remaking a Classic.  By shifting focus and creating a film that uses is genre trappings to discuss feminine power it redefines itself beyond the original.  By doing so he has created a film that is deeper, richer in subtext.  In a world of remakes with the artfulness of a sledgehammer Suspiria stands alone; artful, sharp, adroit, and perfectly conceived.