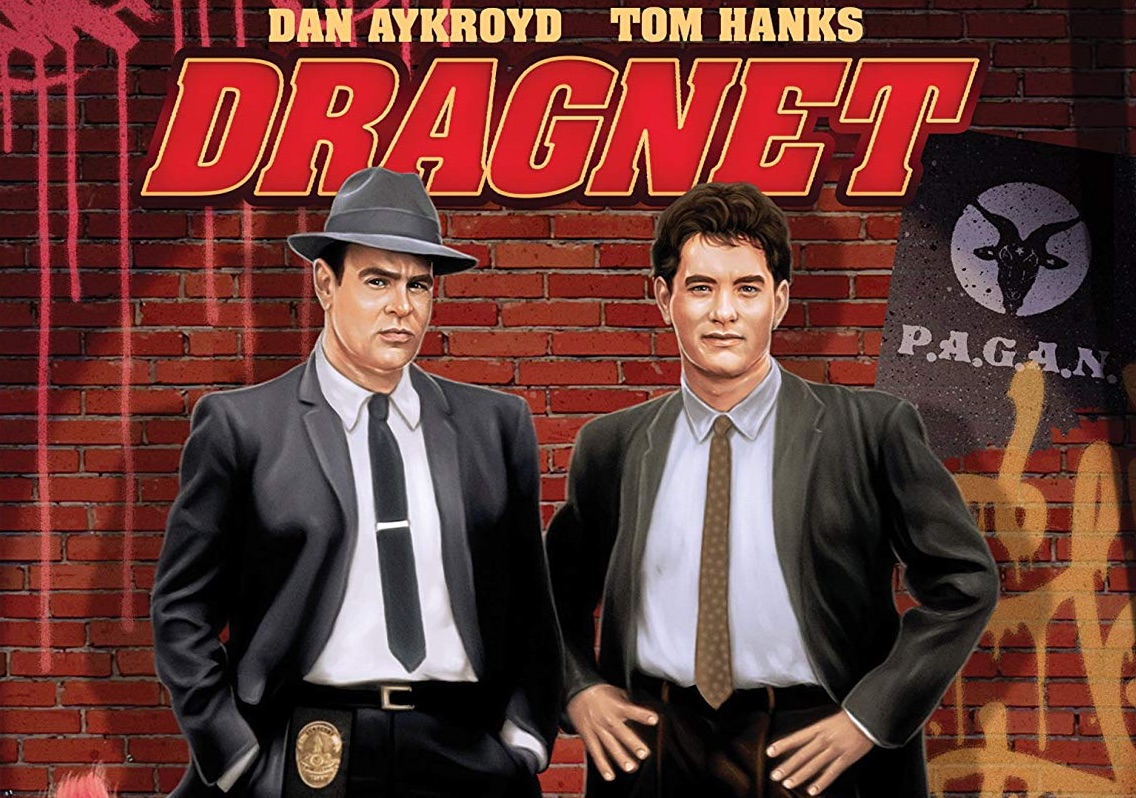 Adam takes just the facts about Dragnet.  The cult comedy starring Tom Hanks and Dan Aykroyd is being released by Shout Factory’s label Shout Select with a near perfect transfer and loaded with new special features.

Before The Brady Bunch, Land of the Lost, 21 Jump Street, Dark Shadows (trust me, this one is the one you’ve slept on), and 22 Jump Street there was Dragnet. A film that both lovingly adapts as it mocks its source material.  Tom Mankiewicz’s film may be the granddaddy of this subgenre of films which at their best is The Brady Bunch as their worst is Baywatch.  Dragnet skews on The Brady Bunch side of the very best the genre has to offer.

The film is not a remake rather a long in the tooth sequel with Aykroyd portraying the nephew of the series Joe Friday (Jack Webb). They go as far with this notion as to cast Harry Morgan as Bill Gannon, his character from the 60’s iteration of Dragnet, as now Captain Gannon.  The film adroitly toes the line between Meta-commentary on the entire genre and actual police procedural with more efficiently than other later era films that attempted to do the same thing.  Something that feels like the grandfather to 21 Jump Street which used this particular style and even going so far as to make itself a sequel like the Lord/Miller directed comedy.

Keeping the film’s comedic elements as deadpan as humanly possible the film keeps within the stylings 1950’s TV series docudrama.  While the approach is the same it produces two very different results.  Dragnet the film uses this for both comedic effect and sincerity in equal measure.  Mankiewicz’s directorial approach and script are in line with this to a tee.  The film’s style is further solidified by Hanks and Aykroyd’s tongue-in-cheek performances as Detectives Streebek and Friday.

Dragnet wither its taking down Hugh Hefner or Jerry Falwell with ripe satirized performances by Dabney Coleman and Christopher Plummer respectively, the film never loses its sense of fun and understanding of the troupe of the procedural thriller.  The film’s success is in that it works both as an action film (with some surprising and surprisingly funny bigger action beats) and a comedy.  Plus, it ends on one of the all-time great comedic beats.

Again Shout Factory has corrected what Universal never got right.  The original DVD release of Dragnet is in a word; horrible.  Shout Factory’s new remaster of the original film elements are done with care and the results are fabulous.  The film retains a slight sheen of grain but is more vibrant and sharper than initial releases of the film.

The commentary by Russell Dyball is a fun and informative track.  If you’ve listened to Dyball on previous tracks (see Saved by the Bell) then you’ll know that the track is well researched and full of great information.  Definite recommended listen to any Dragnet fan.

Just the Facts! is a 45-minute archival featurette done during the release of Dragnet.  No mere fluffy EPK, this is a full-on documentary about the history of Dragnet.  Narrated by Harry Morton and Hosted by Aykroyd and Hanks, this is one of those 80’s promotional TV Special Tie-In’s that they sadly don’t do anymore.  It’s a fascinating well researched thoughtful documentary with a huge dollop of silly (provided by a very game Aykroyd and Hanks).  Shout Factory continues to impress with their ability to get archival material that is not just informative and entertaining.

Rounding out the special features is a collection of Trailers and TV/Radio Promos.  Again Shout goes the extra mile by including what feels like every single trailer and promo spot that was ever produced for Dragnet.

Dragnet is one of the truly great, but forgotten, comedies of the 1980’s.  Shout Select has done right by it giving it a new Transfer and solid extras.  HIGHEST POSSIBLE RECOMMENDATIONS!!!