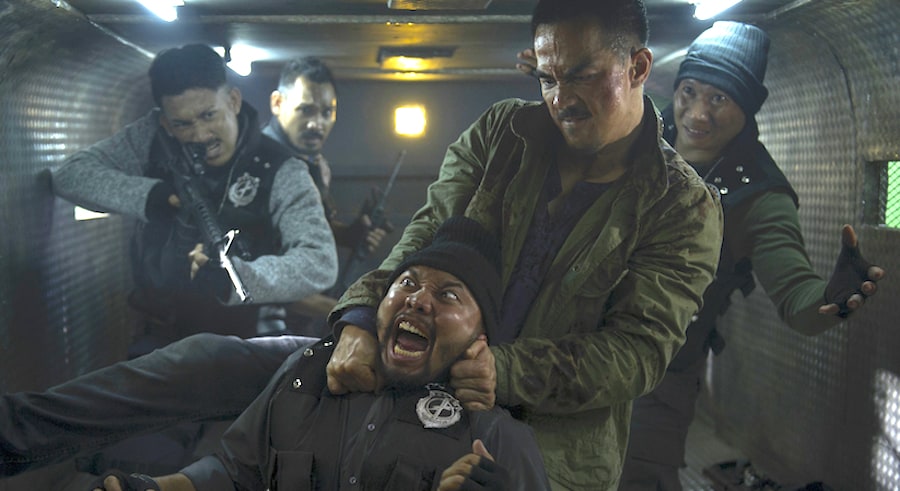 Director Timo Tjahjanto thrown down the gauntlet on all action filmmakers with The Night Comes for Us.  The over-the-top action film is lean on story but overflowing with action, emotions, characters, and gore… for the love of all that is holy the gore.

The Night Comes for Us isn’t just one of the great violent action films in the last 10 years. It’s the action equivalent of Evil Dead 2. A movie so ridiculously violent and inventive in its display of said violence that it is both awe-inspiring and hilarious to watch unfold. The key to the entire enterprise is that the film takes itself seriously.  Thus letting the audience decide how they will react to the Gran Guignol style arterials spray blood-soaked violence.  At the center is Writer/Director Timo Tjahjanto controlling every set piece and camera movement with the precision of a world-class filmmaker.

The leanest of plots has Ito (Joe Talsim), in a moment of humanity and conscious, saving a girl (Asha Kenyeri Bermudez). This small act sends ripples throughout the Triad that Ito works for.  Because of his position as one of the amoral group of elite mercenaries called Six Seas, Ito is targeted along with the girl he saved. Ito goes back home to Thailand and the force and violence of the Triad follow him and brings all that means down on everyone he loves.

The lack of plot is not a critique of the film, rather a compliment as it works in the its favor. Tjahjanto creates a set up that allows for the maximum amount of action, gore, and pathos.  The writer/director has created as much a homage to the heroic bloodshed film popularized by John Woo as he has created a film that’s Action based but spiked and influenced heavily by gore filled horror.  The film features sustained scenes of men, literally, shredding themselves to pieces with various sharp and blunt edged weapons.  Those that can see through the blood and large chunks of flesh just as a byproduct of the destruction on display and not gross-out gore will be treated to action set pieces that are balletic in a way that even the best Hollywood Musicals are not.

The operatic style of violence is only outmatched by the arched emotional storylines played throughout the film.  It is a homecoming for Ito and all that entails.  Tjahjanto’s script beautifully tells that homecoming and all the emotions that Ito and the tight-knit group of friends would have after a four-year absence.  It adroitly understands much like A Better Tomorrow that overflowing of emotions are not just an affectation of the genre but are necessary to allow the heightened blood-soaked action to feel apart of a cohesive whole.

The Night Comes for Us is an Action film.  It is not a PG-13 friendly adventure that’s tone down impact is on par with a group of kids playing in the backyard.  The film is designed to be ugly, gore-filled, offensively bloody, hard action film.  In that design, Tjahjanto has succeeded beyond anyone’s expectations.  By the film’s end, one will want to do two things.  One, rewatch the film again.  Two, see whatever Tjahjanto is doing next. Audiences will not have to wait long as Tjahjanto has May the Devil Take You ready for release in the next few months.

1 comment on “Film Review: The Night Comes For Us”