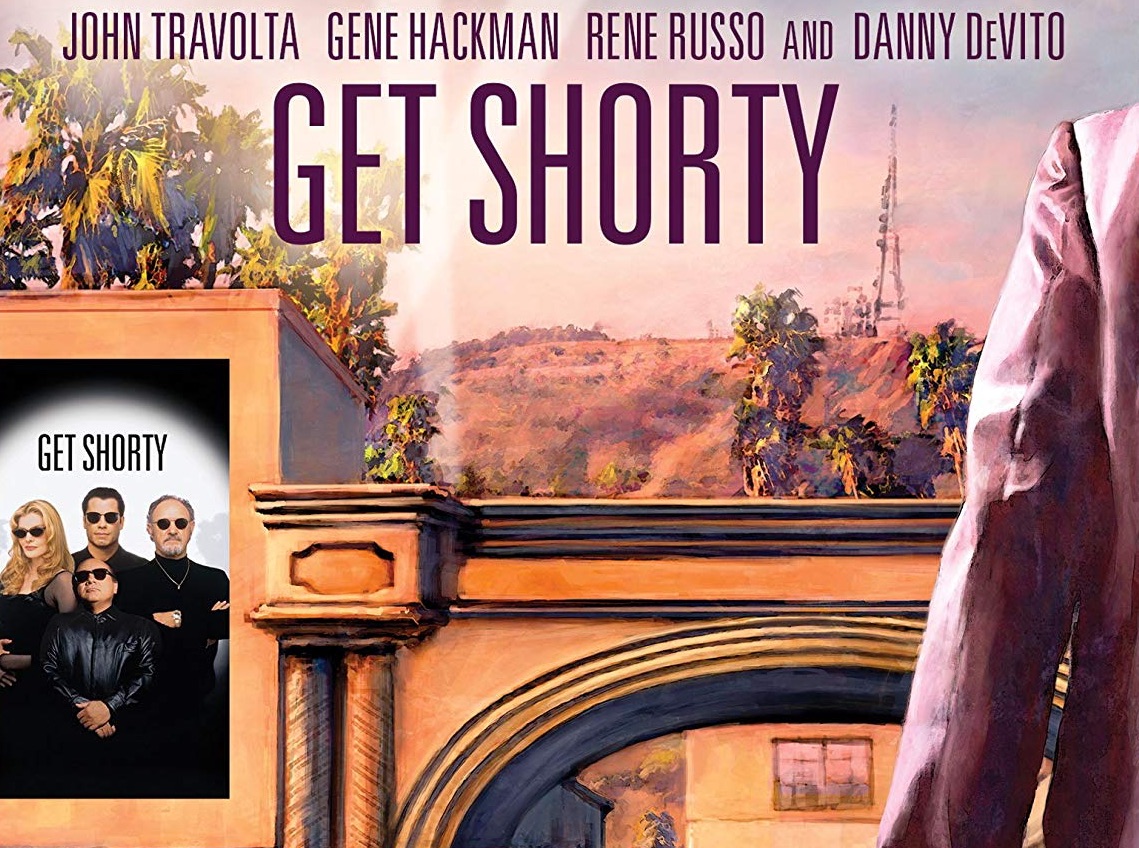 Adam takes a look Get Shorty one of very best of the 90’s Elmore Leonard Adaptations.  The film gets a loaded special edition from Shout Factory’s Shout Select Label.

They called him Dutch.  Why?  Who knows.  Dutch aka Elmore Leonard in his lifetime wrote about crime and criminals like no one else.  His rhythm and sense of dialog are beyond reproach.  The tales he spun were always tightly constructed but masked in a way that covered his tracks.  They were pop confections of the highest order.  Get Shorty, was one of the very best from his run in the early 1990’s that consisted of Maximum Bob, Rum Punch, Pronto, Riding the Rap, and ended with Out Of Sight.  They were so good and cinematic that all of them turned into a TV or Film property over the last twenty years.  Get Shorty was the first in this series of adaptations.

Crime, criminals, and Hollywood have always been a heady brew that many filmmakers are drawn to but few can accomplish with such style, humor, and wit in the way that Get Shorty does.  Bookie and smalltime mob operator Chili Palmer (John Travolta) through a series of incidents that are too humorous to ruin put him in the pocket of Ray Bones (Dennis Farina) his moronic nemesis. Needing to escape for a bit of “fresh air” and to chase down a debt that is owed comes to the bright lights and glamorous Los Angeles.  Chili finds more than he bargains as over the next week he becomes a producer, has to deal with Bones, get involved with a drug-dealing limo service owner (Delroy Lindo).  With all this Chili still has to worry about the money that he owes Ray Bones but don’t worry it all turns out for the best

Barry Sonnenfeld’s stylish direction combined with Scott Frank’s adroit adaptation make all the right moves to bring Get Shorty to life in a way that a Leonard book never had.  Both understood the combination of humor and violence that few directors and screenwriters understand about Leonard’s work.  Like the horror comedy, the balance is key but also in the understanding that comedy is comedy and the violence has consequences.  Get Shorty is fun when it needs to be fun but also serious when it needs to be serious.  That statement may not seem important but with real stakes involved in a crime story often times filmmakers forget one or the other.  Frank’s script understands this the way that Leonard’s work does.

The film is John Travolta’s film.  He owns the screen as Chili Palmer.  His gait, his smile, his speech all exudes a confidence that’s a true character and not Travolta playing Travolta.  This is his post-Pulp Fiction film and his shot at proving that he wasn’t just a fly-by-night success.  Chili Palmer in Travolta’s hands is a star performance of the highest order.  Travolta understands that this is his show, but never forces it to be a one-man show, rather gives his cast and co-stars the extra help to make the film that much better.

This supporting cast is incredible.  It’s a who’s who of stars, actors, and character actors.  When a film has James Gandolfini and Jon Gries as their last options you know a film is stacked.  The work he does with Gene Hackman, Rene Russo, Deroy Lindo, Dennis Farina, James Gandolfini is relaxed and polished in a way that you expect from these actors but that much better because Travolta’s acting is that much better. The best of the bunch are both Hackman and Russo.  Hackman has never been considered a comedic actor but here he’s comic gold as Harry Zimm a cheap schlock producer ala Roger Corman.  Russo’s part the type she specialized in throughout the 90’s but this time with a bit more sardonic wit and a superiority that makes this one of the best roles she had.  The supporting work done by Lindo, Farina, and Gandolfini is confident and bold as it needs to be.  Lindo and Farina make bold choices allowing their character’s to be essentially morons but never ever winking at the camera.

Get Shorty is one of the best crime comedies of the 1990’s for a reason.  It’s a truly wonderful script, directing and acting is leaps and bounds better than its contemporaries.  The film is still as biting, sharp as the day it was released.

Oscar Gold!  Yes, I had to go there.  This new edition is from a remastered from a new 4K Transfer.  The film’s LA and Miami locations and visuals pop in a way that the previous Blu-Ray and DVD have not.  The 4K transfer retains the beautiful colors that DOP Dan Peterman and director Barry Sonnenfeld shot the film with.  Overall it’s a stunning razor-sharp transfer that makes the film pop in a way that it just had not in previous home video iterations.

The commentary by Barry Sonnenfeld is from the initial Laserdisc release.  Sonnenfeld has a very dry self evading wit as he goes through his film.  More self-doubt mires the commentary as he discusses his work.  It is a great information filled track but one often wishes that Sonnenfeld would stop beating himself up for a film that’s honestly one of the best of his filmography.

Look at Me is 27-minutes behind the scenes making of featurette that covers the development and production of Get Shorty.  It features Elmore Leonard, Barry Sonnenfeld, John Travolta, Scott Frank, and Gene Hackman all discussing Leonard’s work as a novelist and how they came to the film and the film’s production.

Wiseguys and Dolls is a 20-minute companion piece to Look at Me and is about the Characters and the Actor that portray them.  Rene Russo, Danny DeVito, Rene Russo, Scott Frank, Denis Farina, Deroy Lindo, James Gandolfini all appear in interviews (Gandolfini appears via onset interview).

Going again! is an interesting 5-minute featurette with Barry Sonnenfeld and Danny DeVito talking about the directing.  Specifically, how DeVito, a fellow director, helped Sonnenfeld during his scenes by whenever he would flub a line rather than having them reset, he would just continue on.  It’s a fascinating look at much time is spent between camera takes or setup.

Get Shorty Party Reel is not your normal Gag Reel.  This 6-minute reel is essentially the time before the clapper begins the take or at the very end of a take.  It’s a great way to do something different with this type of feature which is always just people laughing after they screw up a line.

Page to Screen: Get Shorty is an 29-minute episode of the classic series that aired on Bravo. The Show Hosted by Peter Gallagher discusses the development of the script and the making of the movie from the point of view of adapting the Novel by Elmore Leonard. Some of the juicy bits from the episode you learn; Tristar the original Studio producing the film pulled the plug before production started. Barry Sonnenfeld wanted DeVito as Chili Palmer. Others considered for Palmer were Michael Keaton, Bruce Willis, DeNiro, and Dustin Hoffman. The show features interviews with Martin Amis, John Travolta, the real Chili Palmer, Scott Frank, Michael Siegel (Leonard’s Agent), Stacy Sher, Michael Shamberg, Fred Spector, Gene Hackman, and Quentin Tarantino.

Vignettes are a series of 6 vignettes totaling about 6-minutes total that feature Barry Sonnenfeld and Danny DeVito talking about the directing.

The Graveyard Scene is an 8-minute about a single deleted scene. Introduced by Barry Sonnenfeld, the single deleted scene is actually one of the rare occurrences where you would have loved to have in the film. For those that haven’t seen the scene, it features a very famous actor/director as a director of a low budget film Harry’s producing.

Shout Select’s edition of Get Shorty is Oscar Gold (yes, I did it again).  Shout has continued their streak with their Select line with a beautiful transfer and loaded with special features.  HIGHEST POSSIBLE RECOMMENDATIONS!!!!