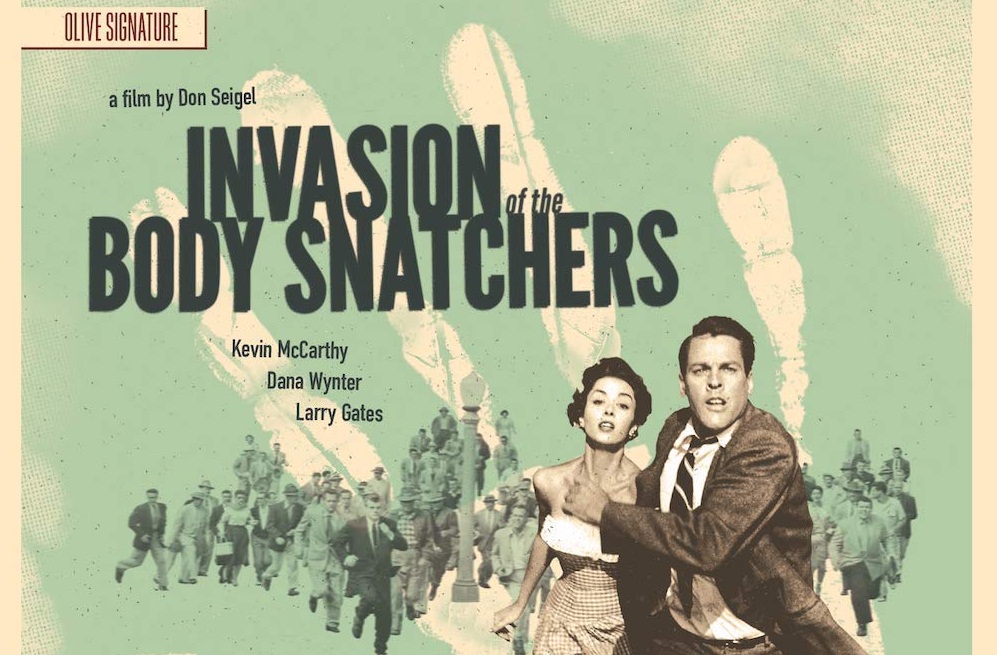 Adam gets hysterical about Pod Peeps and not going to sleep.  Olive Films’ signature collection has released a new edition of Don Siegel’s Low Budget Classic The Invasion of the Body Snatchers.

The original Invasion of the Body Snatchers has been written about so much one finds it almost impossible to bring anything new to the table when discussing this Sci-Fi Classic.  Directed with a stark lean urgency by Don Siegel the film is an exercise in paranoid horror.  Siegel’s lean economical style only helps this tale of the quietest of coup d’etat by a foreign invader.

“Look, you fools, you’re in danger! Can’t you see?! They’re after you! They’re after all of us! Our wives, our children, everyone! THEY’RE HERE, ALREADY! YOU’RE NEXT!”

From beginning to end Invasion of the Body Snatchers is an exercise in slow-burn paranoia.  The film slowly tightens the screws around its doomed lovers Dr. Miles Bennell (Kevin McCarthy) and Becky Driscoll (Dana Wynter).  The way that the script gives the smallest of details slowly building on them luring the audience into the mystery and strange circumstances set before Bennell, Becky, and Bennell’s friends Jack (King Donovan) and Teddy (Carolyn Jones).  This template hasn’t just been effectively used by the Remakes (there are currently three remakes 1978, 1993, and 2007) but by many other slow burn Sci-Fi entries.

The film’s success isn’t just in Siegel’s astute direction but the adroit adaptation of Jack Finney’s book by Daniel Mainwaring.  Mainwaring keeps everything lean, only adding the fewest of details.  The screenwriter understood that small details like Bennell and Driscoll starting a new relationship after being divorced are one of the many little nuances that etch characters quickly.  At a brisk 80-minute, even less if you decide to cut the beginning and ending codas as Siegel wanted, the film is designed to not waste time and give us everything we need.

The thematic content that so many discuss would not work without how well constructed the film is.  Because of the openness of the film’s plot, how it’s never labeled or specifically designed to be so specific to be about The Red Scare.  The filmmakers made a movie that would forever be read into and could be imbued with the time’s specific issues and concerns.

The new High-Definition digital restoration has done marvels for this film.  The first Olive release of the film was decent but upon a comparison between the two one can see the difference.  This newest release is cleaner with less digital noise if any.  The image is sharper with contrast levels that are leaps and bounds better than the 2012 version.

The Stranger in Your Lover’s Eyes is a 12-minute visual essay, using Siegel’s autobiography read by Siegel’s son Kristoffer Tabori as a way to dissects the film.  By using the autobiography and Tabori’s own recollections of his mother and father the essay gives context within Siegel’s career.  A thoughtful and insightful featurette.

The Fear is Real is a 12-minute collection of two interviews with Larry Cohen and Joe Dante about their experience with Invasion of the Body Snatchers and its relevancy in pop culture.  Cohen discusses seeing it in the theater during its original run. Dante discusses watching it for the first time on TV. The discuss how each was affected by it.  As Cohen said that it was a reference for The Stuff.  And as Dante had a creative partnership with its star Kevin McCarthy until his passing. Cohen even had a part in the remake in 1993.

I No Longer Belong: The Rise and Fall of Walter Wanger is a 20-minutes documentary on Walter Ranger the producer of Invasion of the Body Snatchers. The featurette hosted by writer Matthew Bernstein discusses the producer’s wild ups and downs in Hollywood.  Wanger was a man who was in part the inspiration for Billy Wilder’s The Apartment and the producer of Cleopatra. The featurette does a great job of highlighting some of the more wild aspects of the producer’s life and also his contribution to The Invasion of the Body Snatchers.

This Interview with Kevin McCarthy appears to be from an old AMC (now TCM) interview segment.  The 7-minute special feature shot sometimes in the early 1990’s has McCarthy discussing his time on a cruise ship performing the one-man show Give’ em hell Harry and a screening on the same cruise ship of Invasion of the Body Snatchers.

Rounding out the collection is a Still Gallery of documents and the theatrical trailer.

There has not been a proper hi-def collector’s edition of Invasion of the Body Snatchers.  Olive Signature has gone and corrected that with a set filled with great special features and an impressive remaster Transfer.  Highest recommendations!