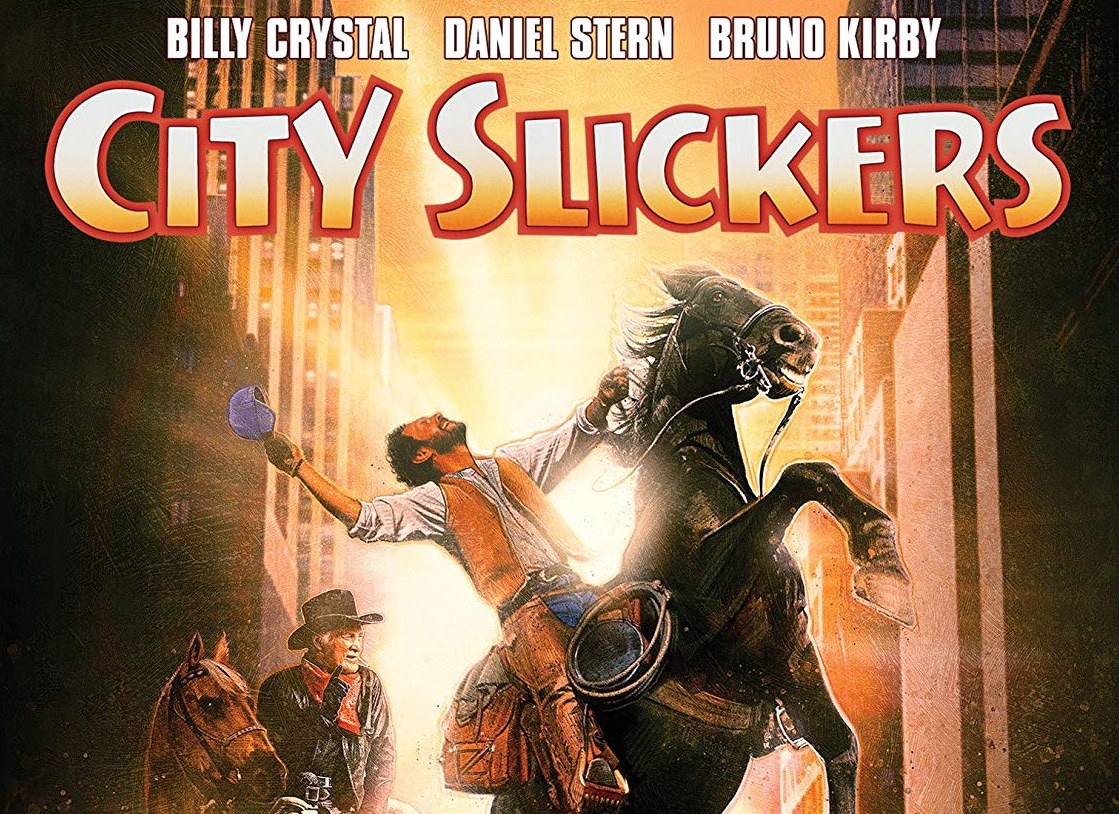 Adam remembers in City Slickers there’s just one thing, everything else don’t mean shit… What’s that one thing?  Find out with the new edition loaded with special features and a new Transfer of the Comedy Classic from Shout Factory’s Shout Select Label.

First, can we be honest?  There is no way that Billy Crystal and Bruno Kirby are 39-years-old.  I’ll give Daniel Stern credit but Crystal and Kirby playing guys not in their 40’s yet is a laugh-out-loud joke.  With that behind us, City Slickers under Ron Underwood’s direction is a great comedy adventure with a surprising amount of heart and a lot of fun.  The film is as much homage to the great westerns of yesteryear as it is a midlife crisis comedy.

The setup is as high concept as it gets.  Mitch (Crystal) and his friends Ed (Kirby) and Phil (Stern) are known for taking adventurous vacations.  40 around the corner and various mid-life crises’ boiling over the three men decide to take part in a 200-mile cattle drive.  As they begin the drive things go from comical to serious in equal measure.  These City Slickers turned Would-Be Cowboys have to prove their worth as they are left in charge of cattle forcing them to put aside their meager midlife crisis bullshit to settle up some very real problems.

What City Slickers gets right as a film is being an Adventure Comedy first before being a Mid-Life Crisis film.  Audiences have seen men and their delicate sensibilities rocked by their jobs and lives as they reach the apex of their lifespan looking for some meaning.  Screenwriters Lowell Ganz and Babaloo Mandell (I’ll never get over this name no matter how long I live) write a script that though heavy-handed in sections overall is a fun riff on the Western conventions.  A stampede caused by an electric coffee grinder.  Having a cow instead of a dog our main character bonds with.  All play out with perfect comedic timing and winning results.

The script smartly moves quickly from the navel-gazing comedy of Crystal’s Mitch being depressed about his six-figure job and upper-middle-class existence to getting out into the tumbling tumbleweeds of New Mexico and their adventure.  Even when there are moments of that ‘woe-is-my-life’ it’s typically at the expense of Stern’s Phil someone with real problems.  Those moments never linger just a reminder that our characters are “going through something”.  Though in the end the simplistic nature of the resolution of each of the character’s problems is so pap you will be expecting Mitch, Ed, and Phil to have bows on in the final moments.

Ron Underwood’s astute direction helps the script move beyond the bumpier moments in the script.  Just a year after making Tremors Underwood shows the horror comedy wasn’t a fluke.  The director continues his understanding of genre mashup with City Slickers.  Part of the fun of the film is seeing just how much Underwood directs the film with a keen eye on composition ala John Ford and Howard Hawks.  Anyone with a deep knowledge of Westerns will delight in the visual homages that are sprinkled throughout the runtime.

As a comedy, the film works sufficiently well.  A few of the jokes now fall flat because time has passed them by (the VHS Recording scene is one that stands out).  As an Adventure, City Slickers soars and remains the solid Film it was when it was released more than 25 years ago.

The new 4K Scan from 2018 they’ve done is marvelous.   The elements that Shout Factory has gotten and what has been produced are beautiful.  In any other iteration of City Slickers from Release Print to the last Blu-Ray, the film has never popped off the screen as it has on this disc.  All one needs to do is watch the “Yee-haw” scene for the perfect example of how crisp, balanced, and razor sharp perfect this image is.  Bravo to Shout Factory who continue to get Grade-A assets and turning them around into stellar transfers.

The Audio Commentary from Underwood, Crystal, and Stern is a solid track that’s more of an anecdotal commentary rather than a nuts and bolts technical commentary.  The track was ported over from the Original Special Edition DVD.

Back in the Saddle: City Slickers Revisited is a 29-minute archival making-of featurette that with the exception of the late Bruno Kirby and Jack Palance all the cast and crew participate. The making-of goes through the production from Billy Crystal’s formation of the idea to the script writing with Lowell Ganz and Babaloo Mandell to the hiring of Ron Underwood, casting, production and release.  The handsome making-of featurette definitely was made during the mid-00’s DVD boom as there are production values on this and all of the featurettes on this disc.

Bringing in the script: Writing City Slickers is a 21-minute companion featurette that details what the first making-of really only briefly discussed; the development of the screenplay for City Slickers.  Writers Ganz and Mandel and star Billy Crystal detail the process of Crystal’s outlining and then Ganz and Mandell scripting after the film being set up at Castle Rock. There are also comments by Underwood and Daniel Stern.

An ode to Norman is a 6-minutes discussion about the Norman the Cow who plays a central role in the film.  Primarily the featurette goes into how they created the cattle birthing scene using prosthetics.

The Real City Slickers is an 8-minute featurette about people who actually do the things they show in the film. The featurette seems more like a mini-pilot for a reality series than a special feature.

The Deleted Scenes is 3-minutes section where Underwood gives commentary on the two scenes. The two scenes; one where the trio try to help the cattle escape using the electronic grinder and the other that adds Ira and Barry to the ending scene.  Both rightfully were cut out but it is nice to see them though it would have been better if they had played out on their own also.

Rounding out the special features is the great theatrical trailer.  Added bonus it appears to have been remastered as it looks as good as the film itself.

This edition of City Slickers will delight fans to no end.  Boasting a beautiful new transfer and archival special features they’re sure to love.  Recommended.