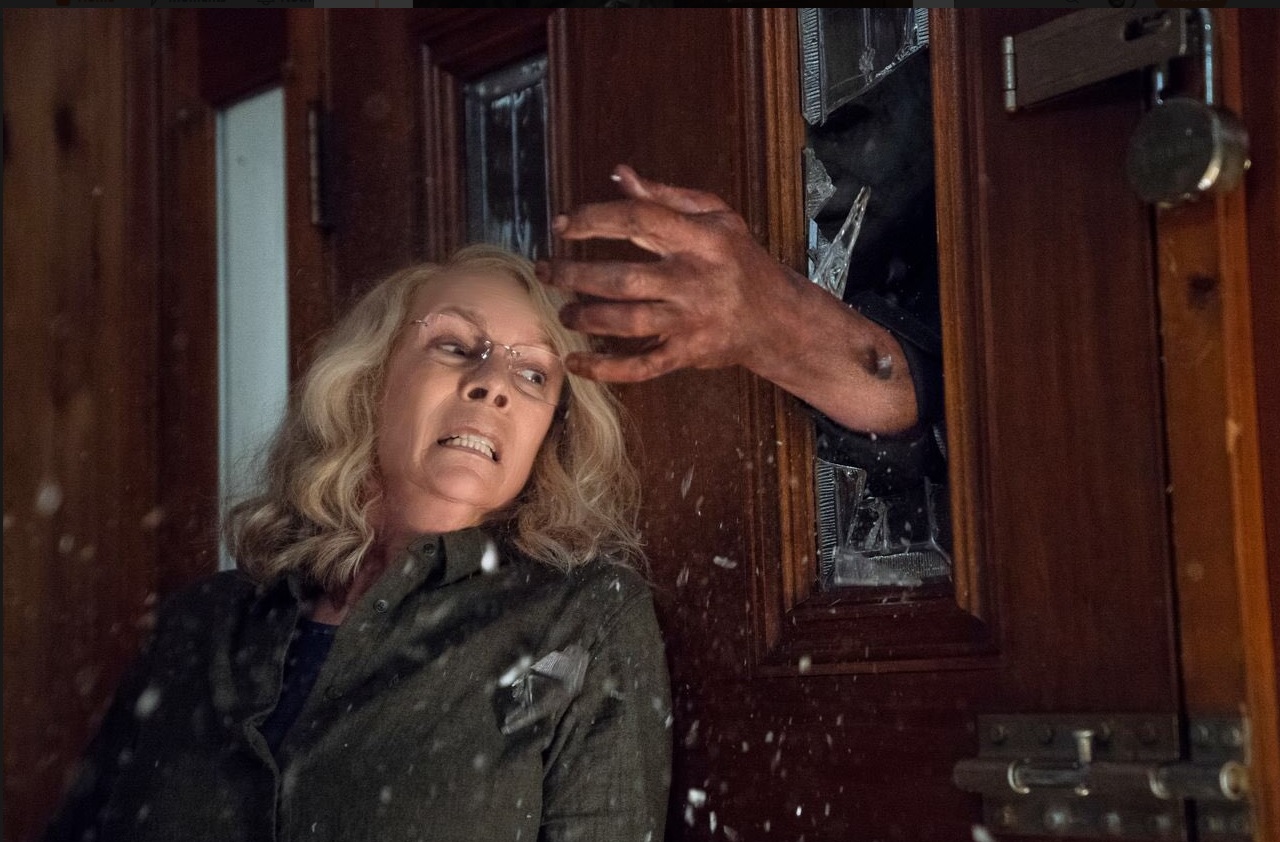 Halloween (2018) is the real deal.  A worthy Sequel backed by an amazing performance by Jamie Lee Curtis.

How does one create a sequel that lives up to a Classic?  Not only a classic but one that has multiple, and often times terrible, sequels.  Sequels that starred the original Protagonist.  Sequels that created ridiculous story connections.  If you are Co-Writer/Director David Gordon Green and Co-Writer/Producer Danny McBride you throw everything out but what made the original a Classic.  That means you disregard all of the ridiculous sequels, and the halfway decent ones too.  You make a film that treats original as the only film.  Welcome to Halloween (2018) the revitalized ass kicking true sequel to the 1978 Classic.

It has been 40 years since Michael Meyers terrorized Laurie Strode (Jamie Lee Curtis) and her two friends in Haddonfield Illinois.  Since that fateful night where Meyers killed 5 people, Laurie has waited.  Waited for the time that he would come back and complete the circle of events on that fateful Halloween.  Laurie’s life has been in preparation for one moment; when Michael Meyers escapes.  This is not an “if” for her as much as it is a “when”.

Much of the success of the film rests on the shoulders of Jamie Lee Curtis.  Curtis an actress that has rarely been given roles that truly showed off her magnetic screen presence has been given just that in Laurie Strode + 40 Years.  Though Laurie was an iconic role for the woman who would be dubbed “The Scream Queen”, there wasn’t much heft to the role.  Halloween (1978) was designed to be a lean and mean exercise in genre.  Here screenwriters Green, McBride, and Jeff Fradley have filled that void, giving context and etching a life lived between these two films.  Curtis fills that contextual void they give with anger, pain, sadness, and rage.

The gravitas that Curtis brings to the role reclaims the entire series away from Michael Meyers and brings it back into focus what should have mattered in the first place; Laurie Strode.  Within this sequel, Laurie is a woman who’s devoted her entire life to one moment.  The moment she will face off against her nightmare, her abuser, the one that had shaped and changed her life forever.  Curtis plays the reality of the role rather than the movie star performance.  Her Laurie is not just a checklist of PTSD symptoms.  She’s caring, funny, protective, fierce, and smart.  Curtis’ performance as Laurie is fully realized in a way that makes this film special.

The Actress shows us the shell and the soul of a woman who was continually let down by not only the system but the medical profession, the lawmakers, and police for four decades.  Everyone doubts Laurie, even her own daughter (Judy Greer) and Granddaughter (Andi Matichak).  Curtis brings that loneliness of disbelief in a victim to startling life.  There is an anger that isn’t generalized.  It is very specific.  Often times in film, especially in drama, anger is generalized through yelling and screaming.  Here we see Laurie’s anger through her actions, through what is said and what isn’t said.

There is a quiet moment in a truck as Laurie watches something occur.  The way that Curtis plays it, the way that Gordon as a director gives her the open space and time to have this moment sums up Halloween (2018) better than anyone will be able to.  It’s this moment and others like it that takes this film and elevates it to the level of the original.  Where Halloween (1978) was about the faceless evil that men do, Halloween (2018) is about the consequence of that evil and the repercussions that women must deal with.

By the end as John Carpenter’s famous theme begins to play, Jamie Lee Curtis and her character Laurie Strode has reclaimed the Halloween Franchise from the faceless male shape.  The one that for 40 Years had been perceived as the lynchpin of the series.  It is the Curtis and the rest of the Cast and Crew that have reclaimed it from that faceless male shape to the most important figure of the series; Laurie Strode.  For the first time since 1978, Halloween is the most important and vital franchise in horrordom.  Not because its a kick-ass horror film, which it is, but because it gives its Final Woman (let us not call her a “Final Girl” for once) the respect she deserves.

Halloween is in theaters October 19th