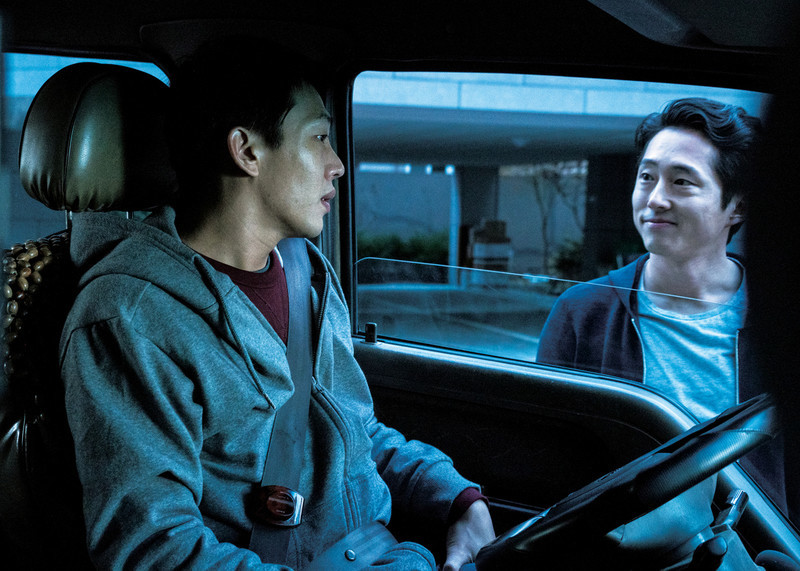 Jongsu (Ah-in Yoo) is part of a lost generation.  He has a college degree that has resulted in only a part-time job.  He goes to job interviews where he stands in a line of eight other twenty-somethings who are underemployed.  The employer grills them as a group about their levels of commitment to working late as he publicly pares down the roster of candidates. Jongsu spends the rest of his time wandering aimlessly or crashed out at his father’s home, watching pointless television.

Jongsu’s father is in jail, awaiting the outcome of his second assault case. One day Jongsu meets Haemi, a young woman working as a street salesgirl. She gyrates and dances to promote some store or product. The two become friends and lovers.  When Haemi returns from a long-planned trip to Africa, she introduces Jongsu to her new friend, Ben (Steven Yeun).

Ben is sophisticated and wealthy.  Even his Korean dialect is precise and cultured.  He drives a Porsche and lives in an expensive apartment in what he refers to as “our building”.  Haemi seems beguiled by Ben and to Jongsu’s displeasure his wealthy rival becomes a third wheel in Jongsu’s relationship with Haemi.

That’s just a small part of the first act of Burning, the 148-minute new film from director Chang-dong Lee (Secret Sunshine).  The film is based on the Haruki Murakami short story “Barn Burning” which itself is an homage to a 1939 short story of the same name by William Faulkner.

Burning avoids categorization in a gratifying way.  It begins as a character drama and romance and then elements of genre films and procedurals start creeping into the narrative in ways that I won’t reveal here.  One of the film’s central pleasures is you never quite know where things are headed.  It’s an organic experience.  We’re dropped in the midst of this trio of characters, and we’re simply along for the ride.

The film is a subtle study in violence and masculinity.  Although Jongsu never interacts with his father directly, we hear the details of his father’s crimes when Jongsu attends the court proceedings. The government official who was attacked by his father required six weeks of medical treatment to recover from his injuries. Does the mild-mannered Jongsu have that kind of rage simmering beneath his casual exterior?

Haemi’s second suitor, Ben, seems to take personal glee in thwarting Jongsu’s attempts to win the young woman’s affections. Does Ben truly have feelings for Haemi?  Or does he simply enjoy being a thorn in Jongsu’s side?  We get the feeling that Ben makes his life choices so he can enjoy observing the consequences, not because he has a vested interest in the outcome.

Burning is anchored by a trio of excellent performances.  Ah-in Yoo is a box office superstar in Korea, but is likely unknown to America audiences.  He embodies Jongsu’s insecurities and discomfort through his awkward body language and uncomfortable glances.  It’s a powerful performance that doesn’t always need words to convey the content of Jongsu’s character.

Jong-seo Jeon is captivating as Haemi. Her work is all the more remarkable when you learn that Burning is not only her first film, but it was her very first audition as an actress.  The film also gives Steven Yuen an opportunity to show his acting chops.  Yuen was a very popular character on The Walking Dead, and it’s encouraging to see him escaping TV type-casting and working on a drama of this caliber. Without the oily malevolence he gives to Ben, the film would never reach the dramatic heights it attains in its third act.

Some films emerge from Cannes with critics all abuzz, but they leave audiences scratching their collective heads.  There’s a hive mentality to film festival going that can distort critical opinion from time to time.  I refer to it as festival brain.  In an ocean of mediocre films, the one that is merely interesting can seem in the moment like a work of genius.

Make no mistake when it comes to Burning.  It’s the real deal, one of the best films of 2018.  I know that I’ll still be thinking about it months from now.