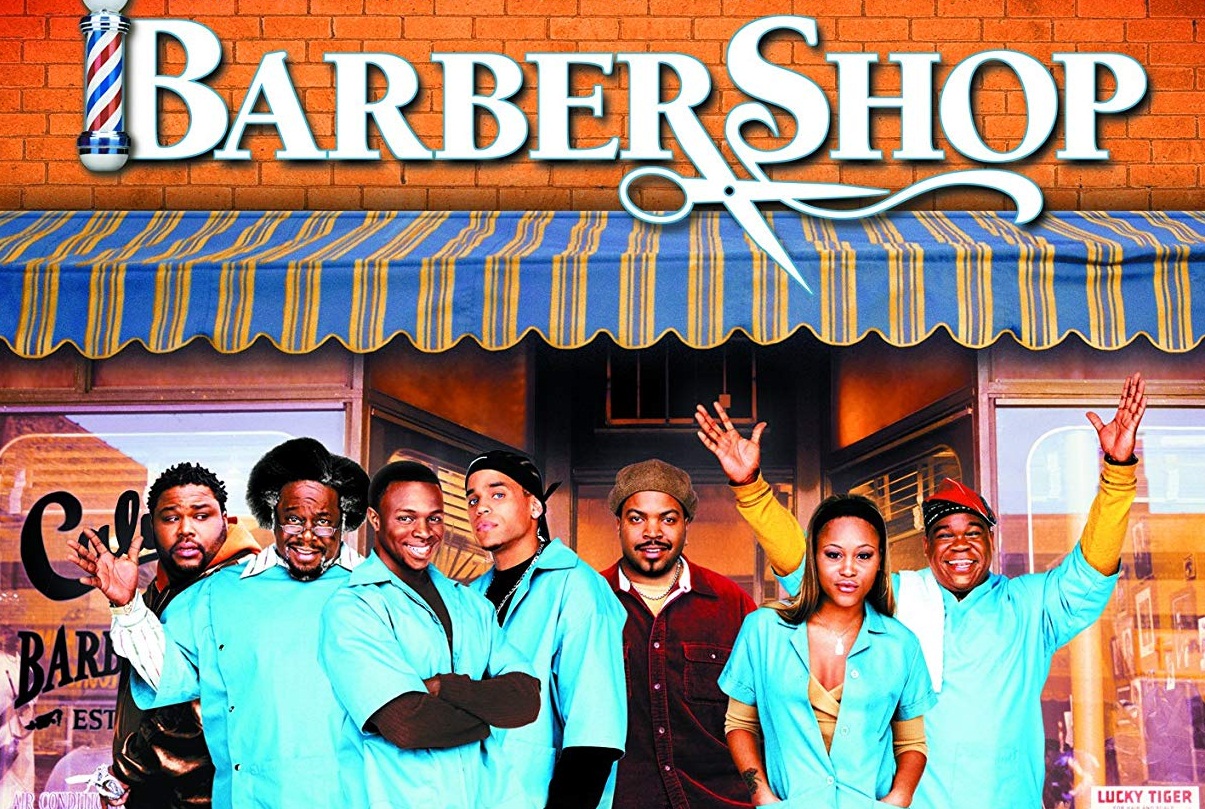 Adam gets his ‘high and tight’ done at The Barbershop.  The Tim Story neo-classic comes to Blu-Ray loaded with special features from MVD’s Classics Label.

The genius of The Barbershop is in its understanding that the single setting story being told is a character piece rather than a broad comedy.  This initiate understanding of what kind of movie it is allows for a story that’s warmly humane and beautifully drawn about real-world problems.

The day in the life of Calvin’s Barbershop as its owner Calvin (Ice Cube) must figure out how to keep the Barbershop from going under.  As options continue to dwindle and pressure mounts Calvin makes some very ill-advised decisions.  It’s through the day that Calvin realizes what is important to him.  Primarily the tight-knit community that has been created within the Barbershop.  Can he take back the bad choices made earlier and save what’s truly important; The Barbershop.

Director Tim Story and screenwriters Mark Brown, Don D. Scott and Marshall Todd have created a film that allows the comedy to come from the characters rather than situations.  The story’s understanding that the situation that Calvin finds himself in, his business financially going under, is no laughing matter and is the core of the piece.  How they deal with this situation is what makes The Barbershop, even sixteen years on, rise above most comedies.  They adroitly show that this decision echoes beyond Calvin to the denizens of the shop.

As history begins to play out it The Barbershop may be the best work of Ice Cube’s career.  As Calvin, Cube is a man coming to grips with his place in the world.  Calvin’s dreams of a career in music are quickly in the rearview and the mounting pressure of a family business he wants nothing to do with. This arc is relatable to anyone that has or is dealing with accepting of a career that may not have been their first choice.  Cube and Story know this and exploit the star’s persona to great effect. Calvin is guarded unwilling to tell anyone of the shop’s financial woes.  That turn for Calvin, having to reach out for help and having to confront his mistakes are powerful moments for Cube, which the actor is more than able to rise to the occasion.

The ensemble that Cube has been surrounded by are all aces.  Sean Patrick Thomas, Michael Ealy, Eve, Troy Garity and Cedric the Entertainer as the various chairs of the Shop do great work.  Though some of the characters may be on the cusp of stereotyping the smart scripting and performers work help imbue each of those questionable moments with a healthy amount of originality.  It’s the difference between stereotyping and archetypes which The Barbershop has down to a science.  Even Cedric the Entertainer as Eddie aka “The O.G.” of the shop could have been a terrible tonal misstep.  Cedric’s performance is so heartfelt and so sincere he earns the broad moments in the story as character tics rather than schtick.

The Barbershop is a Comedy Neo-Classic and earns this with its heartfelt filmmaking and storytelling.  The film works in the same vein as Hal Ashby did in the 1970’s with passionate character work that defies comedies of the time and even most comedies presently being released.  Often times movies are about people accomplishing impossible dreams.  Rarely do we see films where the dreams are what is holding you back and cause your life harm.  Rarer still are those that show the good in what you have.  The Barbershop tells that kind of story.  A heady message for 2002 and even more so in 2018.

The MVD Classic transfer is great.  Yes, it may be an older transfer but the upgrade in the compression of the older transfer does wonders.  This reviewer has tested this Blu-Ray against the various versions (I have the DVD versions of the film in my collection) and the differences are pretty impressive.  This Blu-Ray is razor sharp.  The contrast levels are remarkably better than the original DVD.  The transfer benefits all around by this Hi-Def upgrade.

NOTE: All special features were ported over from the Special Edition DVD released in 2003.

The Audio Commentary with director Story, Producers Robert Teitel, George Tillman Jr., and screenwriter Don Scott Jr. is a great “nuts and bolts” look at the production.  Story, of course, takes the lead here as he guides the various participants through the film. A solid commentary.

The Hair Club is a 40-minute behind-the-scenes making-of documentary.  The doc covers all aspects of the film’s production from the inception, pre-production, production, and release.  It’s the best feature on the disc.

The seven deleted scenes are perfunctory moments (mostly dealing with the Anthony Anderson storyline).  All definitely should have been cut from the film as described by director Tim Story in his commentary on these scenes.

Bloopers and Outtakes are the standard people laughing and flubbing their lines.

A great flashback to the early 00’s is the Trade it Allmusic video with P. Diddy.

Rounding out the package is a photo gallery and the trailers for three (of the four) films of the Barbershop-verse.

This is a no-brainer, The Barbershop is a classic comedy that deserves a place in everyone’s collection.  MVD Classic’s upgrade to Blu-Ray with all the Extras and an upgraded Transfer makes this an offer hard to refuse.  HIGHEST POSSIBLE RECOMMENDATIONS!

MVD Classic’s Blu-Ray of The Barbershop is out now