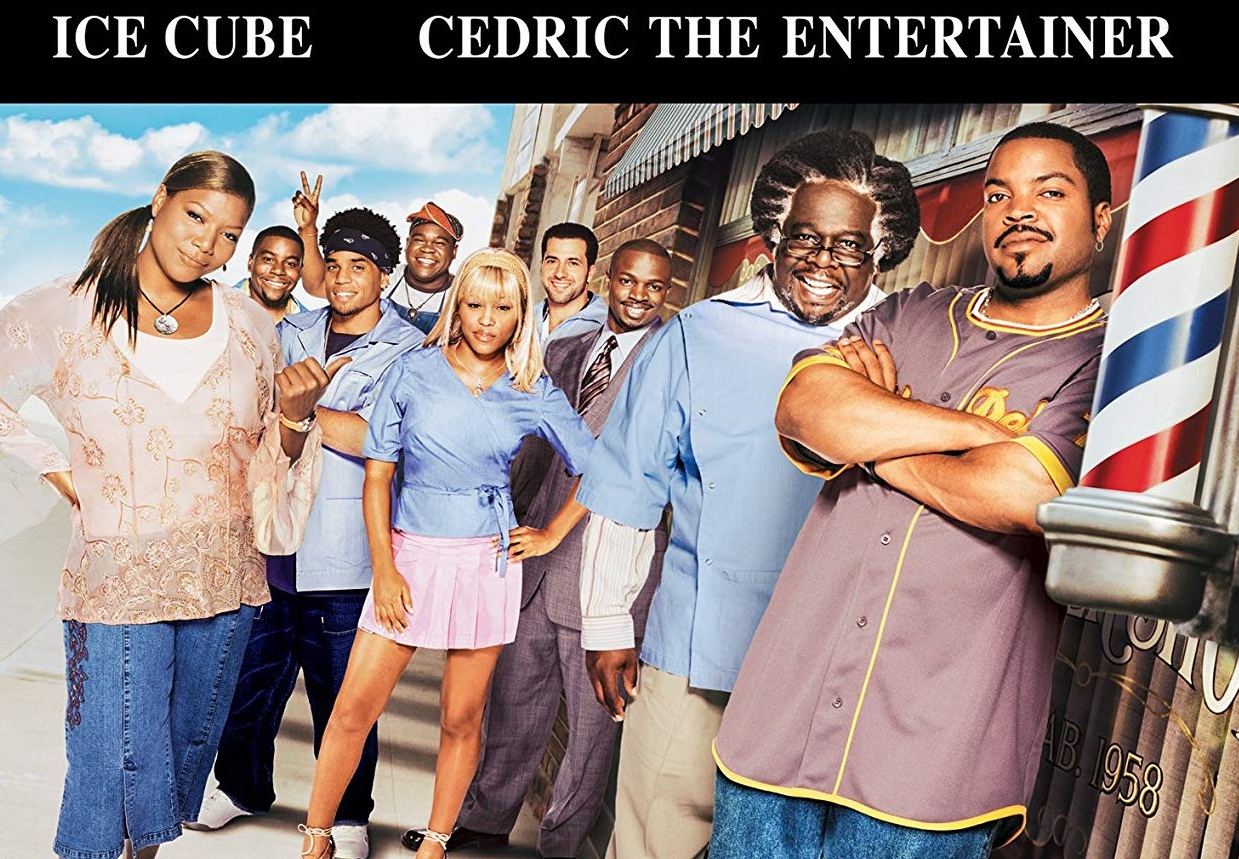 Adam returns to get his hair done with the cast of Barbershop 2: Back in Business.  The Sequel to the Comedy Classic comes to Blu-Ray loaded with special features from MVD’s Classics Label.

The original Barbershop was a bit of lighting in a bottle.  Right story.  Right cast.  Right moment.  Viola!  Magic.  The sequel could not and does not try to recapture that.  Rather, Barbershop 2: Back in Business is a feel-good film about a small business’ place in its community.

Trouble has found Calvin and the residents of the Barbershop in the form of Nappy Cutz and Gentrification on the East Side of Chicago.  The big business Corporate Nappy Cutz has been brought in as a way of cleaning up the image of the small community that’s been underserviced for so long.  This is not altruism but rather capitalistic bullying from a Corporate Magnate (Henry Lennox) and a smooth-talking Politician (Robert Wisdom).  They plan on not only pushing out Calvin but the other small business owners that make up this community around the Barbershop.

Part of the power of this sequel to the surprise hit is how positive it is in its comedy and outlook.  “Feel good” is a phrase that is bounded around way too much for this reviewer’s taste.  Feel good is something that’s hard earned not something that doesn’t account for bad things happening.  Barbershop 2 understands this innately.  Rather than going through the same motions of the previous film of Calvin and his crew having to contend with the hardships of a failing business, they ask the question can the micro survive with the macro.  The surprising answer, in this case, is yes.

Though the star here is Ice Cube the heart and soul is Cedric the Entertainer as Eddie.  The bight shiny center and surprise delight of the first film takes center stage here.  Cedric’s Eddie may at first glance appear to be a caricature.  That window dressing belies a fully formed heartfelt performance.  Rather than just giving Eddie bigger comedic rants, the film digs deeper into his backstory.  Cedric handles the character demands with the kind of Charm and Comedic aplomb the actor is known for in his Standup Performances.

The supporting work from the likes of Eve, Michael Ealy, Troy Garity, and Sean Patrick Thomas is lively.  Each actor benefits from fully realized subplots and individual moments to shine.  Adding additional support are Queen Latifah (who gets her own spin-off which we will be discussing shortly), Kenan Thompson which amounts to essentially cameos.  Though his role has been slightly lessened Ice Cube remains the center of the film.  As Calvin Cube remains the core of the film, our guiding light as well as the rest of the cast.

Replacing the original director Tim Story is Kevin Rodney Sullivan.  Sullivan with a bigger budget is allowed to open up the film, not in a flashy way but keeping in telling this ever-widening series.  His direction is stylish in the right kind of way as to not distract but enhance the film.  Moments like going from Black & White to Color film stock are the small distinct stylish notes Sullivan brings to the table that allows the dramatic moments a bit more force.

The biggest compliment that one can give to Barbershop 2: Back in Business is that it’s not a retread of Barbershop.  Rather than rehash the same jokes and story beats, the filmmakers have made a film that looks at community, gentrification, and history (both Black and Chicago) from the perspective of these characters.  It never preaches and is only design is to enlighten through laughter and understanding.  In 2018 we need more of this.  A trip to the Barbershop is in more than welcome, it’s needed.

The transfer given to MVD Classics is better than the original Barbershop. Though that is to be expected with considerations to the time frame the transfer was created (circa the mid-2000’s).  The upgraded compression like the original help gives this transfer a bit more life.  It’s not an amazing transfer but none-the-less MVD Classics has done a great job in making sure that it’s presented with as much “breathing room” as possible.

The Cast Commentary is an informative and entertaining walk through the film with comments by Cedric the Entertainer, Sean Patrick Thomas, Troy Garity, and Jazsmin Lewis. There is an optional Video Commentary mode for this commentary.

The Behind the Scenes Crew commentary is more on the dry side with the participant’s director Sullivan and Producers Bob Teitel and George Tillman Jr. giving a very informative, nuts and bolts commentary.

The six deleted scenes are more extensions of scenes within the film.  They only add characters moments not really anything significant.

The outtakes amount to a blooper reel.

Two music videos from the film are included.  Anyone with an appreciation of the big-budget music videos of the early to mid-2000’s will love these.

Barbershop 2: Back in Business is a worthy successor to the original.  Chalk this one up to another win for the MVD Classics Label retaining all the special features for this catalog title.  RECOMMENDED!

MVD Classics’ Blu-Ray edition of Barbershop 2: Back in Business is out now