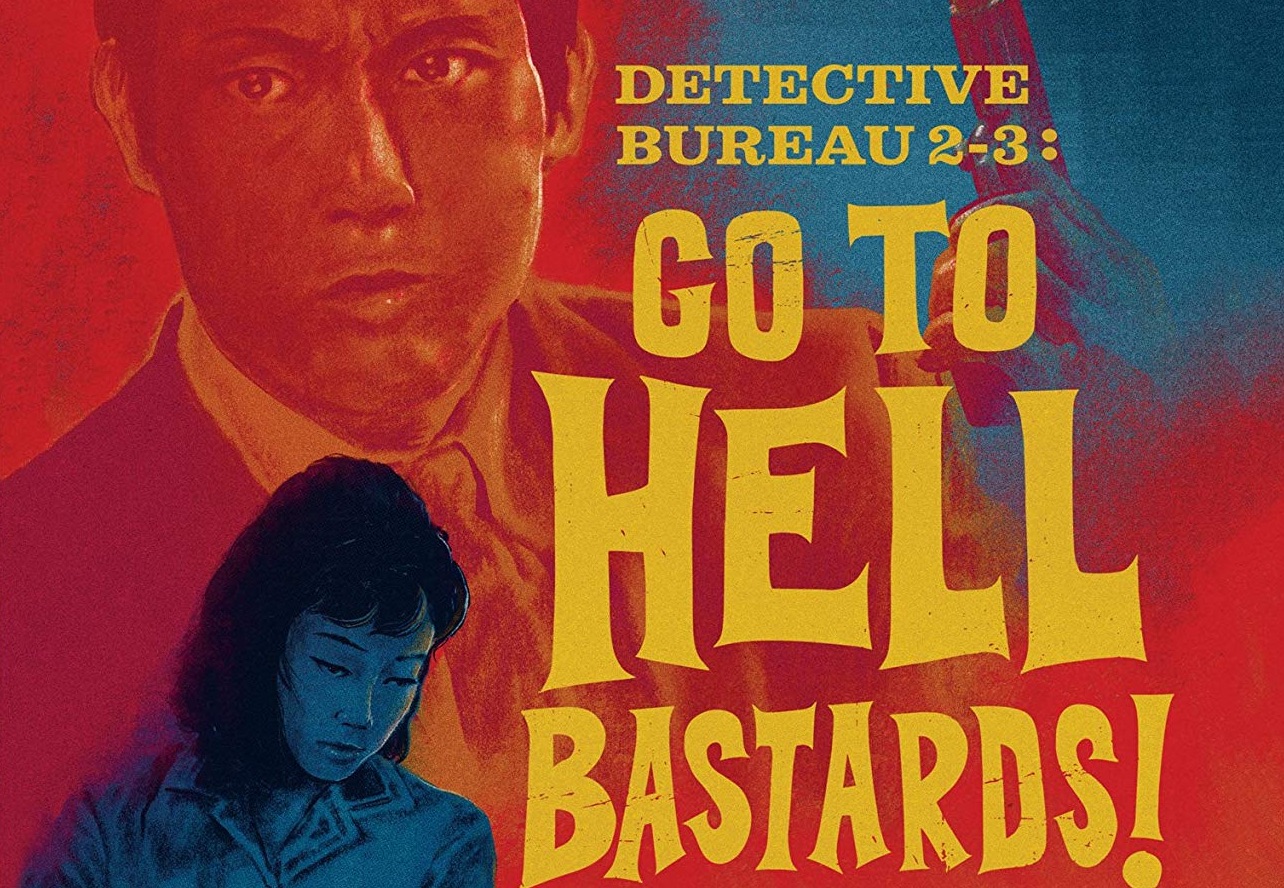 Adam has no chill for the brilliance of Seijun Suzuki, this applies to the newest Arrow Video Blu-Ray release; Detective Bureau 2-3: Go To Hell Bastards.

Now, for the longer version.

Seijun Suzuki makes films for specific film geeks. Those films make no qualms about what they are.  There is a singleness to Suzuki’s crime films that feel like spiritual cousins to the work of Michael Mann, John Woo, and Shane Black.  Not in content or style but their adherence to their filmmakers’ unique visions of crime and criminals.  Suzuki’s Detective Bureau 2-3: Go to Hell Bastards showcases a like-minded director at the top of his game and prowess.

Based the novel by Haruhiko Ôyabu Detective Bureau 2-3: Go to Hell Bastards tells the story of a Mike Hammer style private investigator Hideo Tajima (Jô Shishido). Tajima’s agency in need of money and work begins a Red Harvest style gambit pitting Police and Warring Yakuza families against each other.  Tajima sees corruption and stupidity at every turn but also the possibility of getting something out of it.  As the warring Yakuza families begin to hire Tajima, who they think is a freshly released prison con, their businesses are thwarted at every turn.  How Tajima continues to one-up the Yakuza and the police even as both have him in their sights is some of the best storytelling Suzuki has ever put on screen.

What makes Detective Bureau 2-3: Go to Hell Bastard so special and separates it from other Japanese crime films is that it’s an undercover critique and evisceration of Colonialism and US’s Occupation of the country.  The film never feels like anything but a breezy jazz and drug-fueled caper.  A story that’s designed to make you laugh as much as it’s built to be enthralled by.  Its critiques are embedded so deep many will not see them upon first viewing (this reviewer only found them upon his third viewing of the film).

The mixture of comedy and action in the film may seem like a standard affair nowadays but over fifty years ago it was a radical mixture.  Suzuki’s film is a model of how to create a film that deals in tonal shifts.  Like the Jazz Pop Score Detective Bureau 2-3: Go to Hell Bastards feels improvisational, like the director who could do anything at a moment’s notice.  And He does.  Wither it’s a wild shootout or a Bond-ian style death trap or a full-on musical number Suzuki handles it with nary a bead of sweat.  There is nothing that Suzuki or Shishido won’t do to entertain.

Detective Bureau 2-3: Go to Hell Bastards is a film that is equal parts crime caper and action comedy with a lot more on its mind beyond entertainment.  The film is a well-oiled machine designed so well and efficiently that one wonders why only one sequel was made and not more.

The transfer provided by Nikkastu Studio to Arrow Video is solid transfer.  The grain structure and image detail are perfect, giving the image the look of a great archival film print.

The 30-minute interview with Critic Tony Rayns is actually more of a visual essay with Rayns discussing all aspects of the film and the careers of both Jô Shishido and Seijun Suzuki.  Rayns goes into details like Shishido’s unique look, the anti-Colonial message and why Suzuki never made more sequels to the original. In absence of other substantive extras, this is a great dissection and discussion of this great film.

Rounding out the special features are a still gallery and a theatrical trailers.

This is a no-brainer for any Crime Film Fan.  Detective Bureau 2-3: Go to Hell Bastards is the real deal.  Arrow Video has provided another stellar Japanese Crime Film Hi-Def released filled with solid extras and a beautiful transfer.  HIGHEST POSSIBLE RECOMMENDATIONS!!!!