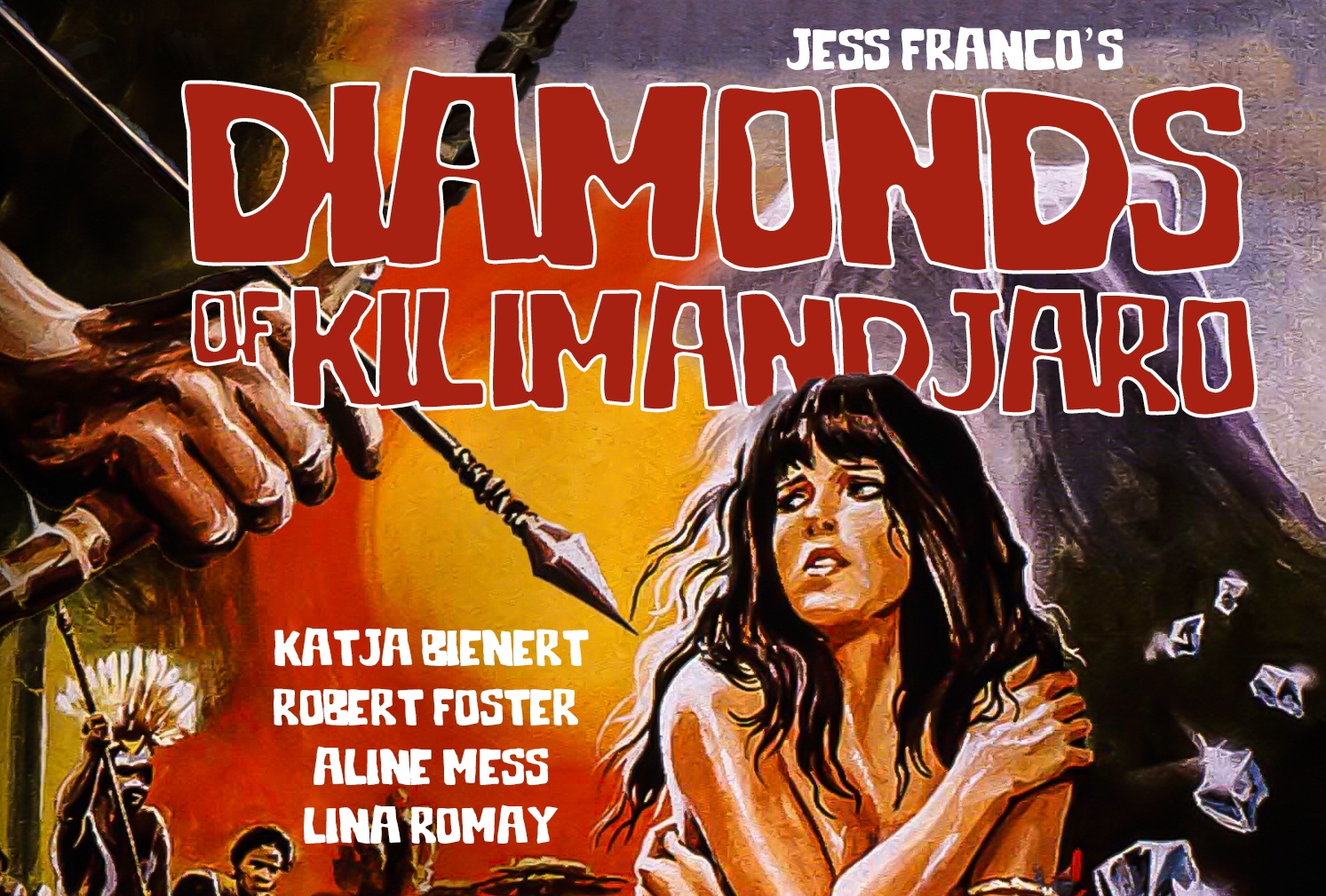 Adam takes a look at the world of 1980’s Grindhouse Late-Night Genre Films with Jess Franco’s Diamonds of Kilimandjaro.  Being released by MVD Classics on Blu-Ray.

I don’t knock anyone for their love of Jess Franco (aka Jesus Franco) and his ouvre of softcore genre films.  A man whose reputation was built around the Late-Night Showings of his films on cable stations like Cinemax and Showtime.  Somewhere between softcore nonsense and tonally oblivious “jungle” adventure is Diamonds of Kilimandjaro.

The set-up is straight out of Edgar Rice Broughous. A young girl is lost in a random nondisclosed African nation years before.  Now older the girl (Katja Bienert), Diana, is a part of the Mabuto tribe that protects said Diamonds.  A group of idiot treasure hunters begin their journey to find “fortune and glory” of finding those precious diamonds.  They are hunted by Mabuto to sacrifice to their living deity … you probably already guessed it the white girl Diana.  Will they survive?  Will Diana remember that civilized way of the white person?  You can probably guess where this tone-deaf script is going.

Franco’s film is more concerned with longing shots of naked women and animals in the wild than it is with any of the plot that’s been dredged out of the 1940s.  The film at every turn seems to want to offend with its treatment of women, African culture, animals and just about everything that it turns its camera too. This Spanish production has little want or need for being the least bit sensitive or even intelligent with its subject. One would be angry if the proceedings were so lazily constructed.

The film cannot decide if it wants to be softcore or a full-on genre exercise, rather it settles perfectly on the fence choosing neither.  By doing so it does not satisfy either format or the fans of them giving you half measures. Diamonds of Kilimandjaroaspires to be Sheena: Queen of the Jungle but never pushes itself enough to even get to that ridiculous Tanya Roberts entry.

The transfer is good considering the source master MVD was given has not aged well in the least.  There are moments within the film that the transfer is beautiful free of scratches, blemishes and the like.  Other moments the transfer given to MVD is an unmitigated disaster.