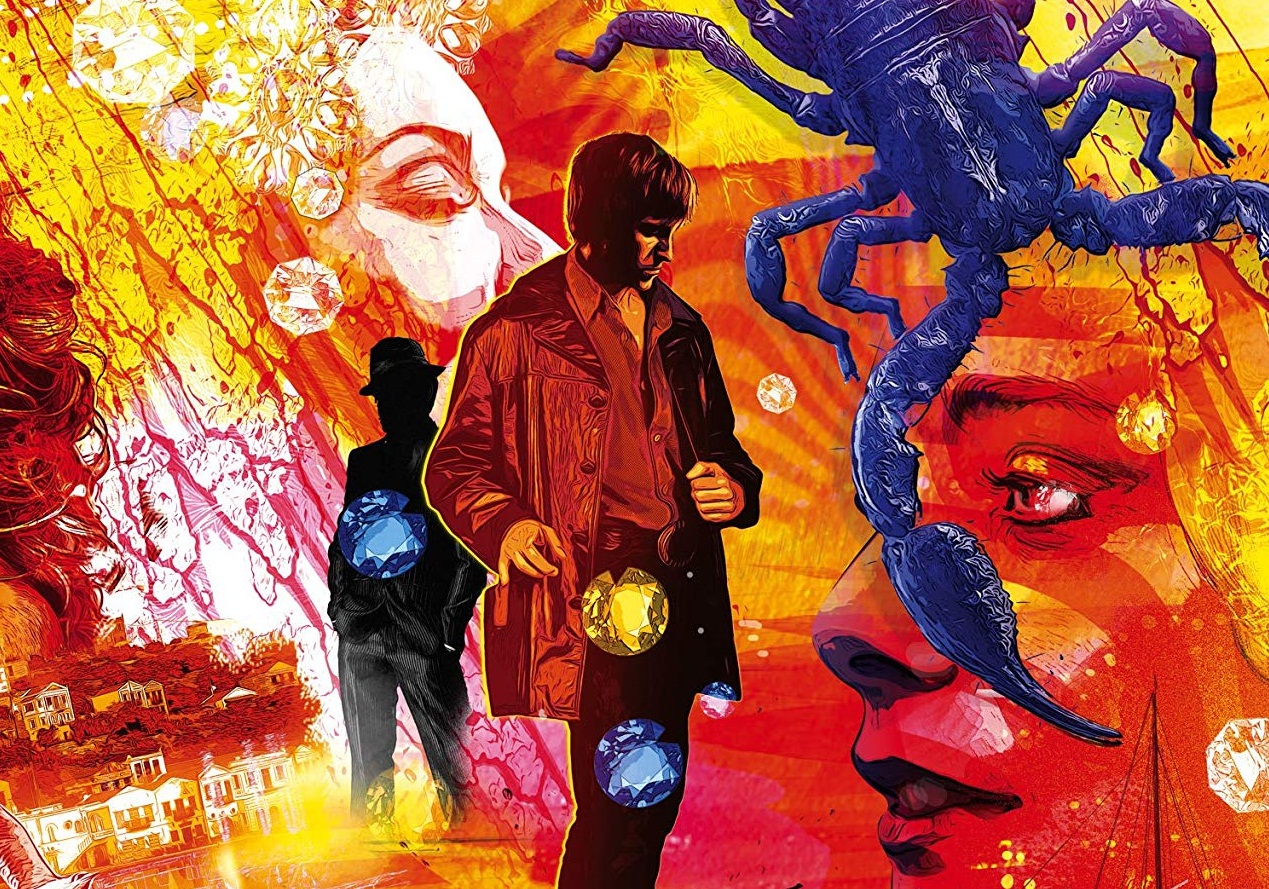 Adam takes on The Case of the Scorpion’s Tail and is glad he did.  The Sergio Martino pseudo-Giallo is being released by Arrow Video in a shiny new Collector’s Edition.

Part of the beauty of film discovery, especially older films, is how they or a genre will defy your expectations.  Over the years slowly diving into Giallo films one of the facets that continually surprises are the films that are considered Giallo.  Not merely the Argento style proto-slashers, but a mixture of horror, psycho-sexual thrillers, film noir, and poliziotteschi.  This brings us to Sergio Martino’s The Case of the Scorpion’s Tail.  A film that expertly melds those specific genres into a heady brew that plays smarter and meaner than one would expect.

A plane crash.  A window.  Foul play.  Double crosses.  Sex.  Affairs.  A multi-million dollar insurance policy.  A possible serial killer.  Everything that insurance investigator Peter Lynch (George Hilton) and journalist Cléo Dupont (Anita Strindberg) team up to get to the bottom of.  Much of the film’s labyrinthine plot is better to watch than explained in a review.

Part of the fun of the film is how Martino takes the expectations of the plotting for these types of genre exercises and twists them.  This is in no small part the work of both Martino and screenwriter Ernesto Gastaldi.  Not content with just making a straight Giallo Martino and Gastaldi have created a flashy Globe Trotting Euro Horror Crime Noir.  Part of the delight of Martino’s work is that when he is within the genre, he is within the genre.  The horror elements are as delightfully gory.  The nourish elements are steeped in sexuality and crime.  The mixture of the two set across Europe is a great combination feels like a big budget thriller that the Modern Era would never allow for.

The less said about The Cast of the Scorpion’s Tail the better as it is a Giallo whom’s secrets are best unraveled watching rather than being told by some critic.  Needless to say, Martino with the aid of not only Gastaldi but his game cast led by Hilton, Strindberg, and Lisa Galli has created not just a high-class Giallo but a truly great Film.  That’s Film with a capital “F” to be clear.

The brand new 4K restoration of the film from the original camera negative that Arrow has been provided is superb.  The Film’s lush color scheme is perfectly reproduced on the disc.

Arrow has included both the Italian and English versions of the film.  This is mentioned because like previous Arrow releases of this ilk, they allow you to choose the configuration you want.  So, if you want to watch the Italian version with the English Dub, no problem.  Vice versa, no problem.  Subtitles on the English dub, no problem.  It’s a small but vital piece that just illustrates how much Arrow Video cares about their discs.

The commentary by Ernesto Gastaldi is pretty fantastic and compliments another feature on the disc, The Case of the Screenwriter Auteur, perfectly.  Note: Commentary is in Italian with English Subtitles.

Under the Sign of the Scorpion is a new 20-minute interview with star George Hilton where he discusses how he was cast in the film and the production and his relationship with Martino.

The Scorpion Tales is a new 47-minute interview with director Sergio Martino. The interview though the bulk of it is about The Case of the Scorpion’s Tale is about the man’s career before and after the film.  Martino is a jovial man who has no problems talking honestly about his films, the cast and crew and the production.  The interview could be twice as long and I’m sure that Martino could recall even more stories just from Scorpion’s Tale.

Jet Set Giallo is a 20-minute interview with critic Mikel J. Koven about Italian Giallo and specifically the films that Sergio Martino made within the genre.  Koven’s piece is great giving context to Martino’s work, who in Koven’s analysis seems like the Howard Hawks of Italian Genre Cinema (my words not his).  The piece is great and more of a Visual Essay than an actual interview.

The Case of the Screenwriter Auteur is another video essay this one by critic Troy Howarth.  The focus of this 15-minute essay is Screenwriter Ernesto Gastaldi.  Gastaldi was the screenwriter of such Italian Genre classics as Day of Anger, Torso, The Grand Duel, and The Suspicious Death of a Minor.  Howarth does a great job of attempting to persuade the viewer that Gastaldi was indeed the architect of these amazing films as they share similar social, literary, filmic styles and concerns.

Rounding out the disc is the stylish theatrical trailer.

The Case of the Scorpion’s Tail is a classic that should be owned by all Film Geeks.  Arrow has put the film’s best foot forward with a great transfer and complimentary special features.  Highest possible recommendations!!!!