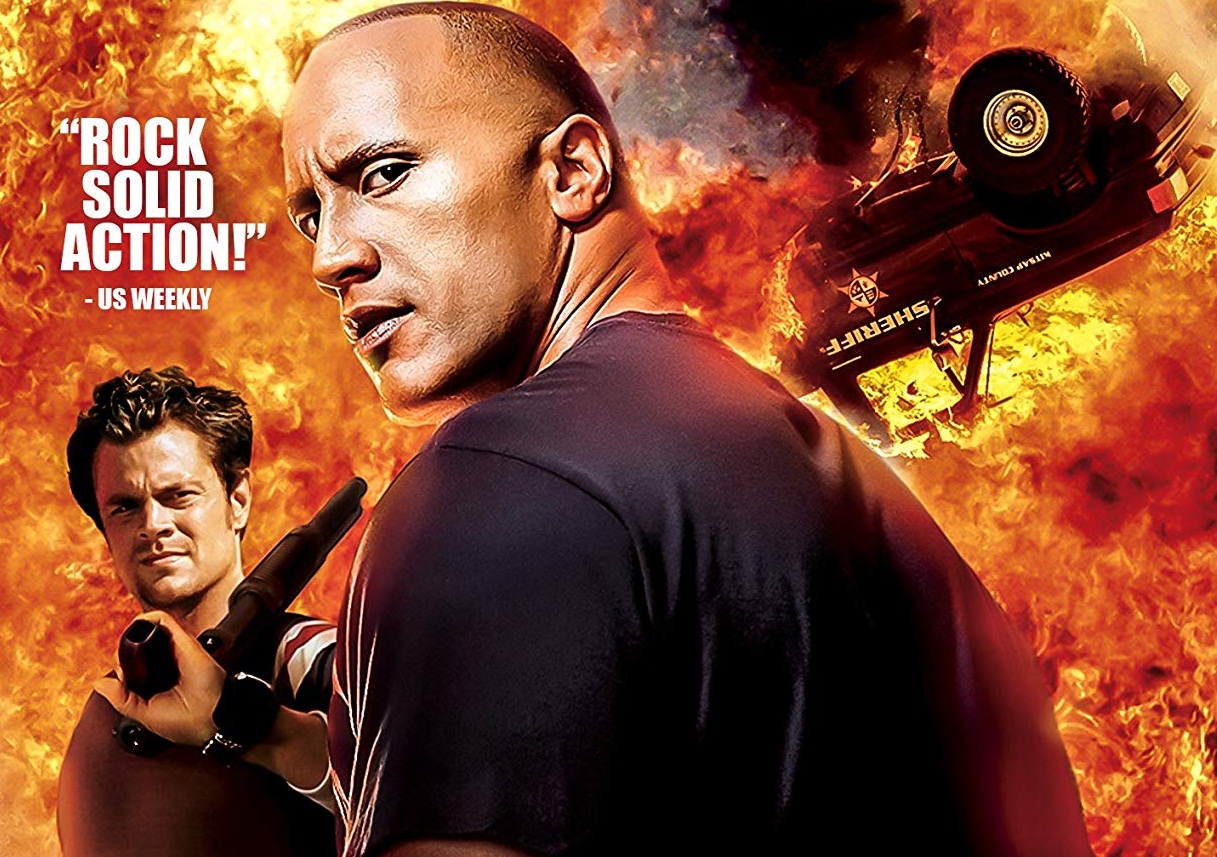 Adam gets all gushy about The Rock aka Dwayne Johnson in the not-a-remake of Walking Tall.  The film is being released by MVD’s Marquee Collection.

No matter what anyone says this is not Walking Tall.  The tale of Buford Pusser still remains within the confines of the 1973 Joe Don Baker starring Hicksploitation classic of the same name.  The Kevin Bray directed “remake” is actually one of the great Dwayne Johnson vehicles from the WWE era (they produced this as well as his other early era actioners The Scorpion King and The Rundown).  All of the clichés still inherent within that particular style of filmmaking still holds true.  With that Walking Tall still manages to be one of the best of Johnson’s filmography.  As long as one is not looking for a straight remake of the earlier film, you’ll be happy with what Johnson and Company are cooking.

Military Special Forces vet Chris Vaughn (Johnson) returns home to the non-descript pacific northwest town he grew up in. Quickly Chris sees the hometown he left is filled with drugs, gambling, prostitution, and all other manner of felonious behaviors.  As though Chris himself were the rock that levied the troubled waters at bay.  Those trouble waters take the form in the whiteness of Jay Hamilton (Neil McDonough).  Hamilton attempts to lure Chris and his friends on his side with gambling and women.  What Hamilton does not understand is that Chris finds righteousness and justice sexier than roulette and strippers.  Things quickly escalate as Chris is tortured and left for dead by Hamilton’s goons.  Chris recovers with the help of his family and best friend Ray (Johnny Knoxville), not only to win a trial but to run a campaign for Town Sheriff.  Now it’s only a matter of time until the bad (the whiteness of Hamilton) and the good (the multi-culturalism of Chris).

Many with a working knowledge of the oeuvre of WWE Films will be quite familiar with the rhythms and story beats of Walking Tall. What separates the movie from say The Chaperone or The Marine is Dewayne Johnson and the production crew the film.  Johnson here is in full-on Super Star charisma mode.  The actor pushes himself farther than his contemporaries (at the time) because he cared about the film writ large.  A just a canny persona in the wrestling ring circa 2004, even at this point Johnson understood it would take more than just his particular brand of “ass-whuppin’” to really push the film beyond B-Movie fodder.

Walking Tall is designed to be an Action Star vehicle from beginning to end.  But an Action Star vehicle the way they made them at their very best for Schwarzenegger or Stallone circa 1985 (re Raw Deal, Cobra).  They were not smart but they were made with skill and the sort of blunt force trauma style entertainment that smashes you over the head with its obviousness.  In the film, you know Johnson will triumph over whatever douche bag that is in front of him, but it’s all in the way its executed.  Director Bray and the four credited screenwriters (David Klass, Channing Gibson, David Levin, and Brian Koppelman) understand we need a build up to Chris Vaughn kicking ass and taking names.  The script and direction are smart enough to know to allow for Johnson to come in swinging, and tell the story in a streamlined no-frills way that comes off better fifteen years later than may have when initially released.

They also know that Chris needs support and to care for something.

The film gives Chris the support and that something to care for in the form of the supporting characters.  Many films of this ilk trade in clichés, the one does have a few, but the screenwriters manage to create a healthy cast of supporting roles, both good and evil, for Johnson’s Chris to play off of.  By far the best (re interesting) character is Ray, Chris’s best friend, played by Johnny Knoxville.  Knoxville brings a surprising amount of subtlety along with his brand of crass humor and charisma to the role.  That manic energy seems to bring out the best in Johnson as their chemistry is by far and away more palpable than his romantic lead.  Ashley Scott as the love interest Deni is stranded having one of the two cliché-ridden written roles.  Scott does what she can but the “stripper with a heart of gold” is just too much for her or anyone for that matter to act their way out of.  The other cliché role comes in the form of Moral Compass father Chris Sr. played by the always great and reliable John Beasley.  Beasley takes bad line after bad line and turns them into moral platitudes that actually work.  McDonough as Hamilton along with turns by Michael Bowen, and Kevin Durand are appropriately evil but with the right spin to make them each interesting beyond the clichés of Big Boss, Corrupt Sheriff, and Right Hand to the Big Boss.

Walking Tall is not original nor is it the faithful remake one may want.  What it is, is a well-oiled machine of ass kickery.  Bray and his gang of screenwriters understand what their film is and what is required of them to make it work better than most.  The film’s ‘light the fuse’ and let the ‘bomb go off’ style of storytelling is highly effective.  Especially when that ‘Bomb’ is Dewayne Johnson and when it explodes as it does in Walking Tall… Holy hell is it awesome.

The transfer is decent and without any sort of blemishes.  The transfer is dated as it has only minor issues with Black Levels and Sharpness.  Even with adjusting my set (I’m watching from a Sony 65” XBR-65Z9D) I couldn’t ever really get it perfect.  Though the transfer definitely has a nice healthy grain structure that gave it that film effect that many, myself included, love.  Think of this one as a nicely aged archival print.

MVD Marquee Collection has done the right thing and ported over all the special features from the mid-2000’s DVD.

The best feature on this disc is the commentary by Dwayne Johnson.  The commentary recorded back in 2004 is a time capsule of sorts.  The unguarded soon-to-be Super Star is relaxed, joking and talking a lot of shit.   It’s actually the first thing that genuinely made me like Johnson and turned the tide from being a casual fan to fanboy for The Rock (as he was known at the time).  For the 72 minute commentary, Johnson manages to constantly joke about Beasley being George Foreman, talk about his topless scene in the film, and bust the balls of just about every male actor in the film.  It’s a truly magnificent commentary having very little to do with the film, something more akin to John Carpenter and Kurt Russell’s commentary for Big Trouble in Little China.

Fight the Good Fight is the sole featurette of substance is the 9-minute behind-the-scenes look at the fight scenes.  It’s more of an EPK style featurette rather than a deep dive into the stunts and fight choreography.

The Alternate ending is about 1-minute long and really doesn’t add much to the proceedings.  It’s not a shocking twist ending.  Just added a bit more.

The Bloopers is literally 45-seconds of line flubs, nothing to write home about.

The Deleted scenes amount to 3 scenes amounting to about 2-minutes of run time.  Again nothing added to the film other than some slight character development.

Rounding out the special features are a still gallery and the theatrical trailer.

Pop some popcorn.  Butter those popped kerns to an inch of their lives.  Because Walking Tall is as buttery a good time as you can get from a B-Movie Ass Kicking Action Film.  We can smell what Dewayne Johnson was cooking and it was Popcorn and Beatdowns and… we loved every single second of it no matter the clichés.  MVD Marquee Collection packs in some great special features that make this a…  HIGHLY RECOMMENDED!!!