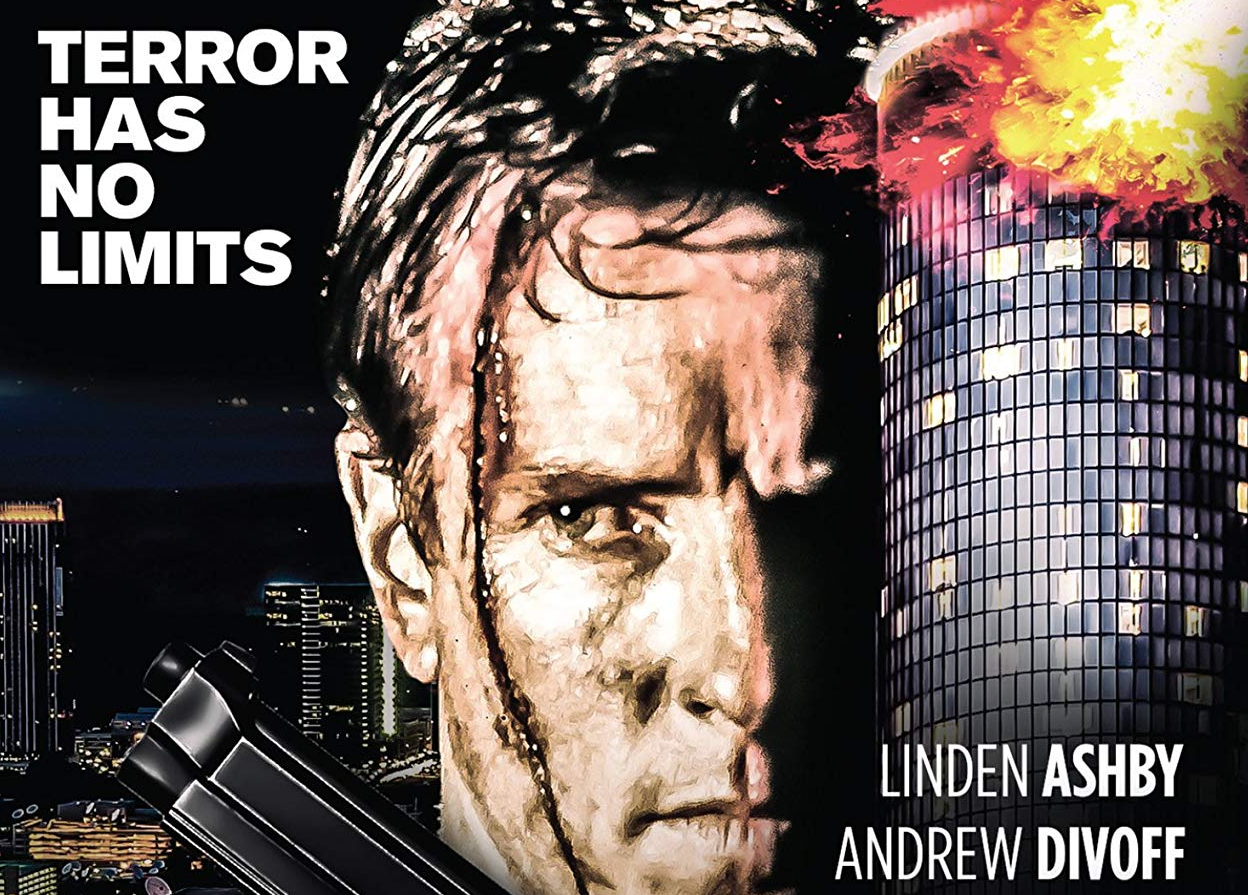 Adam faces off against Albert Pyun’s Die Hard in an Olympic Swimming Training Facility Blast. Making its Blu-Ray debut courtesy of the fine folks at MVD and their new Marquee Collection.

The King of the Direct-to-Video action thriller, Albert Pyun brings us the “Die Hard in an Olympic Swimming Facility” we never knew we needed.  Or wanted.  Or cared about.  Or even dreamed would be made.  This is Pyun’s style; create the D-Grade Action Extravaganzas on a zero budget that copies (re rips off) a more lavishly produced film.  As proven by his continual work over the last four decades has proven, we love him for it, though many will not admit to this.

Taking place in 1996 on the Eve of the Atlanta Summer Olympics, Ex-Olympic Tae Kwon Do fighter turned Janitor Jack Bryant (Linden Ashby) must to stop renowned terrorist Omodo (Andrew Divoff).  Omodo nee Luis Cali seems to have survived his face off against the teens of Toy Soldiers to concoct another lunatic plan to hurt “the Americans”.  What is Omodo’s plan you ask?  Simple really; hold the American Olympic Swim Team hostage until his demands are met. His demands?  Billions of Dollars of course.  If they are not met?  Omodo and his expert teams of Mercs will not only murder the Swim team but blow up all of the other Olympic Facilities.  Bryant is the only man in the way of Omodo accomplishing his goals.  To further complicate matters Bryants Ex-Wife, a former Olympic Swimmer turned Assistant Coach, is one of the hostages.  Like John McClane, Casey Ryback, and John Cutter before him, Bryant must take out not only megalomaniacal genius Omodo but his gang of highly trained paramilitary mercs.

God love Albert Pyun.  There was never a film or plot from another film he didn’t love to homage (re rip off) in his films.  Blast is so close to Die Hard, Passenger 57 and Under Siege, their screenwriters should have gotten co-credit on the script. Yes, this is a low-rent rip off for sure but Pyun gives us such a strange take on the conventions and troupes of the “Die Hard in/on/with/going to _____” Pyun takes Blast from a standard Direct-To-Video action film to compelling to watch.

Part of the fun of Blast is making sense of the choices Pyun and Company have made both with the story and production.  Many of the plot’s turns seem designed to just buck the convention without follow through.  Certain characters die but without any real recourse, just because in other movies their “stereotype” survived.  The ending which does not our main protagonist is so quickly done you think that there has to be more, there isn’t.  It’s these big touchstones that will have one pausing the film and contemplating what they’ve seen but in the best way possible.  Visually, it is one of Pyun’s best features.  The film looks to have been directed and shot by Tony Scott at a YMCA over a weekend.  Which sounds like a dig but is not when you consider Scott could make anything cinematic. Pyun and Company do just that with their enclosed five location.  Pyun and cinematographer George Mooradian create a visual look that feels bigger than the film really is.  The work is polished and refined in a way that will surprise many.

Blast would not be a Pyun film if it did not have at least one deranged performance.  That comes in the form of Rutger Hauer’s FBI Special Agent Leo. Hauer’s entire performance seems to be based on his decision to wear Pippi Longstocking pigtails.  Yes, Pippi Longstocking pigtails that Hauer unironically wears through the entire film. When he isn’t mumbling indecipherably like he was late era, Marlon Brando, Hauer seems to be in an entirely different movie.  One isn’t even sure he’s playing an FBI Agent, albeit for the last two minutes of his performance.

To call Blasta bad film would be doing it a terrible disservice.  Blast is a highly entertaining action thriller that gives you almost dogmatically what it sets out to make; A Die Hard in an Olympic Swimming Training Facility.  Do not judge the movie on its filmmaking acumen but for its delirious need to entertain you.  Like Pyun’s Cyborg before it, Blast is more than the sum of its parts. Rather as Gene Shalt would have said, “Blast is a BLAST!”

The high definition transfer that was given to MVD is definitely an early era transfer but from the sampling of the older sources, this is a vast improvement across the board.  The transfer is generally sharp, though faded a bit, unfortunately, cannot tell if its an artifact of the transfer or the actual negative.  The transfer by default looks more like a pristine archived 35mm print that was made years ago.  It actually adds to the enjoyment of the film.

Fans of Direct-To-Video Action thrillers rejoice, Blast is great ride worth the price of admission. MVD and their Marquee Collection branch are making splashy choices that will reward them greatly if Blast is the kind of Z-Grade fun their lesser known titles have in store for us. Recommended!!!